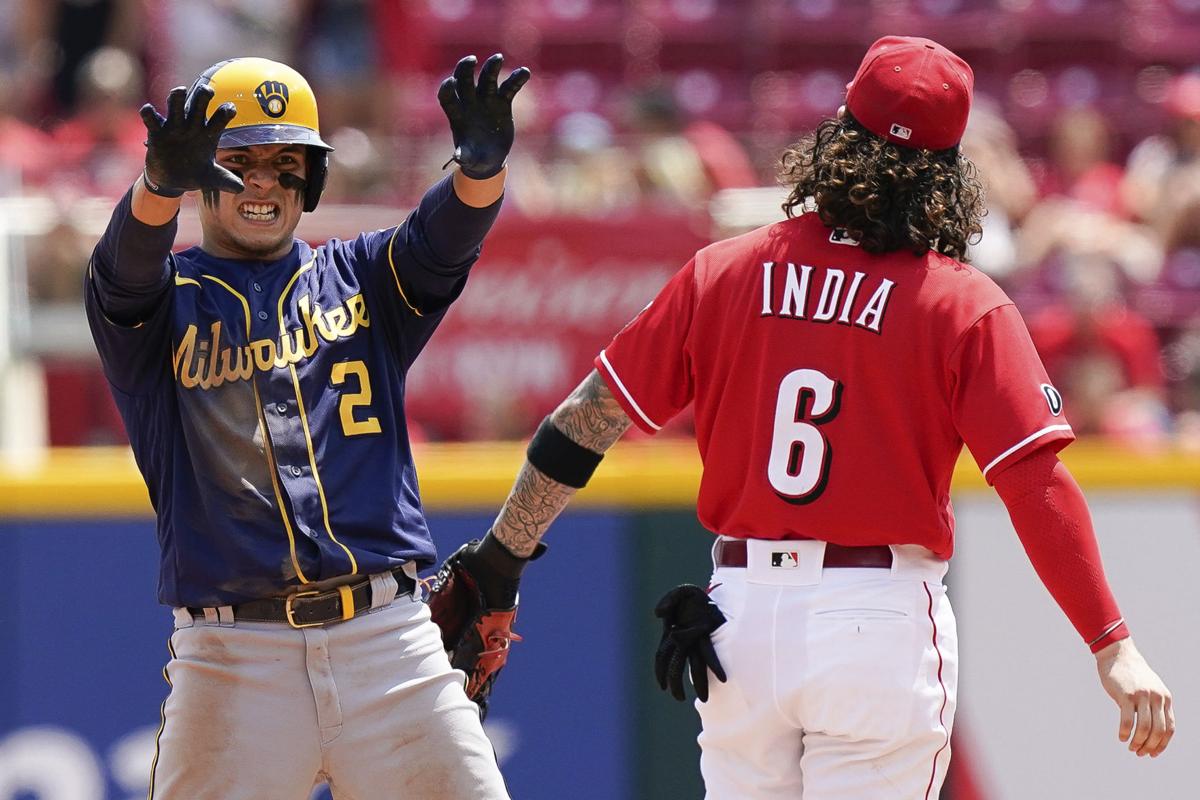 Brewers' Luis Urias celebrates after singling and moving to second on an error during the fifth inning Sunday. Milwaukee outscored Cincinnati 26-10 in sweeping the three-game series. 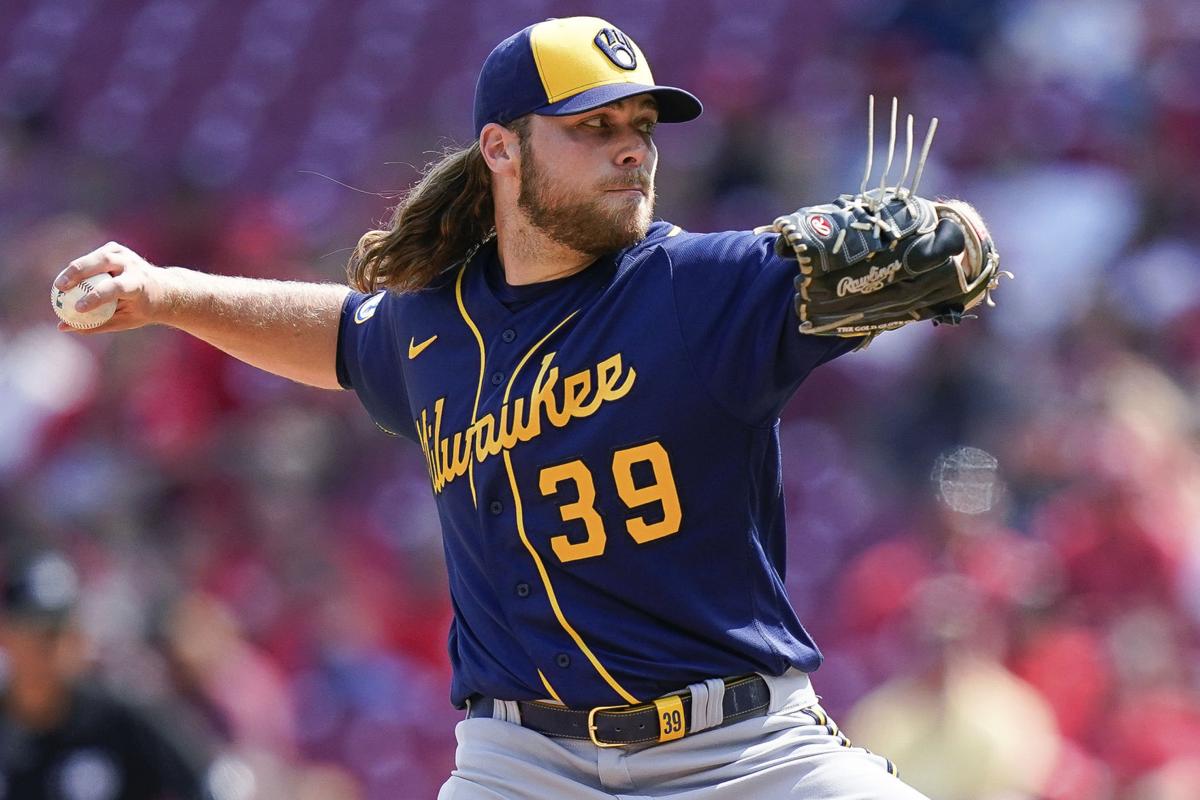 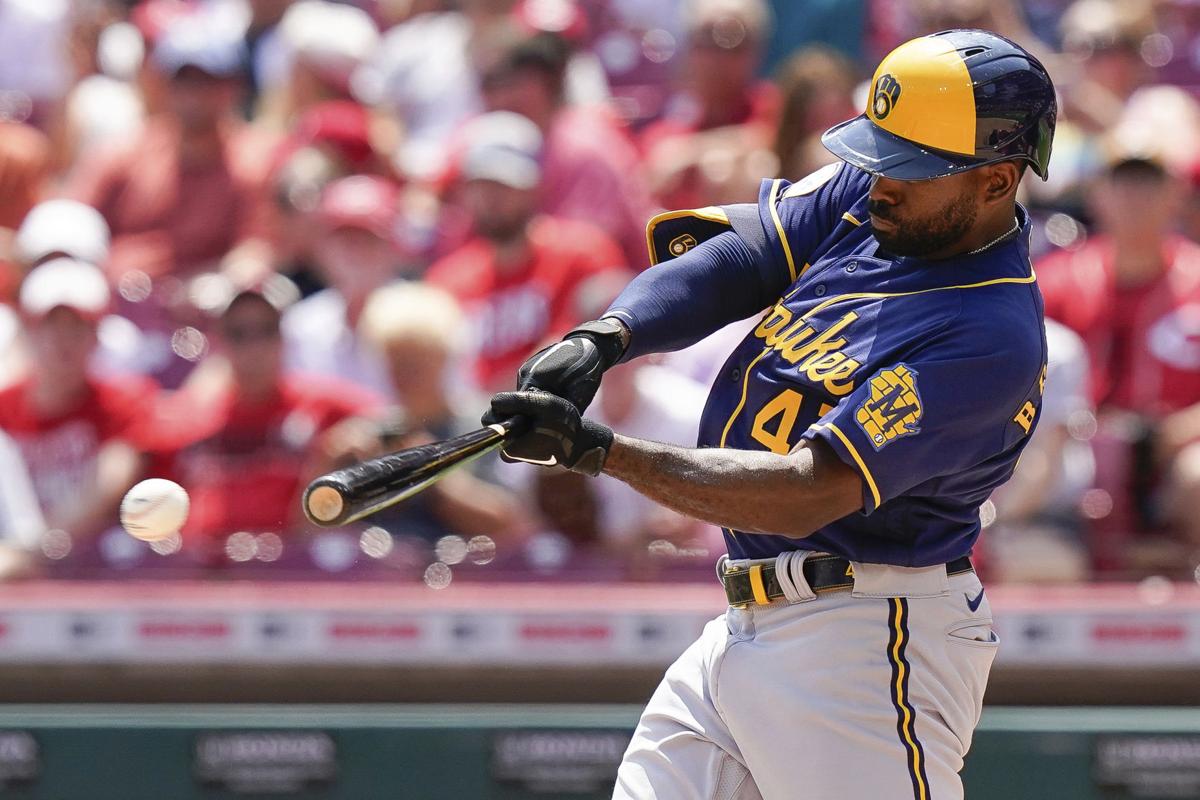 Jackie Bradley Jr. lines a two-run triple to give the Brewers a 5-0 lead in the fifth inning.

CINCINNATI — Back from the All-Star Game, Corbin Burnes looked more like an All-Star.

Burnes returned to form, pitching sharply into the ninth inning Sunday as the Milwaukee Brewers cruised to an 8-0 win and finished a three-game sweep of the Cincinnati Reds.

The NL Central-leading Brewers won four of the seven games against Cincinnati spanning the All-Star break.

“To get our lead in the division up to seven games is huge, knowing we’ve only got three more against them (this season),” Burnes said. “We’ve got to keep playing good baseball. We’ve got a couple off days here this week, so we can keep everyone fresh and keep everyone feeling good going into August.”

Burnes (5-4) dominated in his first outing since he was the losing pitcher for the National League in Tuesday’s All-Star Game, when he went two innings and gave up two runs, including a 468-foot homer by Vladimir Guerrero Jr.

Burnes struck out 12 while allowing five hits and a walk in 8⅓ innings Sunday, lowering his ERA to 2.16. He didn’t allow a runner past first base until Cincinnati loaded the bases with one out in the ninth on two singles and an error.

Reliever Angel Perdomo came on to strike out Eugenio Suárez and Kyle Farmer to preserve the shutout.

“He wasn’t quite in sync the first inning, but innings two through eight — really two through nine — he was on cruise,” Milwaukee manager Craig Counsell said. “Just every pitch executed, ahead in the count, just really, really good.”

Burnes had superb control of his cutter and with his pitch count in the 70s in the seventh inning, started thinking he could get a complete game. He’s never had one in 29 starts over four seasons in the majors.

“It wasn’t something on the front of my mind to go as long as I could today, but whenever I can do that, it always helps,” he said.

Christian Yelich hit a solo homer in the seventh and Willy Adames added a two-run shot in the ninth. Tyrone Taylor and Jackie Bradley Jr. each drove in two runs in a four-run fifth.

Sonny Gray (2-5), who has been on and off the injured list with strained muscles around his rib cage, got the start and did fine until the Brewers got busy in the fifth.

“In the fifth inning, I missed on a couple close pitches and it continued to spiral,” Gray said.

The Reds open a series with the NL East-leading New York Mets on Monday. After that comes seven games against teams that are right behind them in the division, the Cardinals and the Cubs.

General manager Nick Krall said the Reds “absolutely” will be buyers at the July 31 deadline, but this stretch could determine how aggressive he’s willing to be.

Reds: All-Star right fielder Nick Castellanos missed a second game since getting hit by a pitch on the right wrist. Manager David Bell said he’s not expected to be out much longer. ... Right-hander Michael Lorenzen will go on the injured list Monday with a right hamstring strain. He pitched a scoreless inning on Saturday night in his first action of the year after nursing a sore shoulder, but pulled up lame while scoring the tying run in the 10th inning.

The Reds loaded the bases in the bottom of the 11th, but with an empty bench, manager David Bell sent pitcher Wade Miley up to pinch hit for reliever Ryan Hendrix. He grounded out to second to end the game.

The Brewers had no update on reliever Brad Boxberger, who had to leave Saturday night’s game with shoulder stiffness after pitching to one batter in the eighth.

After an off day, Brewers left-hander Eric Lauer (3-4, 3.83 ERA) will be on the mound in the opener of a two-game series with the Royals on Tuesday in Milwaukee. Left-hander Mike Minor (6-8, 5.67) is scheduled to start for Kansas City.

The game time was moved up to 3:10 p.m. so it wouldn’t coincide with Game 6 of the NBA Finals. The Milwaukee Bucks host the Phoenix Suns at 8 p.m. at Fiserv Forum.

Milwaukee pitchers Corbin Burnes and Freddy Peralta and catcher Omar Narvaez had their struggles before becoming All-Stars this season.

Milwaukee’s weekend sweep at NL Central rival Cincinnati improved the Brewers’ road record to 29-18, the best in the majors.

The Brewers make a pair of errors that caused Kansas City's first five runs to be unearned in the Royals' 6-3 victory, their fourth in as many meetings this season.

Tyrone Taylor hit a grand slam to cap the Brewers’ six-run outburst in the seventh inning of a 7-1 victory over the White Sox on Friday night.

Brewers' Luis Urias celebrates after singling and moving to second on an error during the fifth inning Sunday. Milwaukee outscored Cincinnati 26-10 in sweeping the three-game series.

Jackie Bradley Jr. lines a two-run triple to give the Brewers a 5-0 lead in the fifth inning.