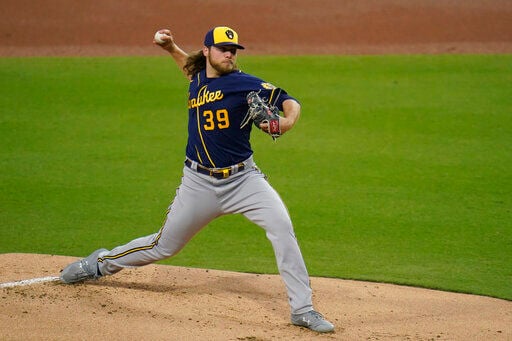 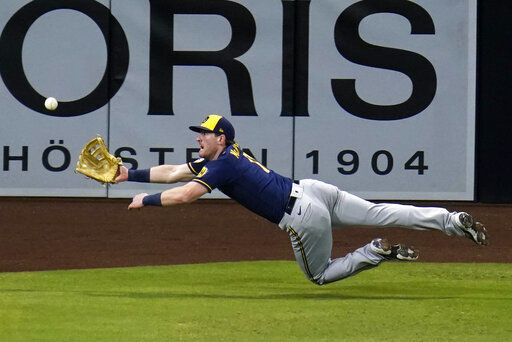 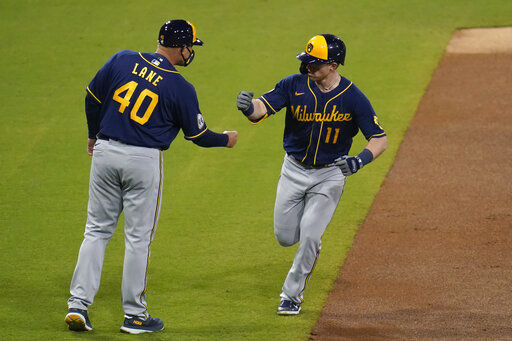 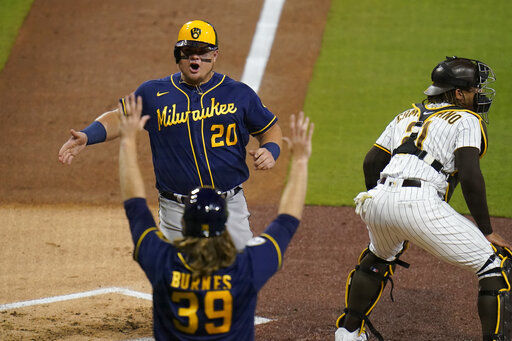 Milwaukee Brewers' Daniel Vogelbach (20) celebrates with teammate Corbin Burnes (39) after they both scored off a two-RBI double by Travis Shaw as San Diego Padres catcher Luis Campusano waits for the throw, right, during the third inning of a baseball game Tuesday, April 20, 2021, in San Diego. (AP Photo/Gregory Bull) 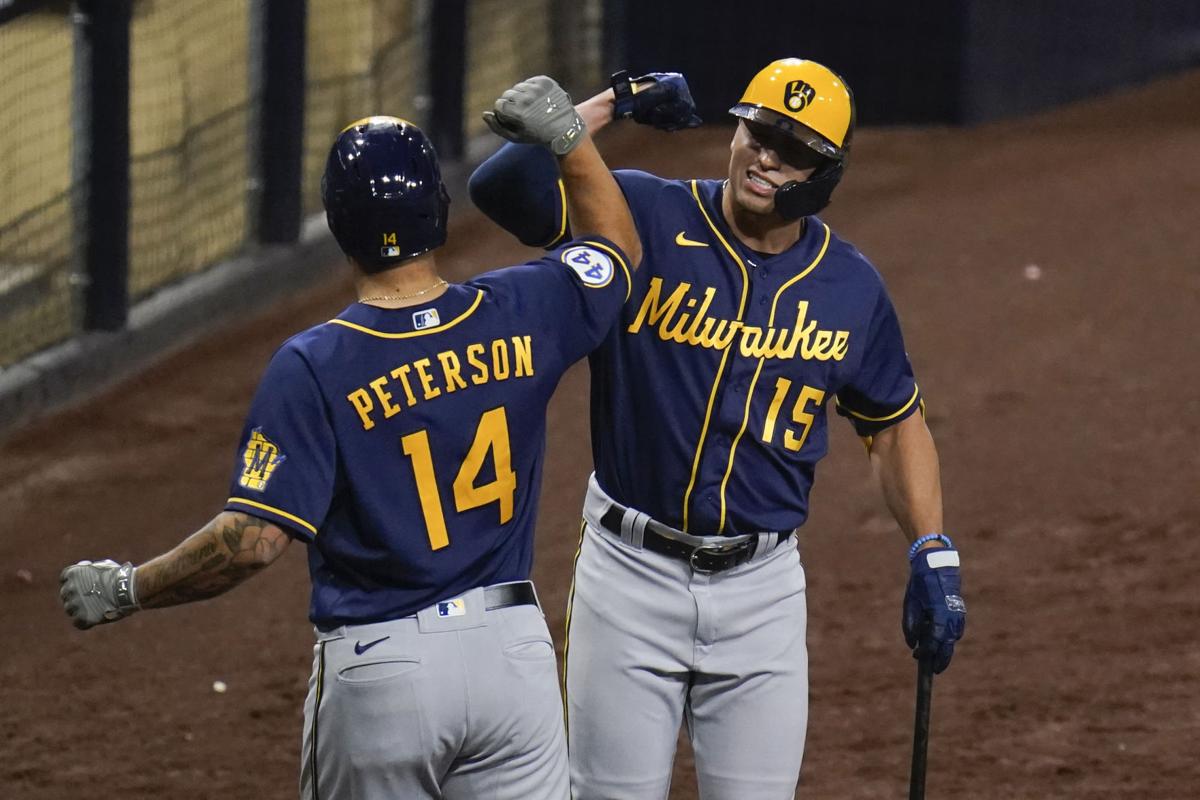 Brewers' Jace Peterson is greeted by Tyrone Taylor after hitting a home run during the ninth inning Tuesday night in San Diego.

SAN DIEGO — Corbin Burnes struck out 10 in six spotless innings, extending his incredible start to the season, and the Milwaukee Brewers blanked the short-handed San Diego Padres 6-0 on Tuesday night.

After four starts this year, Burnes has an unimaginable 40 strikeouts and no walks. He was already the only pitcher since 1900 to whiff 30 batters without issuing a free pass through his first three starts of a season.

"I have heard it from everyone in the clubhouse so it is kind of hard to escape it right now," Burnes said. "We will kind of reflect on it tonight and enjoy it and then we are back at it tomorrow."

Billy McKinney homered to spark a five-run third against Chris Paddack that included a two-run double by Travis Shaw and a two-run single from Omar Narváez. McKinney also made a diving catch in left field that likely saved two runs.

"It feels good keeping the game at zero right there," McKinney said. "Just how well (Burnes) did, he deserved to put up a zero after his performance tonight."

Jace Peterson went deep in the ninth against his original team.

Burnes (2-1), a native of Bakersfield in Southern California, lowered his ERA to a miniscule 0.37. He gave up four hits against a lineup missing Manny Machado and Fernando Tatis Jr.

Milwaukee batted around against Paddack (1-2) in the third. He lasted five innings, giving up five runs (four unearned) and five hits while striking out seven.

McKinney led off the third with a home run to center field. With one out, Burnes reached safely on a fielding error by second baseman Jurickson Profar. Four batters later, with two outs and the bases loaded, Shaw ripped a fastball into the right-field corner to make it 3-0. Narváez followed with a sharp single to score two more.

"We've got two outs and there is a whole bunch of good at-bats," Brewers manager Craig Counsell said. "The Padres are a good team. They have good pitching, too, and they have a tough lineup. So you come in here and take a couple of games, it is a good series. A chance to sweep a series tomorrow is as much as you can ask for, for sure."

With two outs in the fourth and Padres runners at the corners, McKinney made a diving catch on a full sprint of a curling line drive near the left-field corner hit by Wil Myers.

"It jammed him pretty good, so it was hanging up in the air. So I thought (McKinney) had a chance and then when he laid out and caught it, it was by far the play of the year," Burnes said. "We definitely had to grind out the fourth and fifth innings. I kind of lost the feel for the breaking stuff, which made it tough to put some guys away."

It was the second consecutive game the Padres offense has been flat. Machado and Tatis, both banged up, did not start. Tatis pinch-hit in the seventh and singled.

Brewers: SS Luis Urias was out of the lineup a night after leaving the game when he cramped up on his home run trot. Milwaukee manager Craig Counsell said Urias has some discomfort in the back of his knee, where the hamstring connects, and is day to day. “It’s minor, but reason to be cautious,” Counsell said. ... 2B Kolten Wong (left oblique) is going full bore in his workouts and is on track to be activated during a weekend series at the Chicago Cubs.

Padres: LHP Adrian Morejon needs reconstructive surgery on his elbow. No date has been set, but it will be performed by Dr. Neal S. ElAttrache, head physician for the Los Angeles Dodgers. ... Machado got the night off because he was banged up during an intense weekend series against the rival Los Angeles Dodgers. Tatis was on the bench to rest his left shoulder, which has given him trouble since spring training.

In the series finale on Wednesday afternoon, Brewers right-hander Adrian Houser (1-2, 3.14 ERA) is scheduled to start against Padres right-hander Dinelson Lamet, who will make his season debut. The team has been bringing him along slowly after he left his last regular-season start of 2020 with elbow discomfort and missed the playoffs.

Milwaukee Brewers' Daniel Vogelbach (20) celebrates with teammate Corbin Burnes (39) after they both scored off a two-RBI double by Travis Shaw as San Diego Padres catcher Luis Campusano waits for the throw, right, during the third inning of a baseball game Tuesday, April 20, 2021, in San Diego. (AP Photo/Gregory Bull)

Brewers' Jace Peterson is greeted by Tyrone Taylor after hitting a home run during the ninth inning Tuesday night in San Diego.