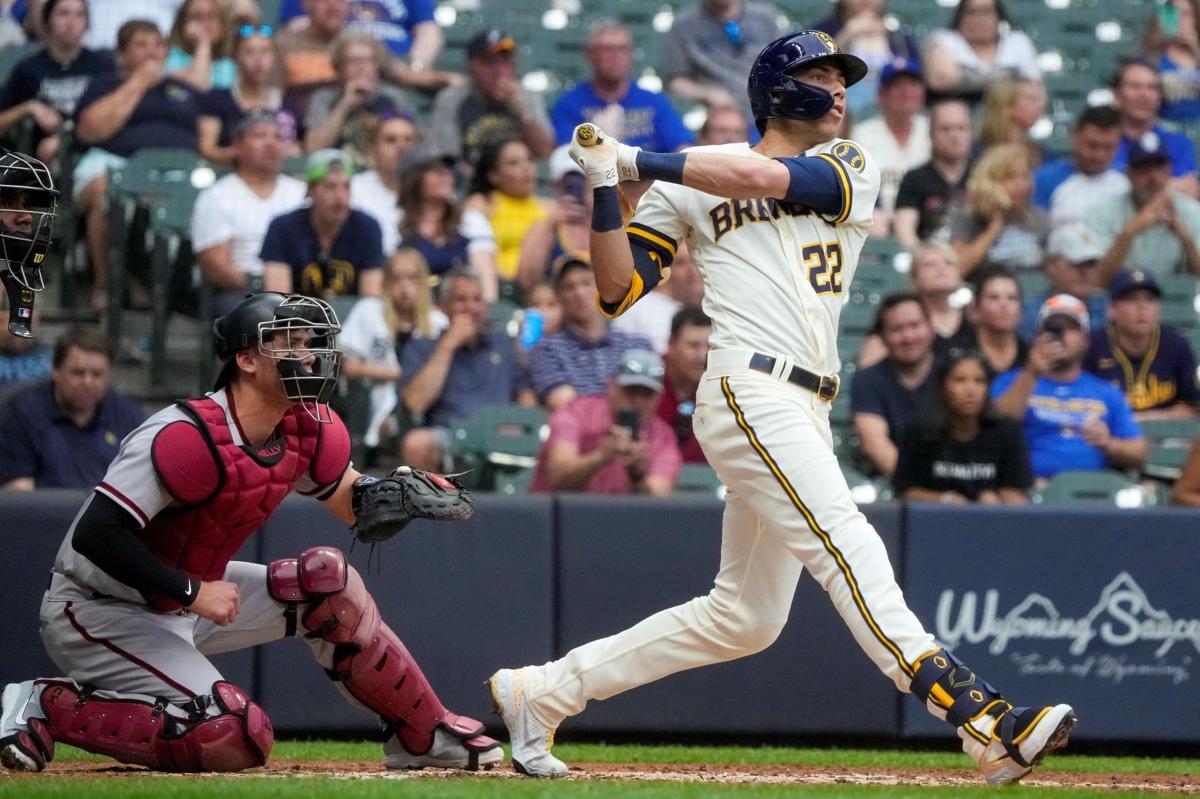 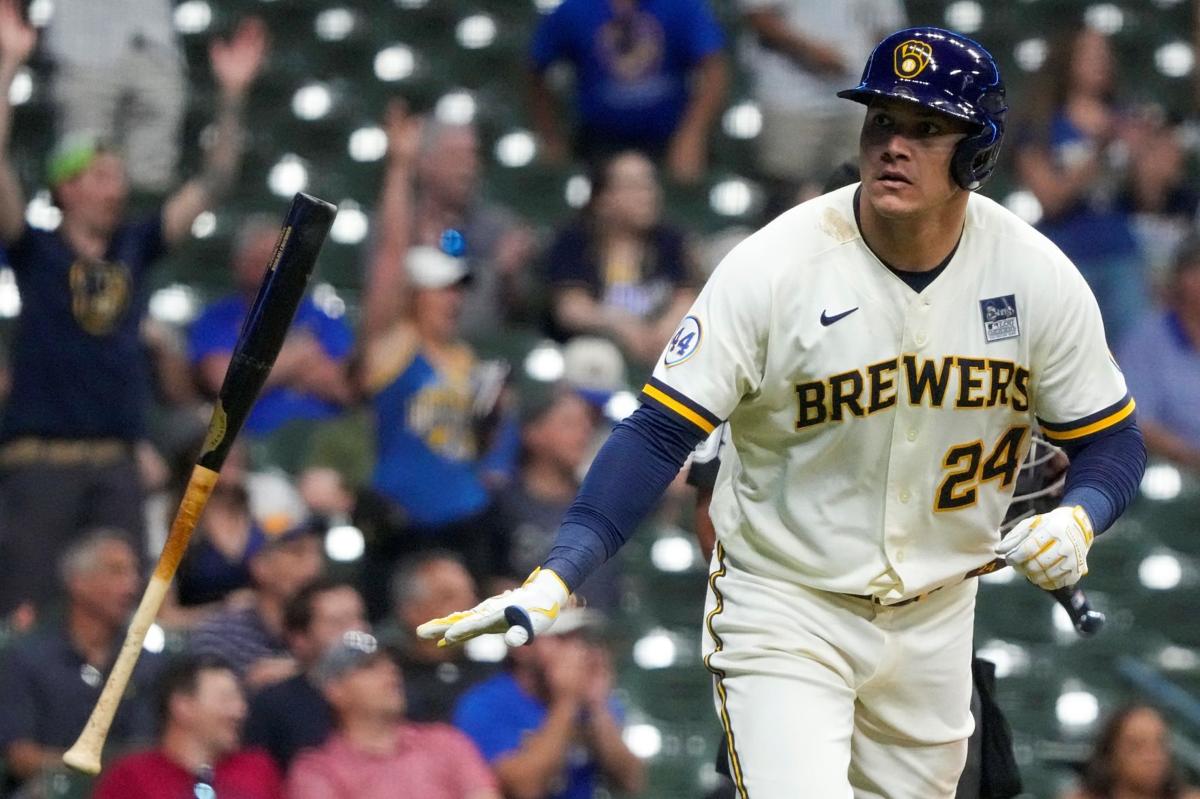 Brewers' Avisail Garcia reacts after hitting a home run during the eighth inning.

MILWAUKEE — Christian Yelich used a new bat and regained the power stroke that has been missing from his game this season.

Yelich hit a three-run home run in the third inning for one of the Milwaukee Brewers' four homers in a 7-4 victory over the Arizona Diamondbacks on Thursday night.

Yelich's blast was just his second homer of the season and came with a new blonde bat rather than the black model he normally uses.

"They've been here for like a week or two and I've been messing around with them," Yelich said. "I broke one the other night, and (Travis) Shaw talked me into using them today. I was like, 'All right.' I'm not really superstitious with what bat I use, so I just took that one up there and it paid off tonight."

Jackie Bradley Jr., Luis Urías and Avisaíl García also homered for the Brewers. Urías' homer was his second in as many games and came on his 24th birthday.

Carson Kelly hit a two-run homer for Arizona, which left 14 men on base and suffered its 14th consecutive road defeat. The Diamondbacks have lost 25 of their last 30 overall and haven't won on the road since a doubleheader sweep in Atlanta on April 25.

"It's frustrating," said Diamondbacks shortstop Nick Ahmed, who went 4 of 5. "It's the worst stretch of losing I've ever been a part of in my whole life."

Milwaukee now has nine homers in its last two games. The power display Thursday helped the Brewers win despite being outhit 13-7.

Yelich and Bradley hit first-pitch homers off Jon Duplantier (0-1) during the Brewers' four-run outburst in the third inning that opened the scoring. Yelich's three-run blast barely cleared the wall in right field.

Although Yelich owns a .391 on-base percentage, he's been missing the power that helped him win the NL MVP award in 2018 and finish second in the balloting in 2019.

His homer Thursday was just his fourth extra-base hit in 24 games this season. He played just one game in a five-week stretch from April 12-May 17 due to a lower back strain. His other homer came off Brad Brach in the ninth inning of a 9-4 victory at Cincinnati on May 23.

"You never know when you're going to turn, so (you) kind of just got to keep plugging and see what happens," Yelich said. "It's kind of what we did."

Brent Suter (6-3) struck out three in 1 2/3 innings of scoreless relief after Brewers starter Brett Anderson allowed eight hits and three runs in 4 1/3 innings. Josh Hader struck out the side in the ninth for his 13th save in as many chances.

Anderson was ejected after the Brewers had already removed him from the game. He had been complaining about home plate umpire Edwin Moscoso's strike zone.

"I was frustrated about not getting ahead, then a couple pitches that weren't called strikes," Anderson said. "If they're not getting called, they can sit on one side of the plate, and my stuff isn't good enough to do that."

Diamondbacks: LHP Madison Bumgarner underwent an MRI that revealed some inflammation to his throwing shoulder. The issue forced him to leave his start against the New York Mets after only two innings Wednesday. Manager Torey Lovullo said team officials haven't yet determined whether Bumgarner might be able to avoid a trip to the injured list, but added that "we're hopeful that could be the case."

Brewers second baseman Kolten Wong left the game in the fourth inning with left oblique discomfort. Wong was on the injured list with a left oblique strain in April. “It’s not bad, but it’s concerning because it’s the same spot that he did earlier this year,” manager Craig Counsell said.

The Brewers recalled left-hander Hoby Milner from Class AAA Nashville. They had optioned right-hander Alec Bettinger to the Sounds on Wednesday.

Brewers first baseman Keston Hiura is 1-for-23 since his recall from Class AAA Nashville.

As the Milwaukee Brewers enjoy a well-earned day off following a four-game sweep of the Diamondbacks, here are three takeaways from a recent h…

Brewers' Avisail Garcia reacts after hitting a home run during the eighth inning.