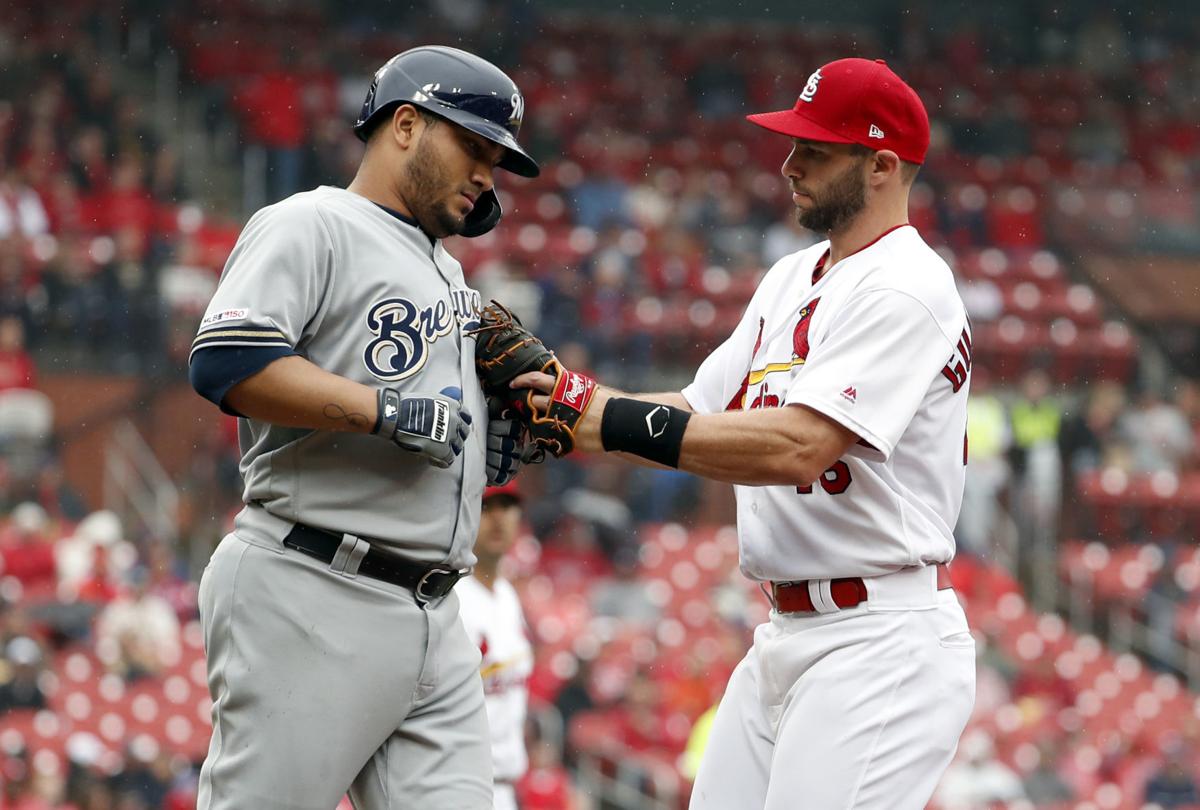 Brewers starting pitcher Jhoulys Chacin is tagged out on his way to first by Cardinals first baseman Paul Goldschmidt during the third inning Wednesday in St. Louis. After getting two hits in the first inning, Milwaukee produced just one over the next seven. 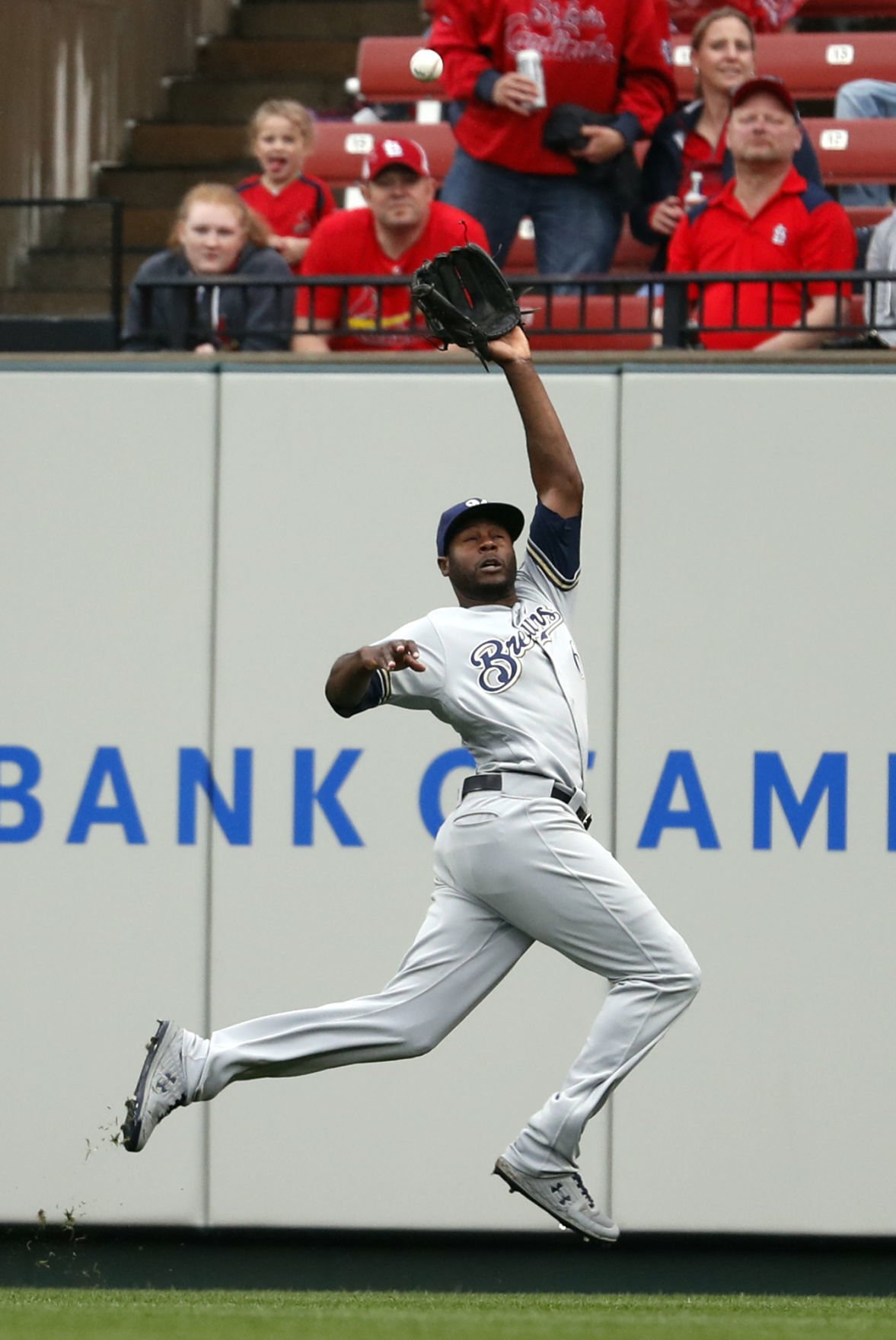 ST. LOUIS — Last August when the 2019 schedule was released, a 13-game gauntlet entirely against the Los Angeles Dodgers and St. Louis Cardinals stood out amid the Milwaukee Brewers’ challenging early-season slate.

After a 5-2 loss Wednesday at Busch Stadium finished St. Louis’ three-game sweep and completed that stretch of the schedule with a 5-8 record, it turned out to be every bit as tough as it looked on paper.

The Brewers lost for the fourth straight game and the seventh time in eight games, falling to .500 (13-13) for the first time since they split the first two games of the season. After beginning the year with eight victories in their first 10 games, the Brewers have lost 11 of 16.

Jordan Hicks preserved the win for the Cardinals with a strikeout of last year’s MVP, Christian Yelich, who had most of the day off but still got a chance to rescue the Brewers. Yelich came up as a pinch hitter with the bases loaded in the ninth inning.

Hicks, known for his 100-mph-plus fastball, only threw one heater out of his five pitches to Yelich, the only batter he faced. He got the strikeout on a 91-mph changeup, earning his seventh save in eight chances.

“I won’t tell you our scouting report, but obviously we’re facing a good hitter,” Cardinals catcher Yadier Molina said. “He’s hot and you’ve got to be smart in that situation.”

The Brewers loaded the bases with two out while trailing 5-1, but manager Craig Counsell elected to stick with Ben Gamel instead of going to Yelich sooner. Andrew Miller walked Gamel to force in a run, setting up the Yelich-Hicks matchup.

“If you put him (Yelich) up in a tying situation, I felt like we were just counting on a home run there, and then Hicks has got some good matchups,” Counsell said. “So this way I thought that one of our other guys had to do the job, and Ben Gamel did the job, and I thought that gave us a real legitimate shot.”

Yelich went 0-for-7 with four strikeouts in the series against the Cardinals.

Eric Thames batted in Yelich’s usual two-hole and homered in his first at-bat. But that’s the only way the Brewers can score of late; when Miller walked Gamel in the ninth inning, it snapped the Brewers’ streak of 23 consecutive runs on homers.

The result is next to no pressure on the opposing pitcher; Elias has data back to 1974, and the Brewers’ six at-bats with runners in scoring position in the series — including two in the final inning of Wednesday’s finale — was a dubious franchise record. They had never logged fewer than seven at-bats with runners in scoring position in a series of at least three games.

“This is the least amount of film work I had to do preparing for a start, maybe in my whole career, because I knew by heart what they had done the whole season because basically we’ve played them the whole season,” said Cardinals starter Adam Wainwright, who earned his 150th career win with six stress-free innings. “Besides looking at hit charts and tendencies on counts, I pretty much had a good plan going in.”

Chacin didn’t allow a hit for the first three innings against the Cardinals before allowing four runs on five hits in the fourth, including home runs to Marcell Ozuna and Molina on fastballs. The Brewers and Cardinals are tied for the most home runs allowed (46) among National League clubs. The Brewers have the NL’s worst overall ERA (5.35) and starters’ ERA (5.84). Chacin’s ERA after six starts is 6.35.

The Brewers are the only team in the NL whose starters average less than five innings per game. Help is coming soon, however, in the form of left-hander Gio González, who agreed to a one-year contract with Milwaukee, a person familiar with the negotiations told The Associated Press.

“He pitched good for us last year,” Chacin said of Gonzalez. “Wherever he can help us to get going, because I think outside of having to get going, we haven’t pitched deep in games. We haven’t put the team in a good position to win ballgames every day.”

St. Louis' three-game sweep of Milwaukee was its first against its NL Central rival since July 1-3, 2016.

Brewers right-hander Chase Anderson (2-0, 3.00 ERA) will get the start as Milwaukee continues its trip against the New York Mets on Friday. Anderson is 2-2 with a 3.94 ERA in six career starts against the Mets.

After some hitting advice from Barry Bonds, Dexter Fowler hit his first home run this season and drove in four runs to lead the St. Louis Cardinals to a 13-5 victory in the opener of a three-game series Monday at Busch Stadium.

Gio Gonzalez is signing with the Milwaukee Brewers, the team he finished last season with, according to multiple reports.

Bellinger robs Yelich of a home run in the eighth inning, then hits a solo shot in the ninth in a 6-5 victory.

Christian Yelich pushed his major league-leading home run total to 13 with a pair of solo shots, and Chase Anderson pitched five strong innings in a spot start as the Milwaukee Brewers beat the Dodgers 5-0.

Down to his final strike with two outs against All-Star Josh Hader, Kiké Hernandez lined a three-run homer over the left field wall to lift the Los Angeles Dodgers over the Milwaukee Brewers 5-3 on Friday night.

Two days removed from another rough outing, right-hander Corbin Burnes is headed to Class AAA San Antonio, where the Milwaukee Brewers are hopeful he'll return to the form that made him one of the franchise's top pitching prospects in years.

Christian Yelich hit his major league-leading 14th home run, tying the record for most before May 1, and Josh Hader needed just 20 pitches to retire six batters Saturday night and close out the Brewers' 8-6 win over the New York.

Back with Brewers, Gio Gonzalez to start Sunday against Mets

Gio González is back after finalizing a $2 million, one-year contract, and the veteran left-hander will start Sunday's series finale against the New York Mets.

Christian Yelich injures back in Brewers' 5-2 loss to Mets

Milwaukee manager Craig Counsell plans to give the reigning NL MVP Monday off.

The struggling slugger hit his first two homers of the season and the Milwaukee Brewers beat the Colorado Rockies 5-1 Monday night at Miller Park with reigning NL MVP Christian Yelich sidelined by lower back soreness.

Brewers starting pitcher Jhoulys Chacin is tagged out on his way to first by Cardinals first baseman Paul Goldschmidt during the third inning Wednesday in St. Louis. After getting two hits in the first inning, Milwaukee produced just one over the next seven.