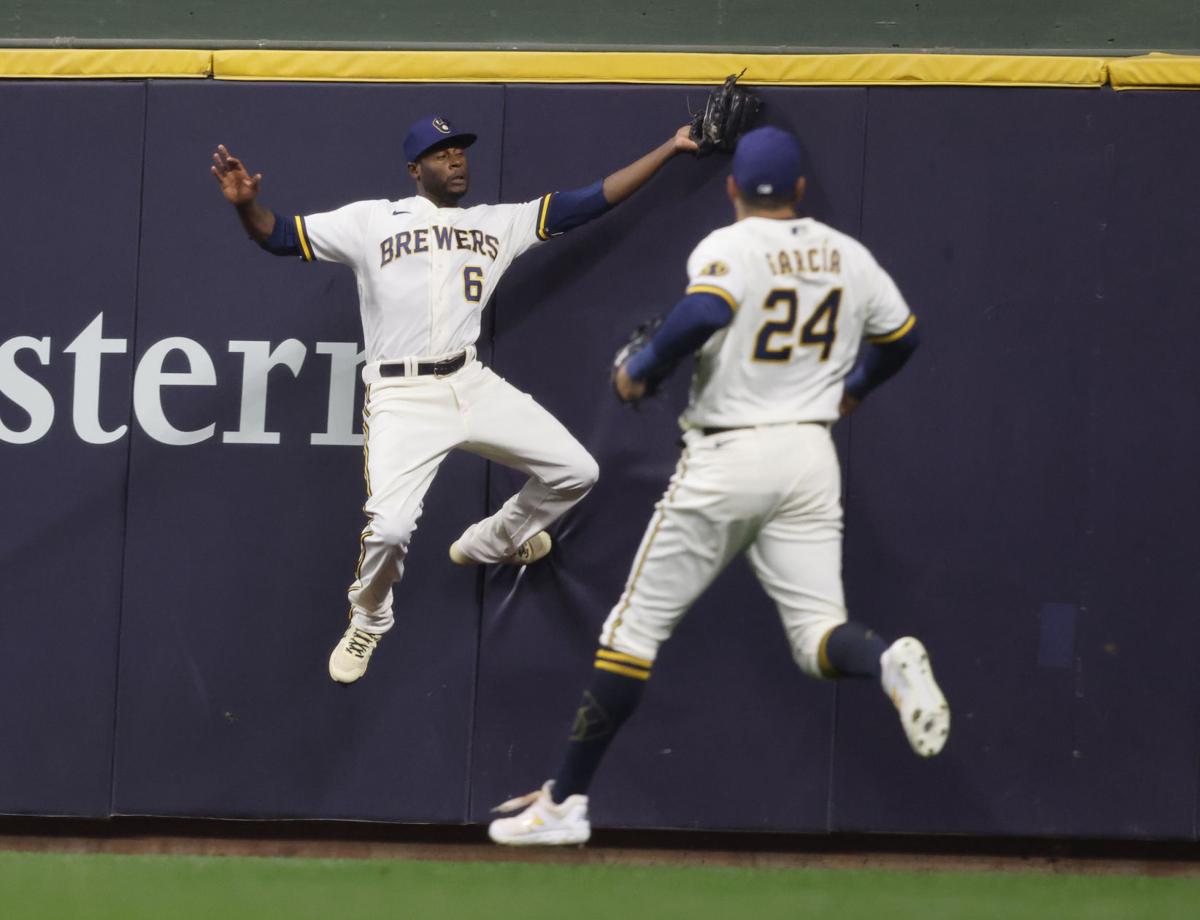 Brewers center fielder Lorenzo Cain catches a ball off the bat of Cardinals' Tommy Edman during the second inning Wednesday. Two St. Louis players tagged up and scored on the play. 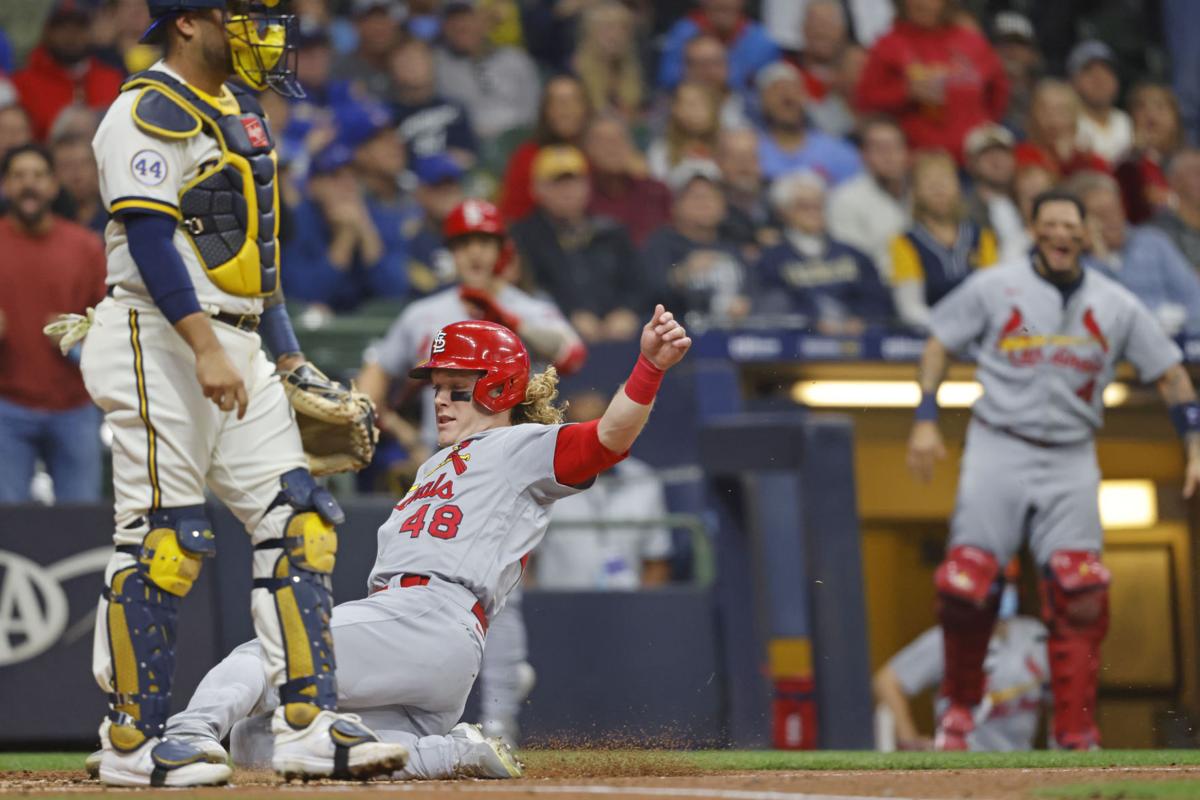 Cardinals' Harrison Bader scores from second base on Tommy Edman's sacrifice fly during the second inning.

The Cardinals’ longest winning streak in franchise history is 14, in 1935 with a team led by Hall of Famer pitcher Dizzy Dean.

St. Louis was 8½ games out of a wild card spot on Aug. 10 before surging. They now lead by 4½ games over Cincinnati and Philadelphia for the final NL playoff slot.

“We grow from the previous days. We grew from today, we’ll get after it tomorrow,” manager Mike Shildt said. “One of the biggest things this team does is just stay present, so it’s just about staying present, keep playing, getting after it.”

The Brewers, whose magic number to clinch the NL Central stayed at three, lead the Cardinals by 8½ games.

“We’re still sitting in a really nice spot. That has not changed. We’ve got to take advantage of it,” Brewers manager Craig Counsell said. “We hit a bump in the road, and that still leaves us in a pretty good darn spot.”

The Brewers clinched their fourth straight playoff berth on Sept. 18, but have since lost four straight, including three to the Cardinals. They have scored a total of only five runs in the three games against St. Louis.

Miles Mikolas (2-2), who missed all of 2020 with an injured right shoulder and a considerable part of this season with forearm tightness, gave up two runs and four hits in seven innings. It was his longest outing of the season.

The left-hander was reinstated from the 10-day injured list to make the start. He had exited his previous start after two innings after being hit by a line drive and suffering a bruised left shoulder.

“Physically, I felt fine. Just command, it took off and wasn’t able to make a pitch to get out of the second inning,” Anderson said.

O’Neill’s 29th home run gave the Cardinals a 2-0 lead in the first. Tommy Edman hit a sacrifice fly in the second that drove in two runs — runners were able to score from third and second after center fielder Lorenzo Cain crashed into the wall as he made the catch and fell to the ground.

Goldschmidt hit a 433-foot home run, his 27th, off Hunter Strickland in the eighth. The Cardinals got 15 hits, including two each by O’Neill, Nolan Arenado, Edmundo Sosa, Dylan Carlson and Harrison Bader.

Mikolas retired 12 of the first 13 batters he faced. He made his eighth start of the season and his seventh since being activated Aug. 20.

The 33-year-old right-hander, a 2018 All-Star, pitched 5⅔ shutout innings in his last start, a win over the Padres.

Avisaíl García hit his 29th home run of the season off Mikolas in the seventh.

Jace Peterson, who started the game at first base, pitched a scoreless ninth for Milwaukee.

Cardinals: Right-hander Jack Flaherty will start the second game of Friday’s doubleheader in Chicago against the Cubs, Shildt said. Flaherty went on the 10-day IL (right shoulder strain) on Aug. 25. ... Arenado left the game in the fifth inning with lower back tightness. In the second, he made an underhand catch of a popup before flopping onto the roll of tarpaulin in foul territory in left field to retire Omar Narváez.

The four-game series ends Thursday afternoon with Cardinals right-hander Adam Wainwright (16-7, 2.89 ERA) facing Brewers righty Adrian Houser (9-6, 3.43). The 40-year-old Wainwright, who has pitched 196⅓ innings, won five straight starts until a no-decision in his last outing. Houser struck out seven and gave up three hits in a complete-game shutout in his last start against the Cardinals, on Sept. 4.

The Brewers, whose magic number to clinch the NL Central stayed at three, lead the Cardinals by 9½ games.

Milwaukee's ninth-inning rally fell short and the magic number for wrapping up its first NL Central title since 2018 remained at three.

The former outfielder is inducted alongside pitchers Yovani Gallardo and Francisco Rodriguez.

The day focused primarily on Ryan Braun's many Brewers highlights, but he also addressed the low point of his career, his 2013 suspension for his involvement in the Biogenesis scandal.

Because of what happened in 1996, the Dodgers and Giants can sweat all week, and the team that does not win the NL West will find itself facing St. Louis ace Adam Wainwright, rested and ready.

Brewers center fielder Lorenzo Cain catches a ball off the bat of Cardinals' Tommy Edman during the second inning Wednesday. Two St. Louis players tagged up and scored on the play.

Cardinals' Harrison Bader scores from second base on Tommy Edman's sacrifice fly during the second inning.