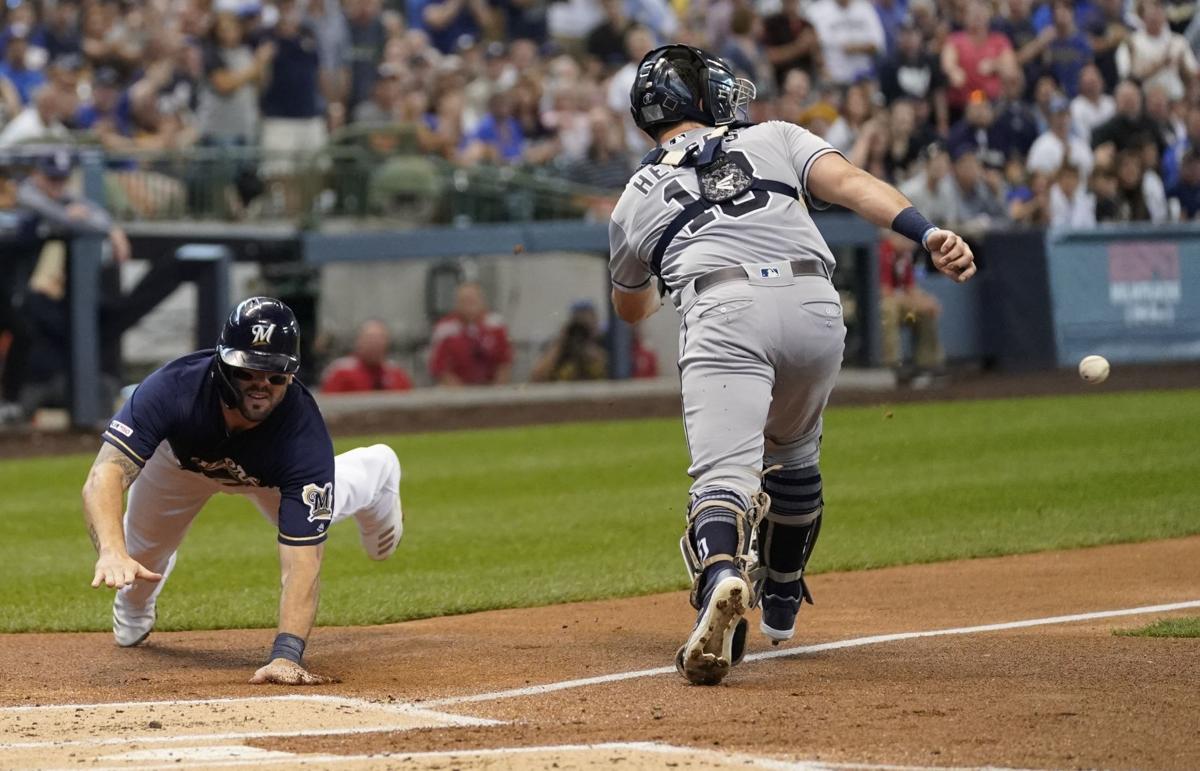 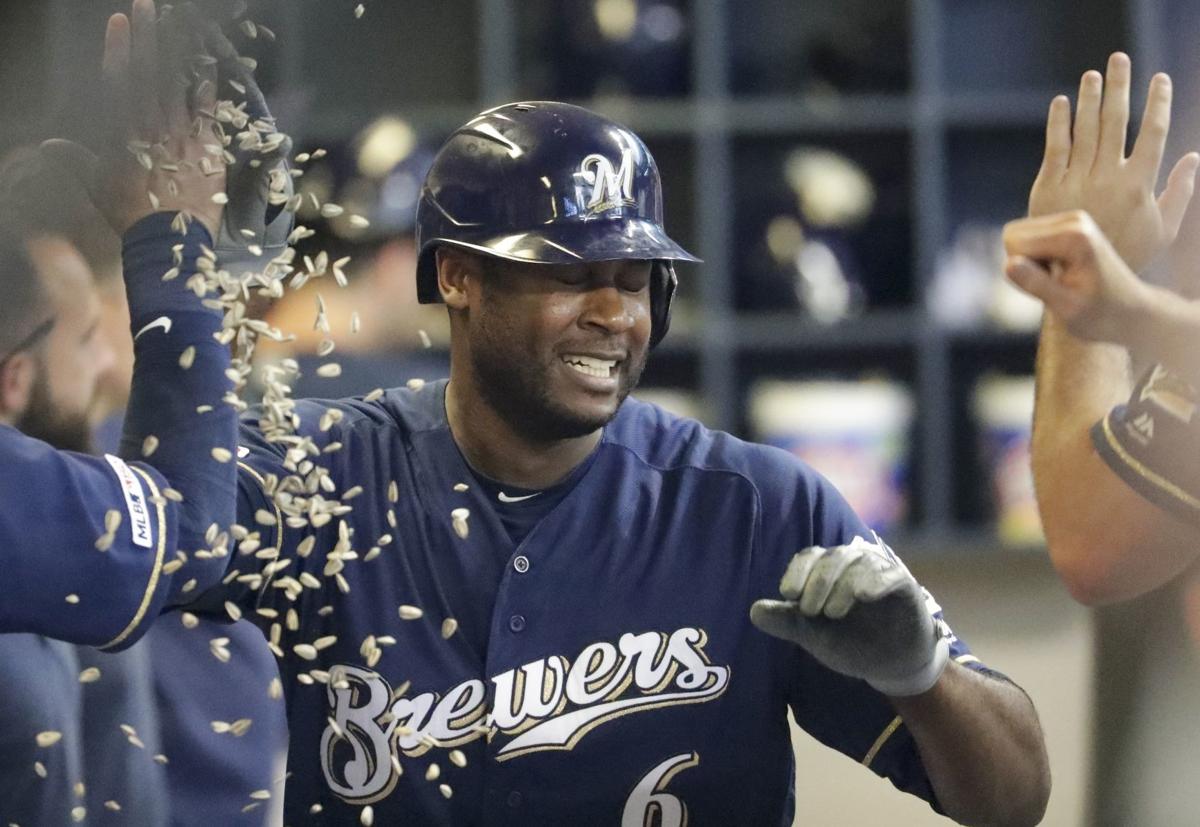 Lorenzo Cain is congratulated after homering against Padres starter Joey Lucchesi in the fourth inning.

MILWAUKEE — Milwaukee Brewers outfielder Lorenzo Cain has had his share of aches and pains this season. He managed to do some damage to the San Diego Padres before departing with another ailment.

Cain hit a solo home run to help lift the Brewers past the Padres 5-1 on Thursday before exiting the game with a sore left ankle.

Milwaukee moved within one game of Washington for the top NL wild card spot and took over sole possession of the second wild card after the Chicago Cubs lost 5-4 in 10 innings to the NL Central-leading St. Louis Cardinals. The Brewers remained three games behind St. Louis.

Cain, who is expected to undergo more tests, has also dealt with a sore thumb this season and has been playing despite lingering knee pain.

“It’s been a rough year as far as the injuries,” the veteran center fielder said. “We’ll see what happens. I plan on being out there.”

While Cain provided some offense, Milwaukee pitchers combined to strike out 16 and the Brewers improved their playoff position.

The Brewers are 7-2 since reigning NL MVP Christian Yelich broke his right kneecap on a foul ball.

“We understand it’s not going to be easy,” Cain said. “Hopefully, we can find a way to win the division or sneak in the playoffs somehow.”

Ryan Braun, who struck out with a runner on second to end a 2-1 loss to the Padres on Wednesday night, put Milwaukee ahead with an RBI double in the first inning off Joey Lucchesi (10-9). The Brewers added a run in the third when Keston Huira doubled and later scored on Lucchesi’s wild pitch.

Eric Hosmer’s leadoff homer in the fourth against starter Jordan Lyles made it 2-1.

Cain then lined a home run to left in the fourth.

The Brewers scored twice in the sixth when pinch hitter Travis Shaw walked and scored on a double by Trent Grisham, who replaced Cain. Grisham hustled to third on the throw to the plate and came around to score as catcher Austin Hedges’ throw sailed into left field.

Lyles, acquired from Pittsburgh on July 29, turned in another effective, although short, outing in limiting the Padres to three hits and one run in 4⅔ innings. He struck out nine, including six in a row.

“We created some opportunities against (Lyles) but that’s too many punchouts to win a baseball game,” Padres manager Andy Green said.

Freddy Peralta (7-3) struck out three of the four batters he faced. Josh Hader stranded two inherited runners and recorded three outs to pick up his 34th save in 40 tries, breaking a franchise record for left-handers previously set by Dan Plesac in 1989.

Counsell lifted Lyles with two outs and two runners on in the fifth with Hosmer coming to bat, depriving him of seventh win since joining the Brewers.

“I know he wanted to be in there and keep going, but we had Freddy loaded for today,” Counsell said. “He’s been throwing the ball so well. You’re protecting a lead and that may be the biggest out of the game.”

Lyles, who walked consecutive batters in the inning, said he was disappointed but understood the move.

“I could have gone much deeper in that game,” Lyles said. “I stopped being on the attack like I was the first four innings. I can see why Counsell wanted to get someone else in there. But obviously I would have loved to face (Hosmer) right there.”

Brewers catcher Yasmani Grandal was out of the lineup for the first time since Aug. 18. “We thought he would benefit more by getting a good night’s sleep and having some innings off today,” Counsell said. Manny Pina started in Grandal’s place and saw his first action since sustaining a concussion on Sept. 5.

Right-hander Brandon Woodruff experienced some arm soreness after his first outing in two months on Tuesday after being sidelined with a left oblique strain. “When you get out there and let it go for 35 to 40 pitches for the first time, you’re going to be sore,” Counsell said.

Brewers right-hander Chase Anderson (6-4, 4.50) takes the mound in the opener of a three-game series against the Pirates at Miller Park on Friday. Anderson is 8-4 with a 3.58 ERA in 18 career starts vs. Pittsburgh.

People have been searching for reasons why the Brewers have gone 34-11 the last two Septembers. The common thread has been a dominant bullpen.

The Brewers' 3-1 win pulled them within two games of the first-place St. Louis in the NL Central and 1 1/2 games behind Washington for the NL’s first wild card berth.

The 5-1 victory at Miller Park is Milwaukee's 10th in 11 games, and keeps the Brewers a game behind the Chicago Cubs for the second wild card.

Christian Yelich said Monday in his first public comments since fracturing his kneecap that once he knew he wouldn't need surgery, "it was just about getting better and trying to make a full recovery."

What's the worst that can happen to the Cubs this season? Here are 10 scenarios.

For the glass-is-half-empty crowd, here are some worst-case scenarios for the Chicago Cubs.

Milwaukee moved two games ahead of the Cubs for the second NL wild card, stayed a game behind Washington for the top wild card and three back of the NL Central-leading Cardinals.

A worst-case scenario is if a Cubs-Cardinals makeup game is necessary and one of those teams also needs to play a tiebreaker, which could be against the Brewers.

Thames hit two homers, Arcia one and Milwaukee took a combined perfect game into the seventh inning in beating Pittsburgh 4-3 to catch Washington for the top NL wild card.

Lorenzo Cain is congratulated after homering against Padres starter Joey Lucchesi in the fourth inning.