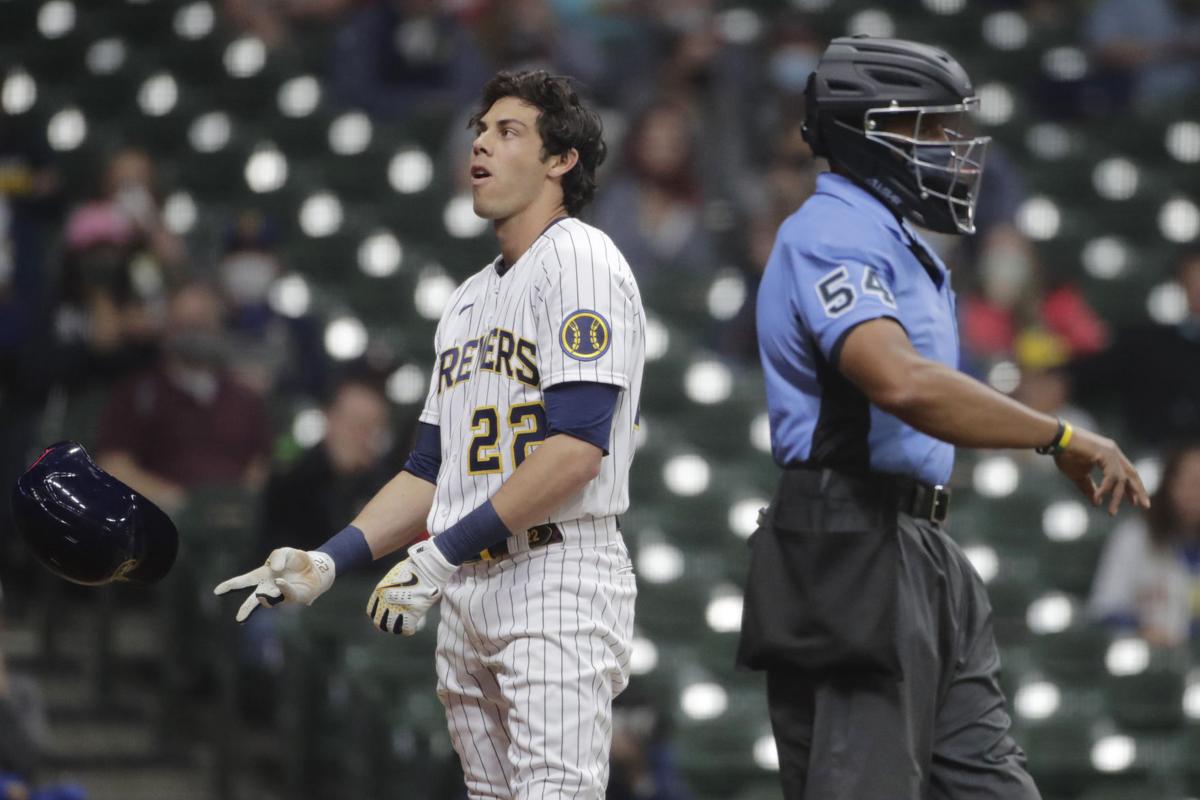 Brewers' Christian Yelich reacts after striking out during the fourth inning Saturday at American Family Field. 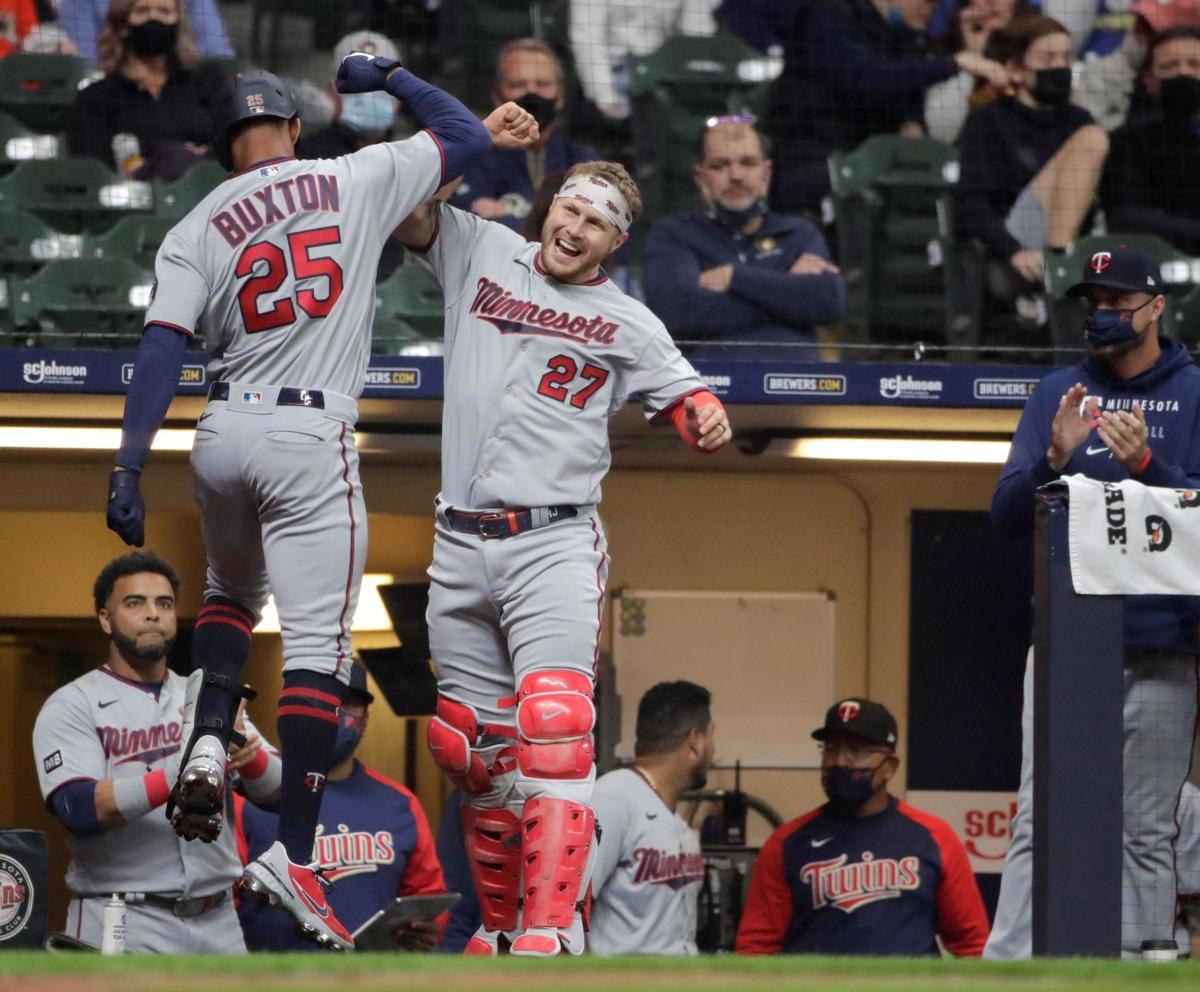 Twins' Byron Buxton is congratulated by Ryan Jeffers after hitting a solo home run during the seventh inning Saturday at American Family Field.

MILWAUKEE — José Berríos didn’t argue when Minnesota Twins manager Rocco Baldelli yanked him from a no-hitter, and for good reason.

He didn’t realize Milwaukee had no hits.

It was just about the only spot Berríos — or any pitcher — missed all night.

Berríos and three relievers combined on a one-hitter with 17 strikeouts as Minnesota beat Corbin Burnes and the Brewers 2-0 on Saturday in the season’s best pitchers’ duel so far.

Berríos (1-0) struck out 12 in six hitless innings but was pulled after Minnesota’s Byron Buxton broke a scoreless tie with a leadoff homer against Burnes (0-1) in the seventh inning — the first hit by either team. Only then did Berríos look at the scoreboard and realize he hadn’t given up any hits.

“I would have tried, but Rocco’s the manager,” Berríos said. “Whatever decision he’s going to make, I respect.”

The Twins wanted to make sure Berríos didn’t overexert himself in his first start of the season. He threw 84 pitches with 55 strikes.

Taylor Rogers struck out the side in the seventh, and Tyler Duffey retired the first batter in the eighth before walking Lorenzo Cain and giving up a single to Omar Narváez.

Duffey got out of the jam by striking out Daniel Vogelbach and getting Billy McKinney to hit an inning-ending fly to right. Alex Colomé retired the side in order in the ninth for his first save.

Berríos and Co. had to be just about perfect to outduel Burnes, who struck out 11 and didn’t walk anyone.

Neither team had a hit or walk until Buxton’s homer, which came on Burnes’ 87th and final pitch. Burnes and Berríos each hit a batter in the fifth inning.

This was the first game in which both teams were hitless through six innings since an Aug. 2, 2014, duel between Jake Peavy of the San Francisco Giants and Jacob DeGrom of the New York Mets. Both teams got hits in the seventh inning of that game, which the Mets won 4-2.

It also was the first game in MLB’s modern era in which each of the opposing starters recorded at least 10 strikeouts and allowed no more than one hit.

“It’s always awesome to go out and have a duel like that,” Burnes said.

Umpire CB Bucknor was hit by a foul ball in the neck with two outs in the ninth inning. As Bucknor was getting treated, Brewers assistant trainer Dave Yeager appeared to collapse before getting up and walking to the dugout.

“Dave’s doing good,” Brewers manager Craig Counsell said. “He’s with our medical people now, but he’s doing good. He was down on one knee, helping CB out, and when he stood up he kind of lost his equilibrium and fainted. He walked off under his own power and he’s feeling better now. It was very scary, but I think he’s going to be OK.”

Brewers: 2B Kolten Wong was back in the leadoff spot after getting hit in the right hand with a pitch in the ninth inning of Thursday's opener.

Twins: 3B Josh Donaldson went on the 10-day injured list with what the team described as a strained right hamstring. Donaldson hurt himself running out a first-inning double Thursday and was removed from the game in the bottom half of the inning.

Donaldson played just 28 games last year due to a calf injury. Donaldson and Baldelli were optimistic this injury isn't as serious.

The Brewers and Twins conclude their three-game series Sunday with a matchup of right-handers. Minnesota starts Michael Pineda (2-0, 3.38 ERA in 2020) while Milwaukee counters with Adrian Houser (1-6, 5.30).

Milwaukee ties it with three runs in the ninth inning and wins it in the 10th 6-5.

With the exception of Christian Yelich in left field, Kolten Wong at second and Keston Hiura at first base more often than not, the remainder of the lineup will be determined on a day-by-day basis.

As the Brewers set out to earn their franchise-record fourth consecutive playoff berth when the season gets underway Thursday afternoon, offense won’t be the team’s primary strength.

The Milwaukee Brewers announced the team received the COVID-19 vaccine over the weekend but wouldn’t disclose what percentage of players and staffers participated.

Brewers' Christian Yelich reacts after striking out during the fourth inning Saturday at American Family Field.

Twins' Byron Buxton is congratulated by Ryan Jeffers after hitting a solo home run during the seventh inning Saturday at American Family Field.