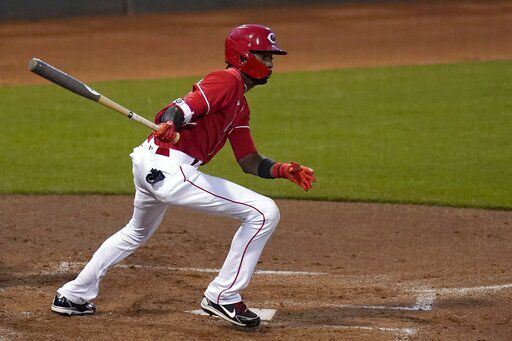 Dee Strange-Gordon watches his RBI double to right during the second inning of a spring training game for the Cincinnati Reds against the Texas Rangers on Wednesday, March 24, 2021, in Goodyear, Arizona.

MILWAUKEE — Former All-Star Dee Strange-Gordon has signed a minor league contract with the Milwaukee Brewers and been assigned to the alternate training site in Appleton.

Strange-Gordon, who turns 33 on Thursday, had gone to spring training with the Cincinnati Reds with a minor league contract and was released on March 26 after hitting .281 with no homers and four RBIs in 32 at-bats over 10 games.

He had been working out at shortstop with the Reds. Strange-Gordon has primarily played second base and also has experience in the outfield.

The Brewers wanted to address some depth concerns in the infield after trading Orlando Arcia to the Atlanta Braves this month and losing Tim Lopes and Mark Mathias to injuries in spring training. Lopes and Mathias are both on the 60-day injured list.

"This is a signing that's just about depth, I think," Brewers manager Craig Counsell said Wednesday. "And I think about the trade of Orlando, really. He's another infielder. He's an infielder with big league experience. We'll get him ready and he'll be a guy available to us if the need arises."

Starting second baseman Kolten Wong is on the 10-day injured list, though he's expected to be activated later this week

Strange-Gordon batted .200 with no homers, three RBIs and three steals in 33 games for the Seattle Mariners last season. He led the NL in batting average, hits and stolen bases in 2015 with the Miami Marlins. He also led the NL in steals in 2014 and 2017.

Dee Strange-Gordon watches his RBI double to right during the second inning of a spring training game for the Cincinnati Reds against the Texas Rangers on Wednesday, March 24, 2021, in Goodyear, Arizona.