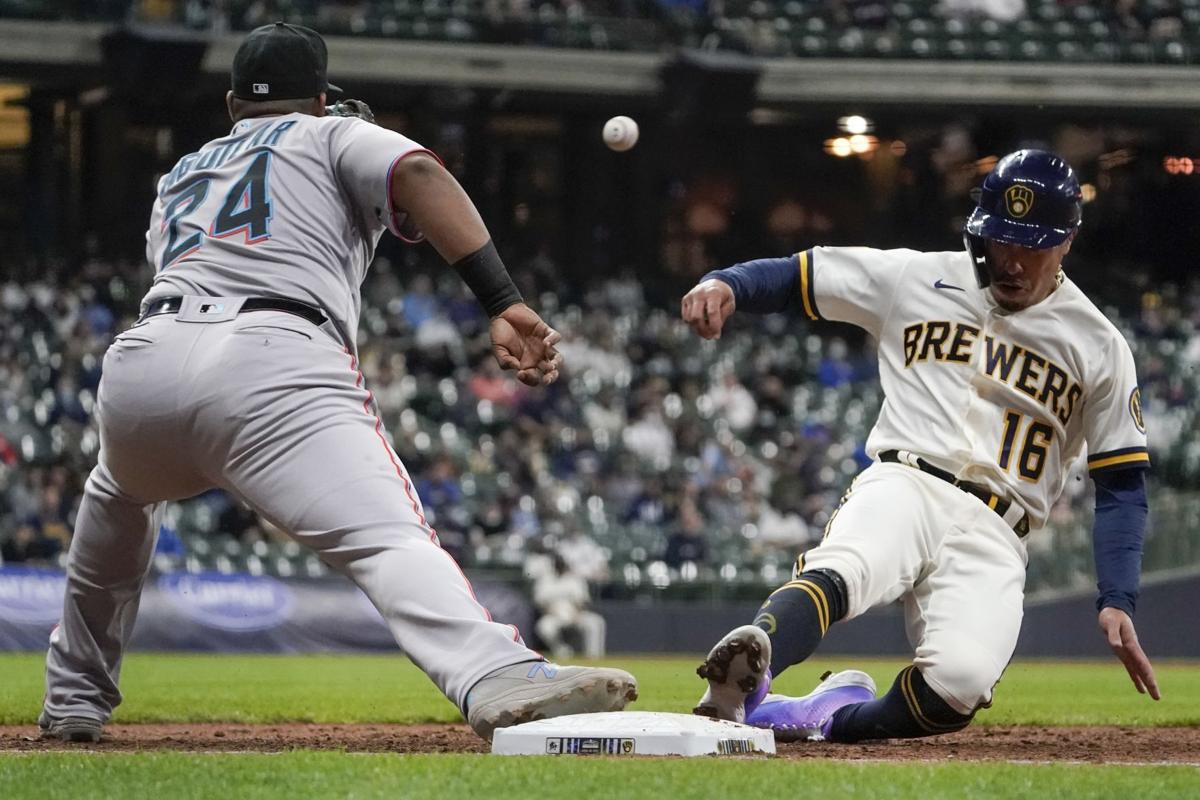 Brewers' Kolten Wong is out at first base as Marlins' Jesus Aguilar completes the double play during the third inning Monday night in Milwaukee. 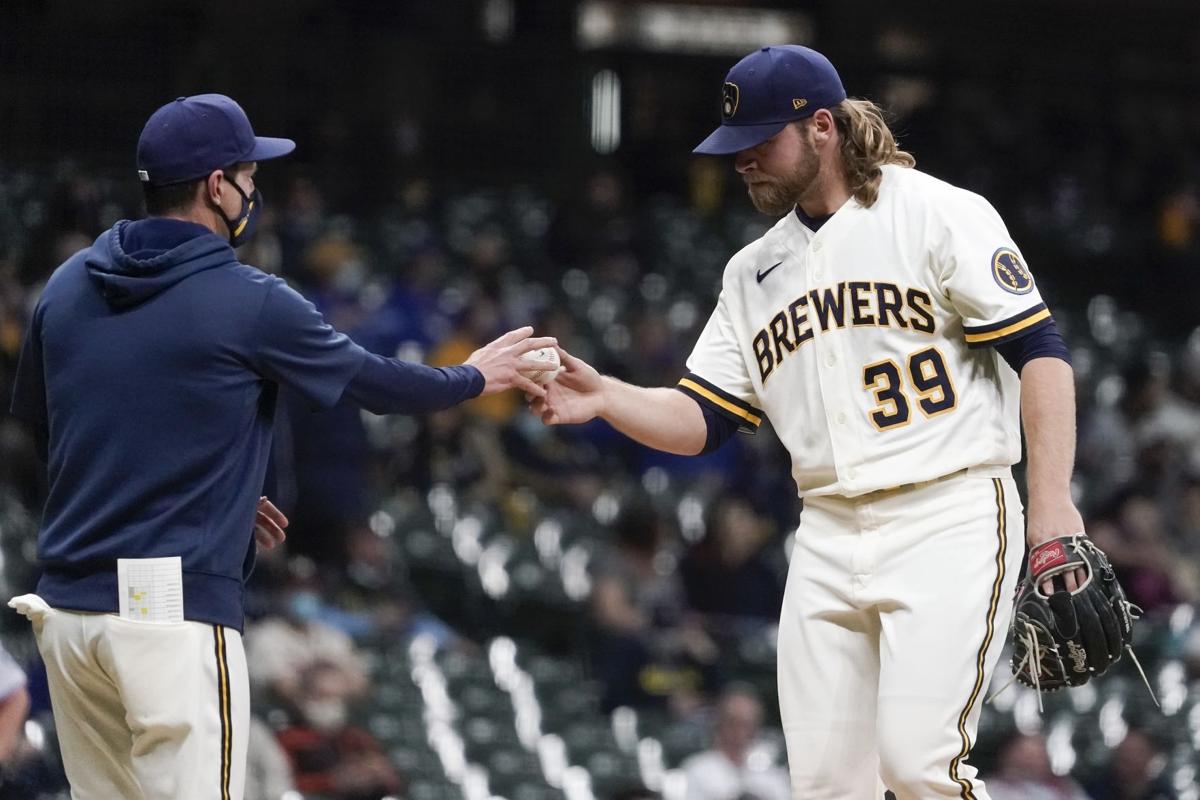 Brewers starter Corbin Burnes hands the ball to manager Craig Counsell after being lifted in the sixth inning.

Dickerson drove in three runs, two against Brewers starter Corbin Burnes (2-2), who had only allowed one earned run over four outings this season.

Since giving up that one run — a home run by Twins outfielder Byron Buxton on April 3 — Burnes had tossed 18 scoreless innings, striking out 29 without walking a batter while allowing a total of seven hits.

He struck out nine Monday, giving him 49 for the season, and still hasn’t issued a walk in 29⅓ innings. He needs three more strikeouts without a walk to break a record set in 1893.

“I’ll go back briefly tomorrow and look at the pitches on those five hits to start the sixth and see if it was a sequencing thing or they got some good pitches to hit,” Burnes said. “Then, after that, it’s back to work and get ready for the next one.”

While Burnes was having an uncharacteristically “bad” outing, at least by his own standards this season, Rogers (3-1) did his best Burnes impression by striking out seven batters without a walk.

His defense did its part, too, snuffing out potential rallies with double plays to end the first three innings. Rogers struck out the side in the fourth and worked around one-out singles in each of his final two innings.

“Those (double plays) were huge,” Rogers said. "That was kind of my game plan going in, getting groundballs to get out of it. I was very happy to get those early in the game.”

Burnes had struck out six when former teammate Jesus Aguilar reached on a one-out single in the fourth. After Garett Cooper struck out, Dickerson doubled to left field to give Miami a 1-0 lead.

It was still 1-0 when Jazz Chisholm Jr. led off the sixth with a ground-rule double down the right-field line. Chisholm scored when Miguel Rojas followed with a base hit up the middle and, after Aguilar singled, Cooper doubled to center. That put runners at second and third for Dickerson, who made it 4-0 with a single that ended Burnes’ night.

“He has elite stuff," Dickerson said. “I was just trying to stay aggressive and get a good pitch to hit.”

Drew Rasmussen got Milwaukee out of the inning without further damage.

Miami padded its lead in the eighth when Dickerson hit a solo shot for his first home run of the season and Jose Devers added a sacrifice fly.

“Once we got a little bit of a roll going, we were able to add on,” manager Don Mattingly said.

Cooper tacked on another run with a solo homer to center off Angel Perdomo in the ninth.

Wong was batting .105 (2-for-19) when he went on the injured list with an oblique strain April 9. Since returning Friday, Wong is 10-for-17 with three doubles, a home run and two RBIs.

“He’s swinging the bat well,” Brewers manager Craig Counsell said. “He’s definitely in a good place. Over the long haul, him getting on base is going to mean runs for us. We’re four games off the injured list and he’s doing a nice job."

At the conclusion of his postgame Zoom session, Rogers took a moment to note that he lost a close childhood friend a few days ago and wanted to dedicate his performance to the memory of that friend, Carlos Gonzalez, and his family.

“We played basketball, went to school (together) from elementary school all through high school,” Rogers said. “This game meant a lot to me and to his family. I know the family is going through a lot right now."

Brewers infielder Daniel Robertson was held out after taking a pitch off his helmet a day earlier in Chicago.

Robertson hadn’t been diagnosed with a concussion nor had he been placed in the concussion protocol, but Counsell said the team was watching closely to make sure symptoms don’t develop.

• Outfielders Christian Yelich (back) and Lorenzo Cain (quad) are in a holding pattern as they work their way back from the injured list.

The series continues Tuesday night with Brewers RHP Adrian Houser (1-2, 3.32 ERA) and Miami LHP Daniel Castano (0-1, 3.60) on the mound. Houser has not allowed more than three earned runs in any of his first four starts this season, while Castano threw four scoreless innings after allowing three two-out runs in the opening inning his last time out.

Brewers' Kolten Wong is out at first base as Marlins' Jesus Aguilar completes the double play during the third inning Monday night in Milwaukee.

Brewers starter Corbin Burnes hands the ball to manager Craig Counsell after being lifted in the sixth inning.