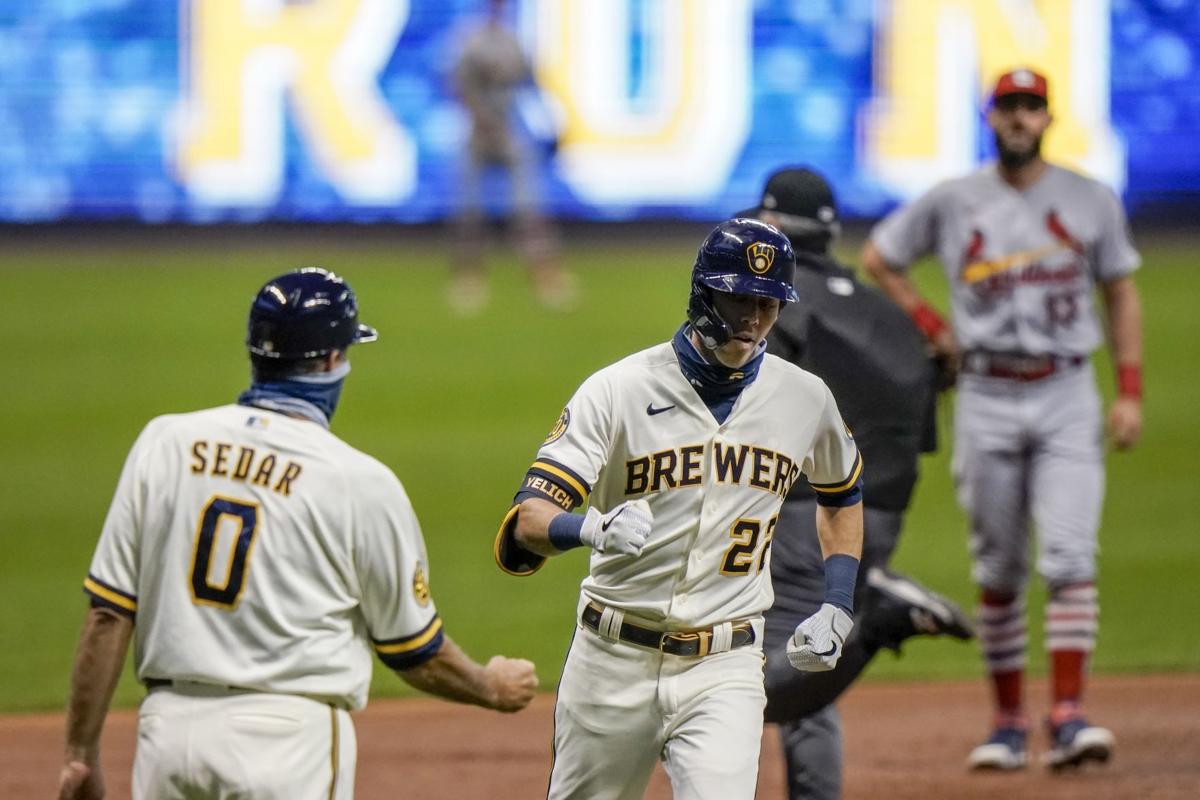 Brewers outfielder Christian Yelich is congratulated by third base coach Ed Sedar after hitting a solo home run in the first inning on Tuesday night at Miller Park in Milwaukee. Yelich was 3-for-4 with three runs scored. 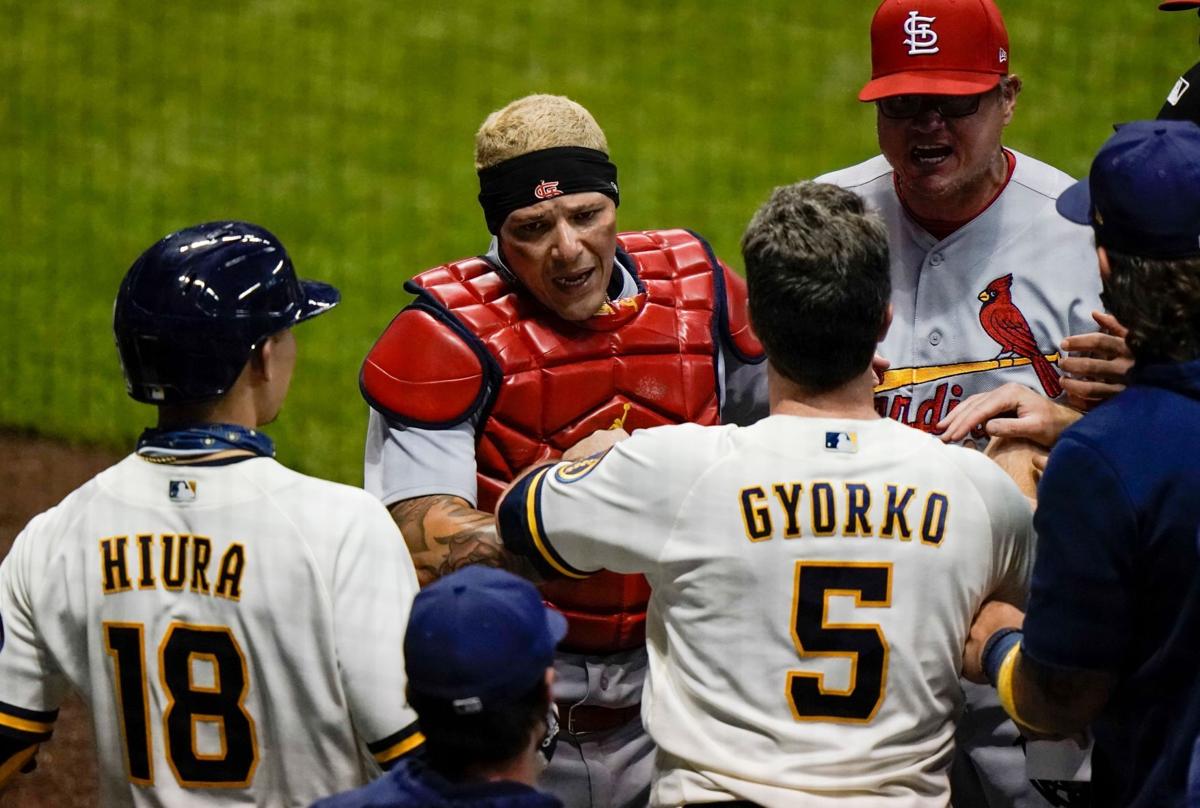 Cardinals catcher Yadier Molina has words with the Brewers' dugout in the fifth inning. Both benches cleared but no punches were thrown.

MILWAUKEE — Craig Counsell thought long and hard about giving Christian Yelich the night off Tuesday, but decided his slumping outfielder was still an offensive threat on the verge of breaking out.

Yelich rewarded his manager’s faith with a performance that all have been waiting for this season: a three-hit outing, including a first-inning home run — one of four the Brewers hit in an 18-3 rout of the St. Louis Cardinals at Miller Park.

The two-time defending National League batting champion came into the game batting .195 after going 1-for-18 over his previous five games. He’d struck out 12 times with just one walk over that span and had gone 48 plate appearances since hitting his last home run on Sept. 1.

That streak ended when Jack Flaherty hung an 0-1 curveball over the middle of the plate. Yelich sent it to right-center for his 10th home run of the season, tying the game at 1. Ryan Braun followed and worked Flaherty full before getting a fastball down the middle for his fifth of the season, giving Milwaukee a 2-1 lead.

“It’s baseball,” Yelich said. “You never know when it can turn.”

Yelich got the Brewers going again in the third, reaching on a one-out single and scoring on Daniel Vogelbach’s two-run double.

Flaherty (3-2) was charged with a career-high nine runs on eight hits and two walks. He struck out six batters, with five coming in the first two innings. He’s the first pitcher to allow nine runs to Milwaukee since the Phillies’ Vince Velasquez gave up 10 over 3⅔ innings on June 8, 2018.

Yelich picked up his third hit in the fourth inning, but was the only player not to score during a seven-run outburst that included Keston Hiura’s team-leading 12th home run. The inning also included a two-run double from Omar Narváez and an RBI single by Avisail Garcia.

The seven-run inning was one more than the Brewers scored in the five games since their 19-0 victory at Detroit last week. They scored six runs in the fifth inning Tuesday by taking advantage of four walks.

“Baseball ... it’s hard to explain a lot of things,” Yelich said. “You don’t come into a game that (Flaherty) is starting thinking you’re going to score 18. You’re expecting that game to be a battle, a close game you’re going to have to grind out for a win. It’s a funny game in a funny year but we’ll definitely take it.”

Milwaukee also scored a run when Cardinals catcher Yadier Molina was called for interference during Braun’s at-bat. Braun clipped Molina’s glove while swinging at a 3-2 offering from Rob Kaminsky.

While Molina was getting checked by St. Louis’ medical staff, tensions flared and both dugouts emptied. Cardinals manager Mike Shildt was particularly heated and was ultimately ejected, as was Counsell. Molina remained in the game.

“Apparently there was a little miscommunication between (Shildt) and our dugout, or I should say, him and me,” Counsell said. “I’m going to leave it at that.”

Vogelbach extended the lead to 18-3 with a solo home run in the seventh, his first for the Brewers.

Brewers starter Brett Anderson (2-3) went six innings and allowed two runs on five hits with a pair of walks and three strikeouts. It was his first outing since a sore hip forced him from making a start last Saturday.

“Usually, when I’ve given up a run in the first it hasn’t translated to a successful outing,” Anderson said. “Innings 2-3-4 were the best stuff I’ve had all year.”

Milwaukee’s 18 runs marked its second-highest total of the season and the most the team has scored ever against the Cardinals. Of the 12 players to make a plate appearance for, only Jace Peterson and Ben Gamel failed to get a hit. Nine players scored and drove in a run, setting a franchise record, including eight members of the starting lineup.

Milwaukee (22-25) moved within a game of the St. Louis (21-22), which holds the second playoff spot in the NL Central Division. The teams play a doubleheader Wednesday at Miller Park and meet again Sept. 24-27 in St. Louis for five games over the final four days of the regular season.

Jason Heyward and Ildemaro Vargas deliver back-to-back shots to erase 2-0 deficit and give Chicago a 4-2 win at Miller Park on Saturday night.

The lineup that produced 19 runs in the Brewers’ previous game managed only one Friday night — a ninth-inning sacrifice fly by Ryan Braun — but thanks to Brandon Woodruff it turned out to be plenty.

Avisail Garcia is hitting .237 with two home runs and 14 RBIs, far below what the Brewers expected when they signed him to a two-year deal with a third-year option.

Brewers prepare for key series against Cubs and Cardinals

In their final homestand of the season, the Brewers will play three games against the NL Central-leading Chicago Cubs and five games in three days against the second-place St. Louis Cardinals.

Milwaukee is one game back of St. Louis and Cincinnati for second place in the NL Central after splitting a doubleheader with the Cardinals on Wednesday.

With the Brewers in St. Louis looking to clinch a franchise-record third consecutive postseason appearance, here's a look at the NL playoff picture, starting with a primer on the expanded postseason format for 2020.

With two of their closest competitors in the National League playoff race idle, the Brewers opened their five-game series against the Cardinals with a 4-2 loss, dropping them two full games back on St. Louis for second place in the NL Central Division — and the guaranteed playoff berth that comes with it.

Brewers outfielder Christian Yelich is congratulated by third base coach Ed Sedar after hitting a solo home run in the first inning on Tuesday night at Miller Park in Milwaukee. Yelich was 3-for-4 with three runs scored.

Cardinals catcher Yadier Molina has words with the Brewers' dugout in the fifth inning. Both benches cleared but no punches were thrown.