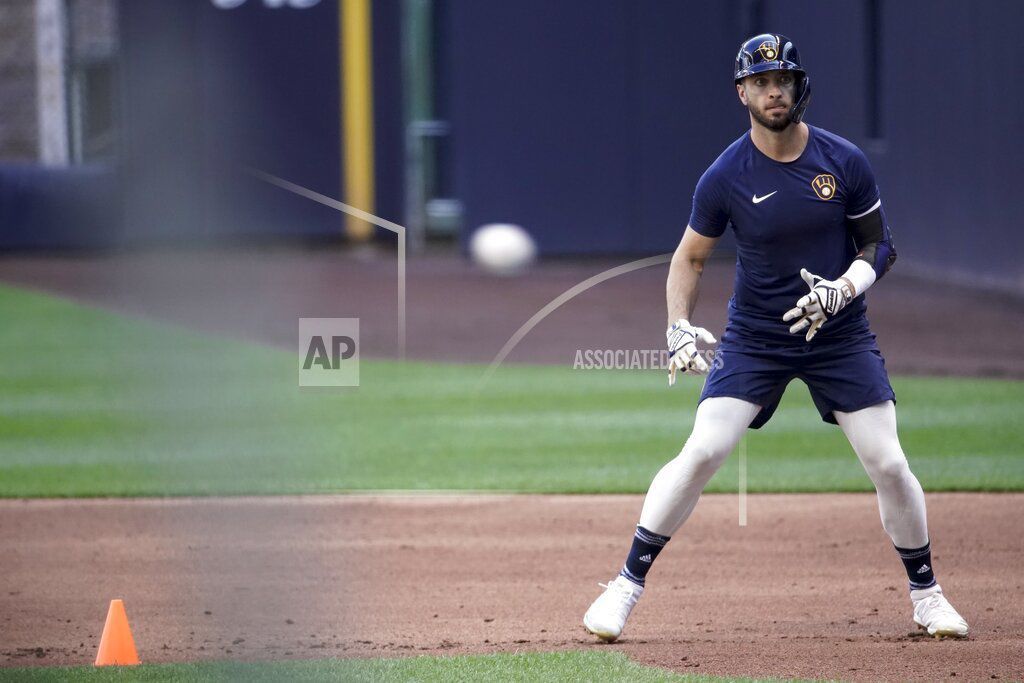 Brewers' Ryan Braun runs the bases during a practice session on Saturday, July 4, 2020 at Miller Park. 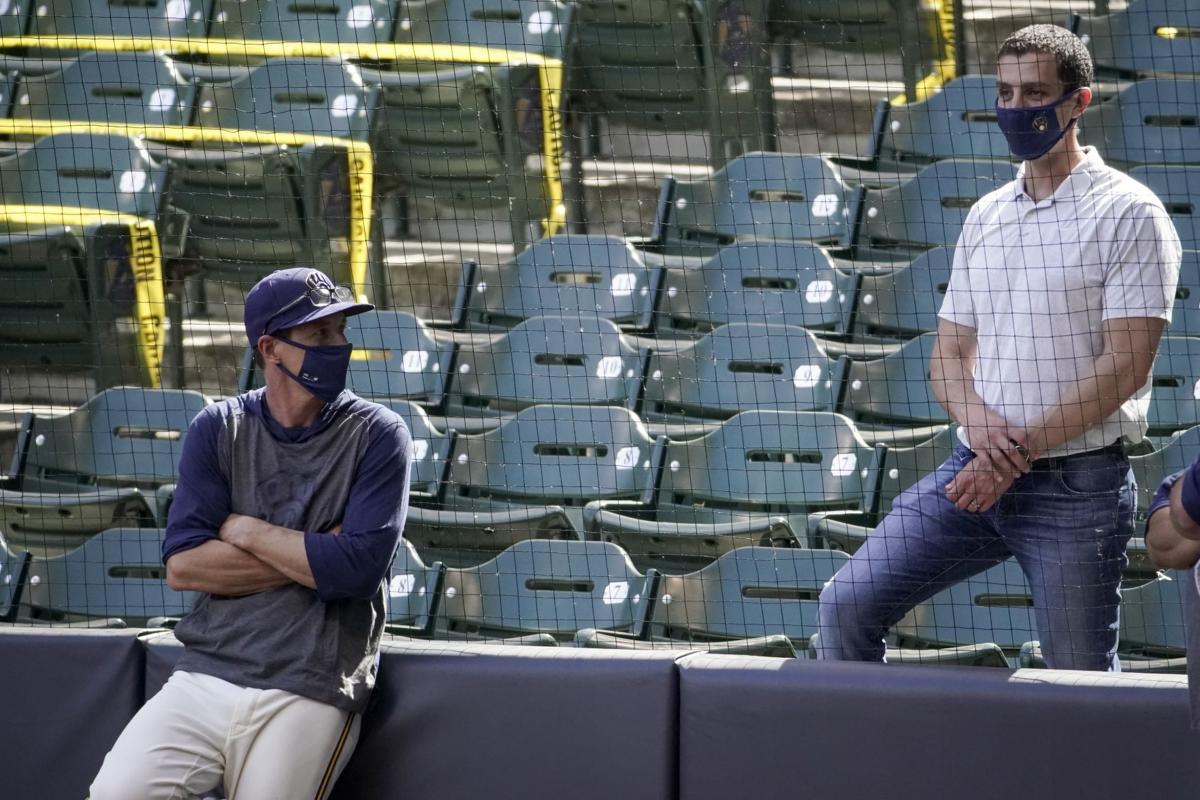 MILWAUKEE — Milwaukee Brewers veteran Ryan Braun said he’s more likely to continue playing beyond 2020 because of the unusual circumstances of this pandemic-shortened season.

Braun said in January that he was considering retiring after the season. He was more bullish on his baseball future Saturday as the Brewers held the first full-squad workout of their summer camp ahead of the 60-game season scheduled to start later this month.

“I feel like it’s more likely that I play another year than I anticipated a few months back,” Braun said.

Braun, the 2011 NL MVP, is entering the final season of a five-year, $105 million contract and will turn 37 in November. Those circumstances help explain why Braun was uncertain in January about whether he would play in 2021.

Braun knows he’ll be fresher at the end of this season than he would be after a 162-game schedule. The NL also is adopting the designated hitter this season, a move that could help Braun lengthen his career.

“Obviously at this age and where I’m at in my career, it’s very appealing to me to have the option to DH for a decent percentage of my at-bats,” Braun said.

Brewers manager Craig Counsell has said Braun will spend some time at DH but would also play right field and first base.

“We’ll have a number of people in that role,” Counsell said. “There will not be a starting DH. For our team, you’ll see Ryan there. I probably liked it for Christian Yelich just as much when I saw the rule, the ability to keep him in the lineup for more games, especially at the start here when we’re going to just have to be really careful with soft-tissue injuries for guys.”

Braun said he was skeptical that there would be a season as coronavirus cases surged in the U.S. and baseball’s labor negotiations dragged on. He also considered not playing this season, and he still hasn’t completely ruled out taking the year off.

Braun’s wife, Larisa, gave birth to the couple’s third child — a boy named Carter James — on May 31. Larisa and the kids haven’t left the family’s southern California home to join Braun in Milwaukee.

“The more I learned about the health and safety protocols that were in place, the more comfortable I felt with everything,” Braun said. “But again, I’m continuing to assess on a day-to-day basis, and Larisa and I continue to have conversations about what this looks like, whether it’s safe for me to be here, whether it would be safe for them to join me here.”

Braun believes the shorter season could boost his production.

“For me personally, playing a smaller number of games is something that’s beneficial,” Braun said. “I think I’ve been able to be pretty good the last few Septembers because when I know it’s a smaller sample size we’re working with, I can just focus on sprinting to the finish line.”

Players returning from last season’s club might not have recognized the stadium they walked into.

“You’d have to see it to believe it,” Braun said of the changes, which include dividing the 45-man roster between the home and visiting clubhouses while also using the office of clubhouse manager Tony Migliaccio for additional locker space.

Much of the team’s weight and conditioning equipment has been moved into the service corridor underneath the stadium and instead of using the clubhouse dining room, meal service is being provided on the main concourse with team meetings being held in the otherwise empty stands.

“The biggest concept we’re trying to create is that outside is better than inside,” Counsell said. “Your locker is really just a changing room. The actual clubhouse space is a closet where you change your clothes and you go on to work. The big message is to encourage guys when they’re not doing work inside to get outside.”

With just one field for baseball-related activity, the team is being divided into two groups each day, which helps with social distancing efforts and has helped players use their practice time more efficiently.

“There are some things that are going to be different about it, and I think we have to do our best to get players into new routines in the new world,” Counsell said.

Counsell said he was encouraged by the low number of positive results during baseball’s intake testing process. Just 31 players and seven staffers reporting to camps tested positive for COVID-19 — a total of 1.2% — with nobody reporting to Brewers’ camp testing positive.

“The numbers are good,” Counsell said. “And it does hopefully show that people are doing their part. I think you have to be encouraged by it and you have to compliment guys for taking positive steps thus far.”

Despite those numbers, the list of players choosing to opt out of the season grew Friday when the Dodgers’ David Price announced he was passing on playing in 2020. Angels outfielder Mike Trout said he was still considering his options.

Counsell said that from a fieldwork perspective, this camp will be fairly similar to what the team did during spring training. The length of normal spring training is intended primarily for pitchers to work themselves into shape for the regular season but with only a few weeks before play begins, and since many pitchers were throwing throughout the shutdown, pitchers began throwing batting practice right away Saturday.

And while pitchers may have enjoyed throwing to live hitters for the first time, there probably weren’t too many Brewers batters excited to step into the box for the first time in four months and see the likes of Josh Hader or Brandon Woodruff on the mound.

“It looked like both those guys were throwing 100,” Braun said. “But I think it’s a good thing for all of us to face the highest-quality pitching as soon as possible. The sooner you start to see quality live pitching, the faster you can start to find your timing and rhythm and pick up on release points and start to recognize spin and off-speed pitches and all of those types of things.”

— Andrew Wagner contributed to this report.

Thanks to the hiatus, Milwaukee's roster is expected to be at full strength when the team holds its first full-squad workout on Saturday at Miller Park.

The Brewers roster includes 23 pitchers, four catchers, 12 infielders and six outfielders while leaving 15 spots open in the 60-man player pool for president of baseball operations David Stearns to fill through signings, trades or other acquisitions along the way.

Brewers in favor of DH, other rule changes for 2020 season

With what appeared to be a logjam in the outfield, manager Craig Counsell says Milwaukee's roster is set up to excel with the designated hitter.

Brewers manager Craig Counsell will utilize a number of different spaces around the stadium, including the concourses.

Designated hitters in both leagues, a designated runner in extra innings and health standards are among the many changes for a 2020 season truncated by the COVID-19 pandemic.

Former Cy Young Award winner Félix Hernández has joined the list of major leaguers opting out of the 2020 season due to the COVID-19 coronavirus pandemic, at least temporarily ending the 34-year-old's bid to revive his career.

An emotional Tommy Hottovy shared his harrowing experience of coping with the COVID-19 coronavirus with the hope that his fellow Chicago Cubs employees and families can learn from his ordeal.

Going to the ballpark will be a whole new experience

Going to the game will be risky all by itself. Once there, the experience won't be the same.

Both players are asymptomatic and are expected to return to the team at some time during camp.

With only two weeks until the season starts, Brewers general manager David Stearns says the team is prepared for any possibility.

Brewers' right-hander Brandon Woodruff is looking to build off his strong 2019 season.

The eldest daughter of Milwaukee Brewers pitcher Josh Lindblom underwent multiple heart surgeries as an infant, causing the family to be hypervigilant against exposing her to disease.

The minute word leaked that the designated hitter was coming to the National League this season, fans and front offices alike began pinpointin…

Brewers' Ryan Braun runs the bases during a practice session on Saturday, July 4, 2020 at Miller Park. 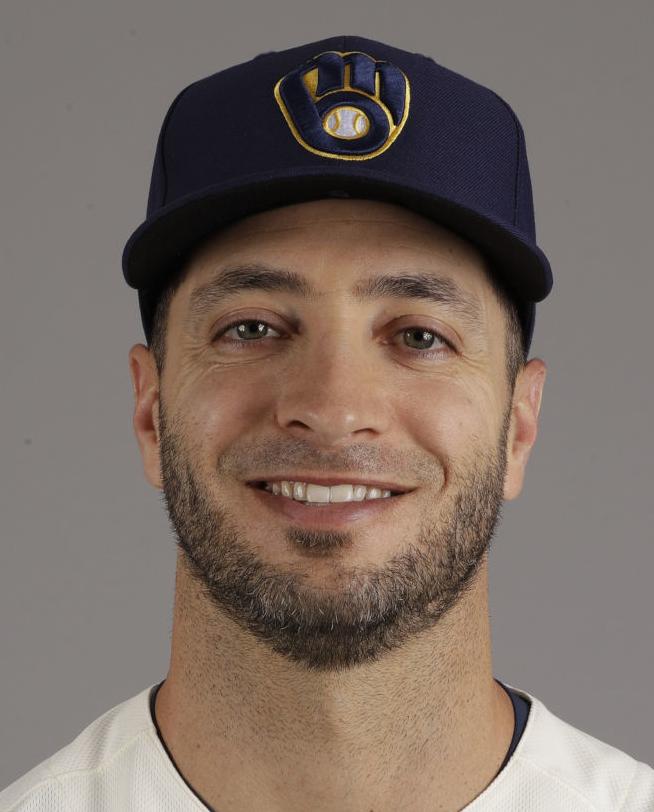