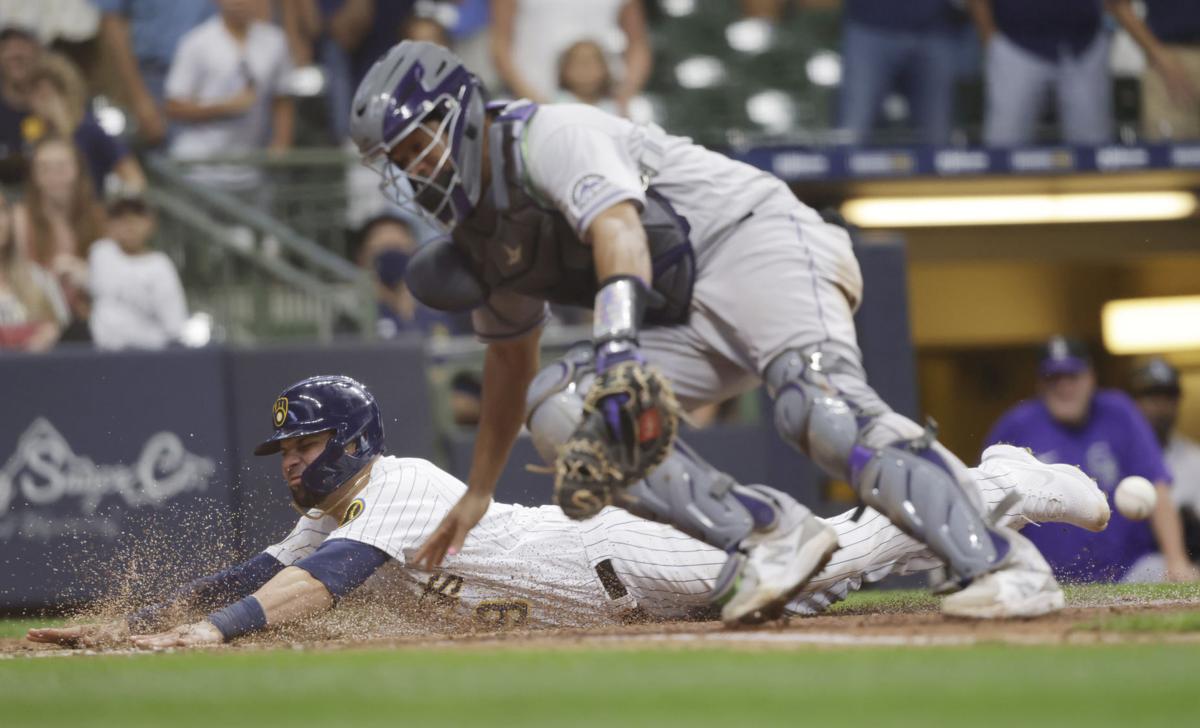 MILWAUKEE — Willy Adames hit a tying, two-run homer in the ninth inning and singled to set up Keston Hiura’s sacrifice fly in the 11th as the Milwaukee Brewers beat the Colorado Rockies 5-4 Friday to cap a return to full capacity at American Family Field.

“Willy’s had a lot of big moments already,” Brewers manager Craig Counsell said of the shortstop, acquired from Tampa Bay on May 21 with reliever Trevor Richards. “It’s been six weeks probably and I lose track of all the big moments he’s had already.”

With Manny Piña at second base to start the bottom of the 11th, Adames singled off Lucas Gilbreath (0-1) for his third hit of the game. Piña took a turn at third, but then changed his mind as right fielder Charlie Blackmon fired back to the infield.

Jackie Bradley Jr. walked to load the bases, bringing out Rockies manager Bud Black for a pitching change. Yency Almonte took over to face Hiura, who began the day batting .127.

Hiura lifted a flyball over a five-man infield that was caught by Raimel Tapia, whose one-hop throw was up the first-base line. Pina slid home headfirst to score, then ran to join his teammates mobbing Hiura.

“I thought it was great baserunning by Manny,” Counsell said. “That’s probably the fastest I’ve ever seen him run. I told him he’s discovered he’s got a new gear today.”

Hiura hit a solo homer off Colorado reliever Tyler Kinley in the seventh.

Reliever Daniel Bard failed to protect a 4-2 lead as the Brewers tied it in the bottom of the ninth. Bard walked Omar Narváez and Adames followed with a drive into the Brewers’ bullpen.

“Missed location,” Black said of the home runs. “I would assume they were pretty much down the middle and sort of belt- or thigh high.”

The Rockies took a 4-1 lead in the seventh on pinch hitter Joshua Fuentes’ two-run homer.

Kolten Wong hit a home run off Carlos Estévez in the Milwaukee eighth.

Rockies starter Jon Gray, reinstated off the injured list before the game after recovering from a right flexor strain, struck out a season-high 10 and scattered five hits over five solid innings.

“(His) fastball was hot, big, big velocity, just getting on hitters, for sure,” Counsell said of Gray’s effort. “I was glad when he left the game.”

“Jon was outstanding,” Black said. “He came out of it fine.”

Tapia’s single with one out in the sixth was Colorado’s first hit off Corbin Burnes. Tapia stole second and scored on Yonathan Daza’s hit.

Burnes allowed one run on three hits in six innings. He struck out seven and walked two.

Counsell was happy to see plenty of faces in the stands.

Counsell said that first baseman Daniel Vogelbach (strained left hamstring) is probably out for six weeks and left-hander Brett Anderson (right knee contusion) is sidelined for up to 14 days.

Brewers hang on against Diamondbacks to win 3-game series

Brandon Woodruff allowed one run on three hits in seven innings to get the win and singled home the first run during the 3-2 victory in Arizona.

Kolten Wong led off with a home run and that was plenty for Milwaukee, as Freddy Peralta and the Brewers' bullpen combined on a two-hitter.

Milwaukee finishes with a season-high 14 hits and improved to 4-2 against Colorado this season.

Eric Lauer gave up two hits in six innings and Keston Hiura knocked in three runs during the 5-0 victory.

Brandon Woodruff pitched another gem and the Brewers made the most of their two hits, hanging on to edge the Cubs 2-1 on Tuesday night.

Luis Urias homered twice as Milwaukee rallied from a 7-0 deficit to rout Chicago 15-7 for its eighth straight win.

One for the ages: Relive every Brewers double-digit winning streak after Pirates halt 11-game run

There will be no free burgers for Brewers fans this week.