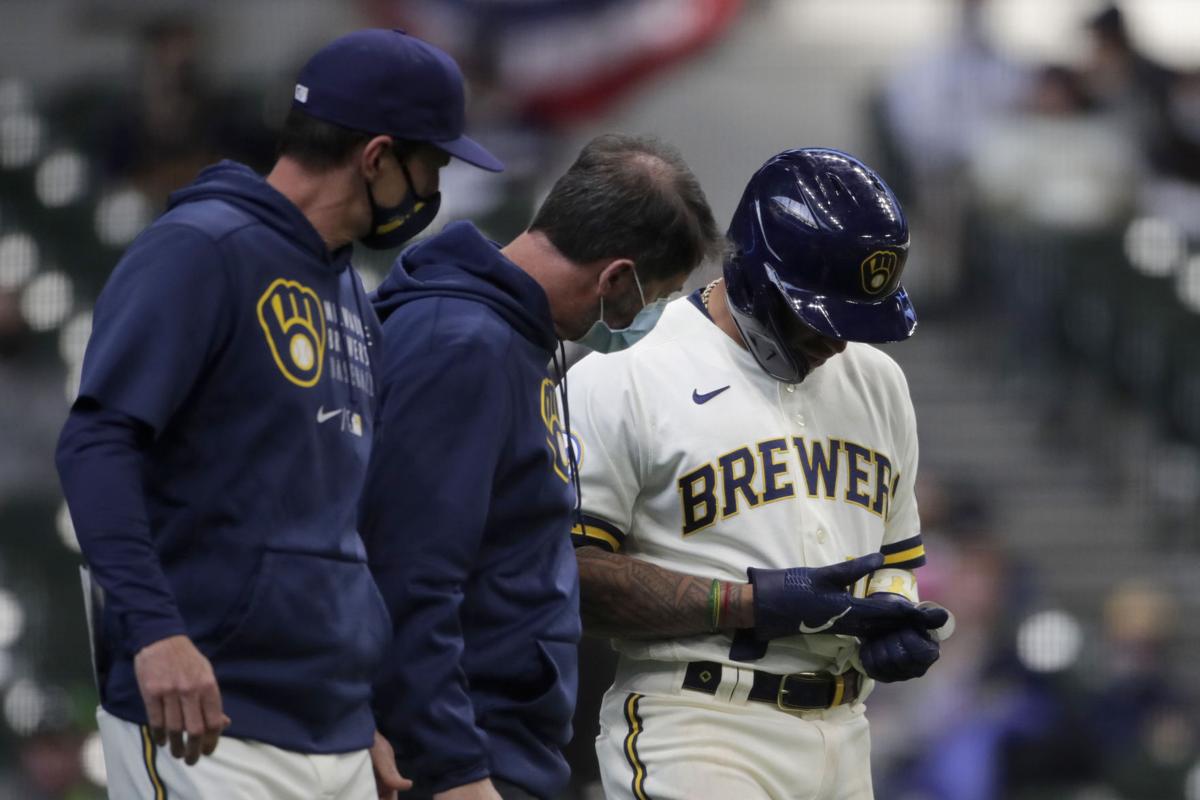 Kolten Wong's strained left oblique was mild enough that the Milwaukee Brewers could have let him rest a few days.

But with 154 games left to play, there was no point in risking a more serious injury. The second baseman was placed on the 10-day injured list prior to Saturday's game against the St. Louis Cardinals at Busch Stadium.

"We discussed not putting him on the injured list and just seeing how he responded over the next couple of days," manager Craig Counsell said. "But letting him put it behind him is the right thing to do and that's what we want to happen."

The Brewers had a number of options to consider when deciding how to best replace Wong, a two-time Gold Glove winner. The easiest solution would have been to slide Keston Hiura back over from first base, where he moved after the team signed Wong, and let Daniel Vogelbach get some regular at-bats while playing first.

Although the team likely would prefer he continue his development at first base without interruption, Counsell hasn't ruled out using Hiura at his original position.

The Brewers brought up utility man Jace Peterson from the alternate training site and he started at second base on Saturday. Daniel Robertson replaced Peterson in the sixth inning.

"Defense matters," Counsell said. "It plays into the game, it plays into us giving up runs and preventing runs, so defense goes into this. And I think it should."

"Jace isn’t going to be the every-day answer here over the next 10 days but today it fits," Counsell said. "His versatility allows us, depending what’s going on in the game, to make adjustments because he can play pretty much everywhere on the field."

Counsell is optimistic Wong's absence would be brief. The plan is to give him a few days to rest and re-evaluate him next week during the Brewers' six-game homestand against the Chicago Cubs and Pittsburgh Pirates.

"I told them I don’t want to sit back and wait for this thing to heal," Wong said. "I want to do the things I can to stay ready so I can get back out there and it’s not a transition that will take forever. I’ll be ready to go. I've had (oblique strains) before but usually on my right side. This one's a little different; it's on my left."

Travis Shaw stepped into the defensive spotlight with a handful of gems at third base.

He fielded a grounder from Nolan Arenado to start an inning-ending double-play in the third inning. With two out in the fourth, he made a nice pick and throw to retire Austin Dean. The play stranded Yadier Molina at second base and preserved a 1-0 lead.

"He had a nice day today," Counsell said. "I thought he showed some real nice range."

During his first stint with the Brewers (2017-19), most of the discussion around Shaw focused on his bat. But he's been a steady presence at third base and also during occasional action at first and second base.

"He's just such a good thrower," Counsell said. "His throws are always just on the money. He's a very accurate thrower. It's kind of an underrated part of third base, I always think."

For just the second time in franchise history, Brewers starters have gone four straight games of pitching at least five innings without allowing an earned run. ... Avisail Garcia's two-run home run in the fifth inning was the 99th of his career. ... To make room for Peterson on the 40-man roster, Milwaukee transferred right-handed pitcher Bobby Wahl from the 10-day to the 60-day injured list.

Brett Anderson (0-1, 7.20 ERA) gets the start Sunday when the Brewers wrap up their first road trip of the season against right-hander Daniel Ponce de Leon (1-0, 1.80) and the Cardinals. Anderson has had trouble against St. Louis sluggers Paul Goldschmidt and Arenado, who are a combined 16-for-33 with four home runs against him. Anderson has a 3.32 career ERA against the Cardinals.

Brad Boxberger gets the final out after Chicago loads the bases.