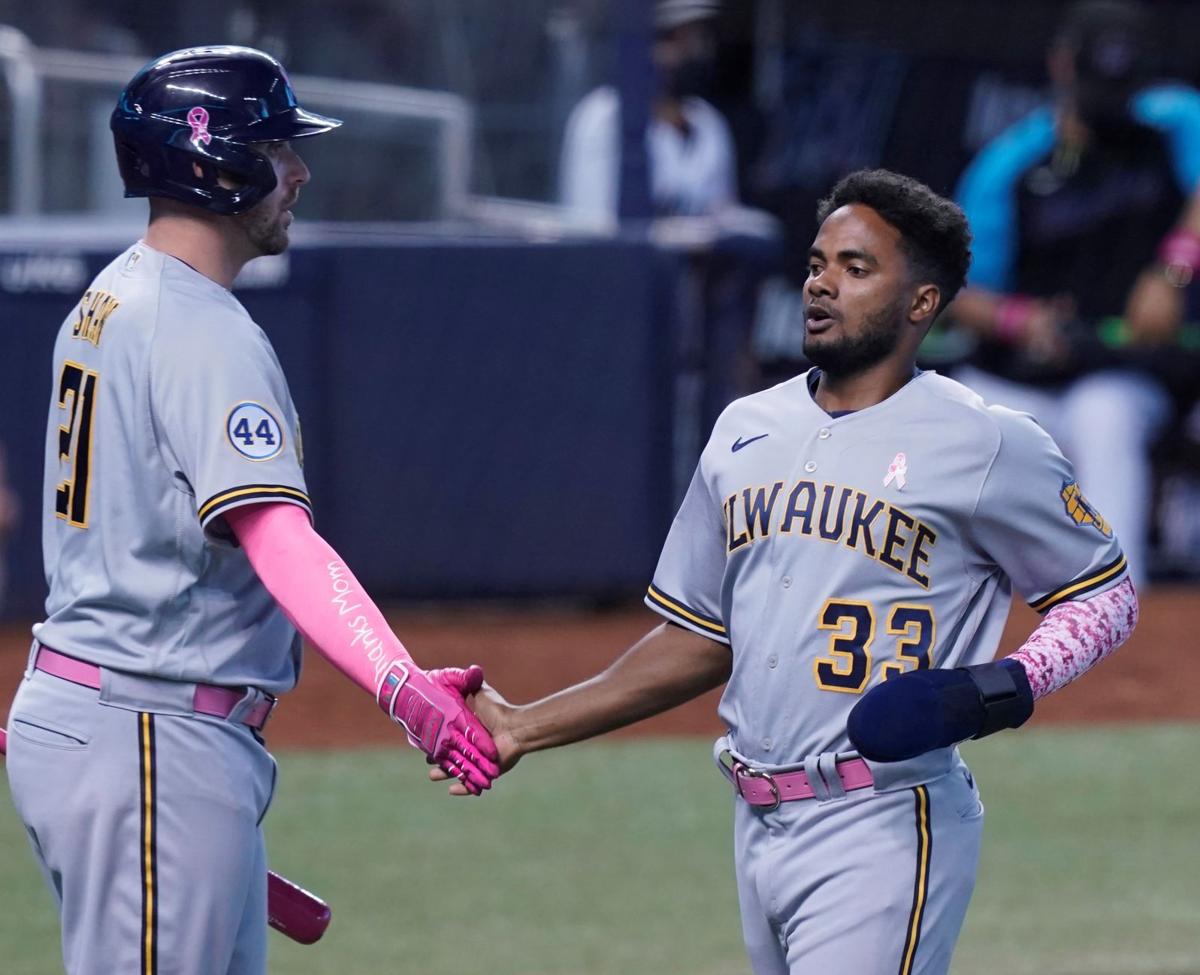 Brewers' Pablo Reyes (33) is greeted by Travis Shaw after scoring the go-ahead run in the 10th inning Sunday in Miami. 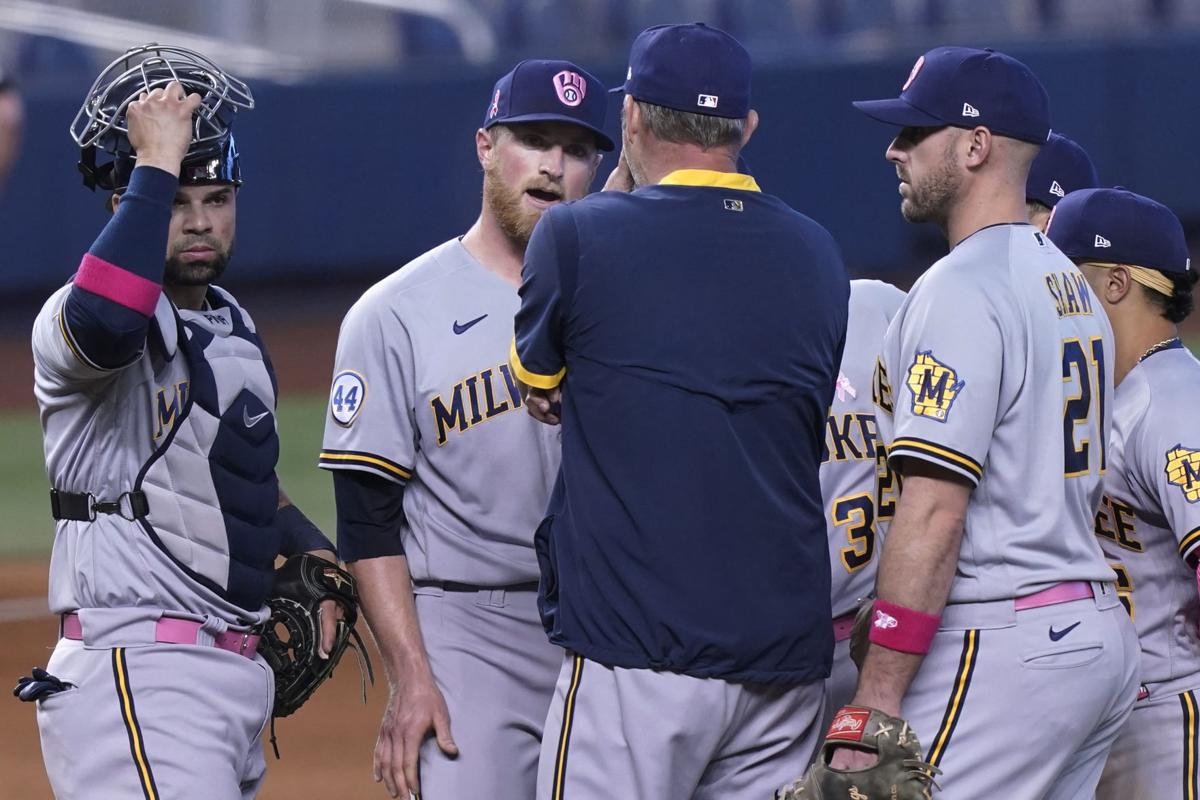 Brewers relief pitcher Drew Rasmussen talks with pitching coach Chris Hook in the 10th inning. Rasmussen stayed in the game and earned the save.

MIAMI — Tyrone Taylor hit a two-out, tiebreaking single in the 10th inning, and seven Milwaukee Brewers pitchers combined on a six-hitter to beat the Miami Marlins 2-1 on Sunday.

Anthony Bass (1-3) retired the first two batters in the 10th, but after an intentional walk, Taylor’s hit brought home automatic runner Pablo Reyes from second base.

Josh Hader (3-0) pitched a perfect ninth with two strikeouts, lowering his ERA to 0.71. Drew Rasmussen pitched the 10th and earned his first career save by working around a two-out walk and stranding automatic runner Lewis Brinson at third.

The Brewers finished 2-5 on their trip after losing the first five games.

“You’re happy with the group, and how we responded after a tough little stretch,” manager Craig Counsell said. “A lot of people doing good stuff is promising.”

“Couldn’t have asked for anything more,” Counsell said. “His stuff was crisp. I didn’t want to let him get tired really. I wanted him to do what he could and build on it.”

The Brewers have endured a wave of injuries, including in the absence of slugger Christian Yelich, who has played in only one game since April 11.

“Anybody on the team can get it done,” first baseman Daniel Vogelbach said. “Yeli hasn’t been in our lineup, and people say we’re not hitting. But we feel like somebody every night gets a big hit or makes a play. As you get deeper in the season, and everybody has been through situations with runners in scoring position, that’s just going to make us better.”

Vogelbach hit his third home run in the fourth, and Brinson’s second homer in the Miami seventh made it 1-all.

Miami’s Sandy Alcantara allowed one run in seven innings, lowering his ERA to 2.72.

The Marlins fell to 2-7 in one-run games. Manager Don Mattingly second-guessed himself for deciding against a sacrifice bunt to start the 10th. Instead, Isan Díaz struck out against Rasmussen, dropping his average to .185.

“That’s the one that you kick yourself,” Mattingly said. “You look back and say, ‘I should have done it the other way.’ I really feel like Isan at that point is going to put this guy in play, and it’s a good chance it’s going to be on the right side. Then afterward, if it doesn’t work, it’s one of those where you don’t like the result.”

The Marlins had other issues: They committed two errors, went 0-for-6 with runners in scoring position, had two runners picked off and struck out 12 times, increasing their two-game total to 30.

The Marlins their two runners picked off first base by left-handers. Anderson nabbed Corey Dickerson in the first, and Eric Lauer erased Miguel Rojas in the fifth.

“Anytime you can get those extra outs you’ll take them, especially in a one-run game,” Anderson said.

Yelich (lower back strain) has changed exercises and is playing catch but not hitting. “He was very active Saturday,” Counsell said. “It’s a matter of increasing activity and then see what happens after the activity.” ... The Brewers optioned right-hander Alec Bettinger to Class AAA Nashville. ... Milwaukee will have its first day off today since April 22. Right-hander Freddy Peralta (3-1, 3.38 ERA) is scheduled to start Tuesday in Milwaukee to begin a three-game series against the St. Louis Cardinals.

The Brewers will increase capacity at American Family Field starting Saturday, and the Bucks will do it when the NBA playoffs get underway at Fiserv Forum later this month.

For the first time in more than a year, Minor League Baseball is back.

St. Louis scores in the first and ninth innings in a 2-0 victory.

Brewers' Pablo Reyes (33) is greeted by Travis Shaw after scoring the go-ahead run in the 10th inning Sunday in Miami.

Brewers relief pitcher Drew Rasmussen talks with pitching coach Chris Hook in the 10th inning. Rasmussen stayed in the game and earned the save.