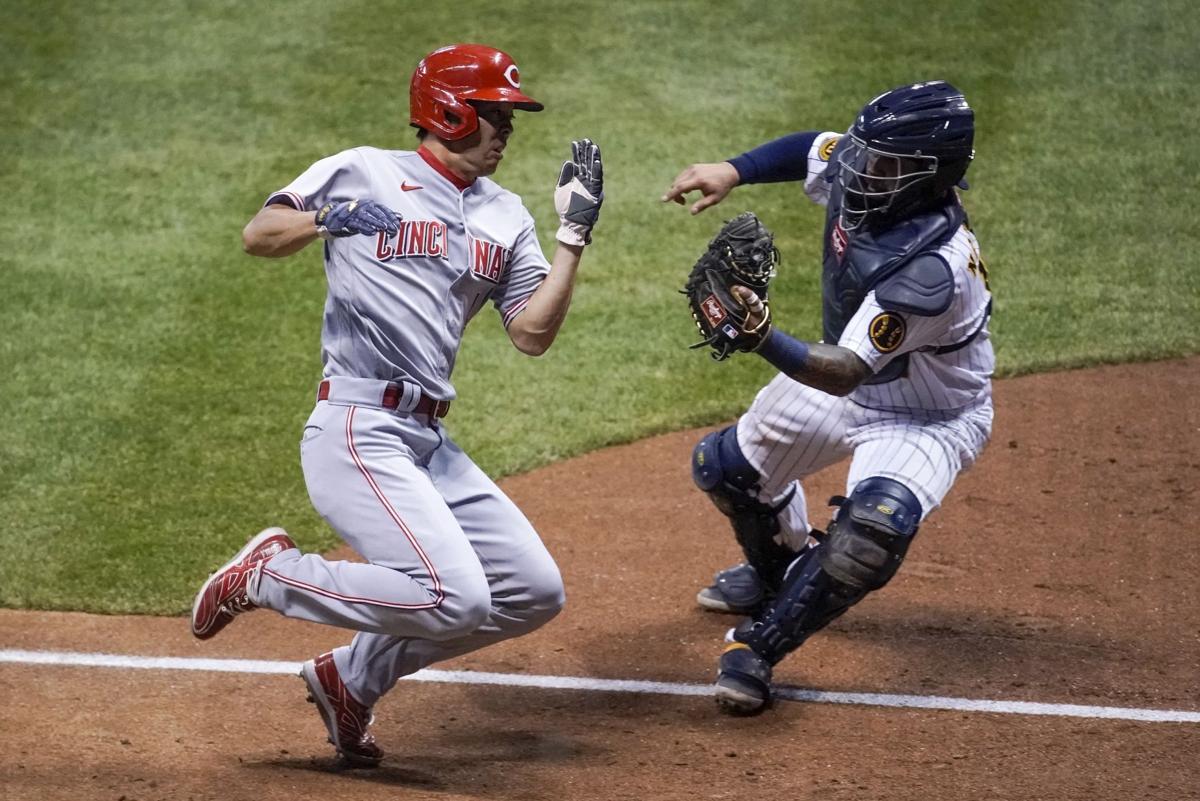 Brewers' Omar Narvaez tags out Reds' Shogo Akiyama at the plate during the seventh inning Saturday night at Miller Park. Akiyama was trying to score from third on a ball hit by Joey Votto. 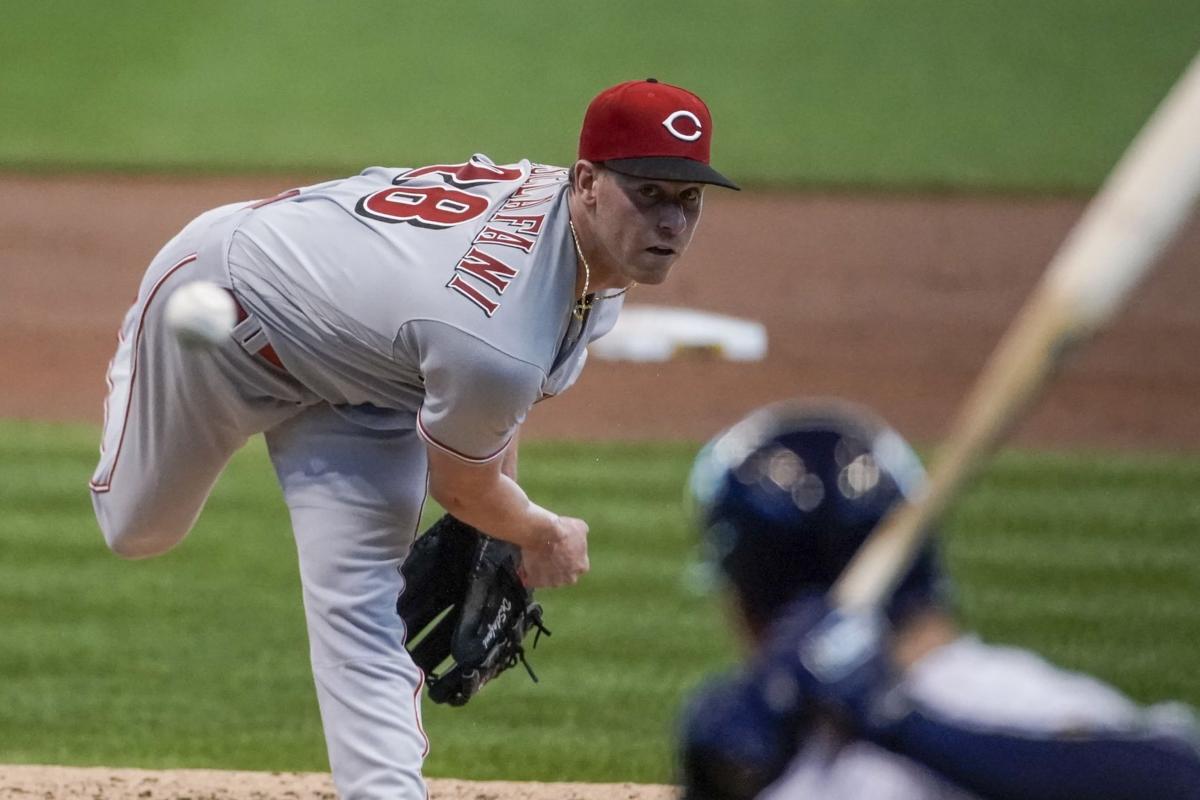 MILWAUKEE — The offensive struggles continue for the Milwaukee Brewers.

Eugenio Suarez’s three-run homer in the first inning off Brett Anderson gave Cincinnati the lead and Anthony DeSclafani (1-0) made it stand up, striking out six Milwaukee batters while allowing just two hits and a walk as the Brewers fell to the Reds 4-1 on Saturday evening at Miller Park.

“They’ve (started) two guys who are throwing the ball well this season,” Brewers manager Craig Counsell said of DeSclafani and Trevor Bauer, who started Friday in the series opener. “But there’s no question we have to do better offensively no matter who’s on the mound.”

Milwaukee mustered just four hits in the game — a double by Ben Gamel and three singles.

“We’re not going to win a lot of games with offensive performances like you’ve seen the last two nights,” Counsell said.

Despite their offensive futility, the Brewers still had a chance to win thanks to solid outings from Anderson and right-hander Corbin Burnes.

Anderson (0-1) went 3⅔ in his second start of the season while Burnes covered the final 5⅓ innings, holding the Reds to one run while striking out eight.

Anderson allowed a leadoff single to Phillip Ervin. After Nick Castellanos flew out to center, a throwing error by second baseman Keston Hiura allowed Joey Votto to reach and brought up Suarez, who hit a 1-0 fastball to left for his second home run of the season.

“I’ve just got to make a better pitch to Suarez there,” Anderson said. “Their pitching staff is obviously upper echelon in the league and runs are going to be at a premium, and to put us in a 3-0 hole is obviously not ideal.”

He recovered after Suarez’s home run and retired five straight batters before Castellanos reached on an error by Omar Narvaez to lead off the third. Votto followed with a walk, but Suarez bounced into a double play and Matt Davidson looked at strike three to end the threat.

Cincinnati threatened again in the fourth, putting two on with one out after Anderson hit Jesse Winker with a pitch and gave up a single to Freddy Galvis. He retired Kyle Farmer on a grounder back to the mound for the second out, then walked Ervin, loading the bases.

With Castellanos due up, Counsell called on Burnes and the right-hander delivered, striking out the dangerous Reds outfielder on a 97 mph fastball to end the threat.

Burnes retired seven in a row before Farmer drew a leadoff walk in the seventh. A pinch-hit double by Shogo Akiyama scored Farmer to make it a 4-0 game.

“There was a lot of good (pitching) after the first inning, for sure,” Counsell said. “I thought Brett got it going and Corbin coming in to strike out Castellanos with the bases loaded was the spot of the game.

“That was a big, tough spot to come into. He made some really good pitches on a really dangerous hitter and from then on, he was good, man.”

DeSclafani had faced two batters over the minimum when Amir Garett took over for him to start the seventh. The big left-hander notched two more strikeouts but the Brewers finally broke through in the eighth against Reds reliever Michael Lorenzen.

Ben Gamel opened the inning with a double and took third on a Narvaez single. Brock Holt’s sacrifice fly to center put the Brewers on the board but they couldn’t keep the rally going as Orlando Arcia stuck out and Eric Sogard flew out to center.

“One bad pitch cost us,” Anderson said. “Corbin came in and did a phenomenal job. Solo home runs don’t usually beat you but the three-run homers usually do, and that was the case today.”

The left-hander allows six runs in the second inning.

Primarily an infielder at every level of his career, he'll likely see time in the outfield with Milwaukee.

He moves into a starting role after center fielder Lorenzo Cain's decision to opt out this season due to the COVID-19 pandemic.

Brewers' Lorenzo Cain opts out of season amid COVID-19 outbreak

Cain's decision comes after the Brewers' home opener was delayed for a second day after multiple members of the St. Louis Cardinals, Milwaukee's scheduled opponent for the weekend series, tested positive for the virus.

Brewers' Omar Narvaez tags out Reds' Shogo Akiyama at the plate during the seventh inning Saturday night at Miller Park. Akiyama was trying to score from third on a ball hit by Joey Votto.