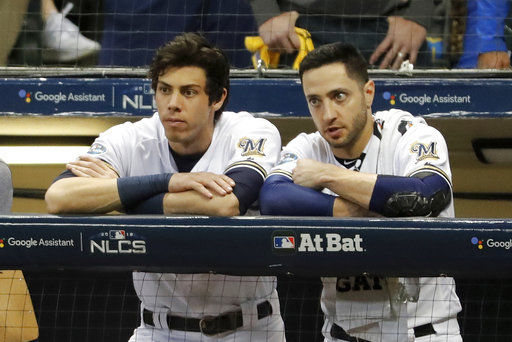 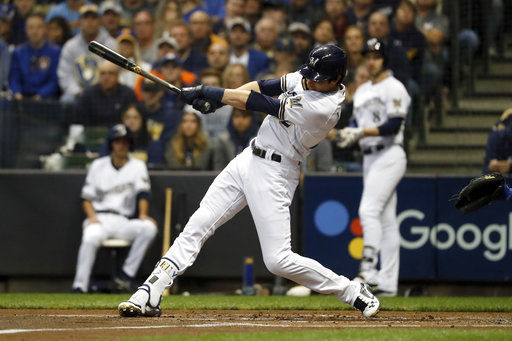 MILWAUKEE — Christian Yelich and the Milwaukee Brewers think they're just getting started.

Sure looks that way, too.

Led by breakout performances by Yelich, Josh Hader and Jesus Aguilar, Milwaukee chased down the Chicago Cubs to win the NL Central for the first time since 2011. The youthful Brewers then swept Colorado in the Division Series before taking the Los Angeles Dodgers all the way to Game 7 in the NL Championship Series.

The playoff run ended with a 5-1 loss to the more seasoned Dodgers on Saturday night, but the Brewers plan on returning to October very soon.

"We feel like we've got a lot of talent here," Yelich said. "Hopefully it's just the beginning."

The 26-year-old Yelich nearly won the Triple Crown in his first season with Milwaukee after he was acquired in a trade with Miami in January. The silky smooth outfielder is the leading candidate for his first NL MVP award.

Aguilar cruised past his previous career highs with 35 homers and 108 RBIs, and Hader set a major league record for a left-handed reliever with a whopping 143 strikeouts in 81 1/3 innings. Throw in center fielder Lorenzo Cain and key arms Jeremy Jeffress and Corey Knebel, and Milwaukee is ideally positioned to make consecutive playoff appearances for only the second time in franchise history.

"What these guys accomplished, it's something I hope every one of these guys doesn't forget," said veteran catcher Erik Kratz, who came over in a May 25 trade with the New York Yankees and made a couple of big plays in the postseason.

So don't expect manager Craig Counsell, who played for the 2011 team and grew up in Milwaukee, to take anything for granted.

"That's going to be what we spend a lot of time talking about next year, probably, is sustaining this," he said. "But we feel like that's at the forefront of all of our decisions is how do we build something that we can sustain. So hopefully that gives us a ways and a means to kind of make that happen."

Some of Milwaukee's biggest decisions heading into next season have to do with its pitching staff. Rookie right-hander Freddy Peralta showed some promise during his 14 starts, and Corbin Burnes and Brandon Woodruff became versatile options out of the bullpen after they were highly regarded starters in the minors.

The Brewers could use Peralta, Burnes and Woodruff to strengthen their rotation next year, or they could be options for Counsell if he tries more of the bullpen-oriented approach he employed so successfully in the playoffs. Jimmy Nelson, who missed the entire season after he had shoulder surgery in September 2017, also could be an option in the rotation.

It's also unclear what might happen with third baseman Mike Moustakas after he came over in a July trade with Kansas City and provided valuable leadership for the Brewers in the playoffs. The 30-year-old Moustakas was looking for a multiyear deal last winter before returning to the Royals for a $6.5 million, one-year contract that included a mutual option for 2019.

"All that stuff in the offseason, I'm not going to think about that for a while," Moustakas said after the loss in Game 7. "I'm going to soak this in, being in this clubhouse this last time this season and hanging out with these guys."

General manager David Stearns and manager Craig Counsell look back at the Milwaukee Brewers 2018 season that fell one game shy of the World Series.

Josh Hader was brilliant as usual, but Jeremy Jeffress was tagged for a crucial three-run homer by Yasiel Puig and the Brewers never recovered, losing 5-1 to the Los Angeles Dodgers in Game 7 on Saturday night.

He remains under the Brewers’ control through next season, but there’s no guarantee they tender him a contract considering what he might get in arbitration after making $8.5 million this year.

Veteran catcher Erik Kratz and the Milwaukee Brewers have agreed to a $1.2 million, one-year contract that avoided salary arbitration and includes a $300,000 guarantee.