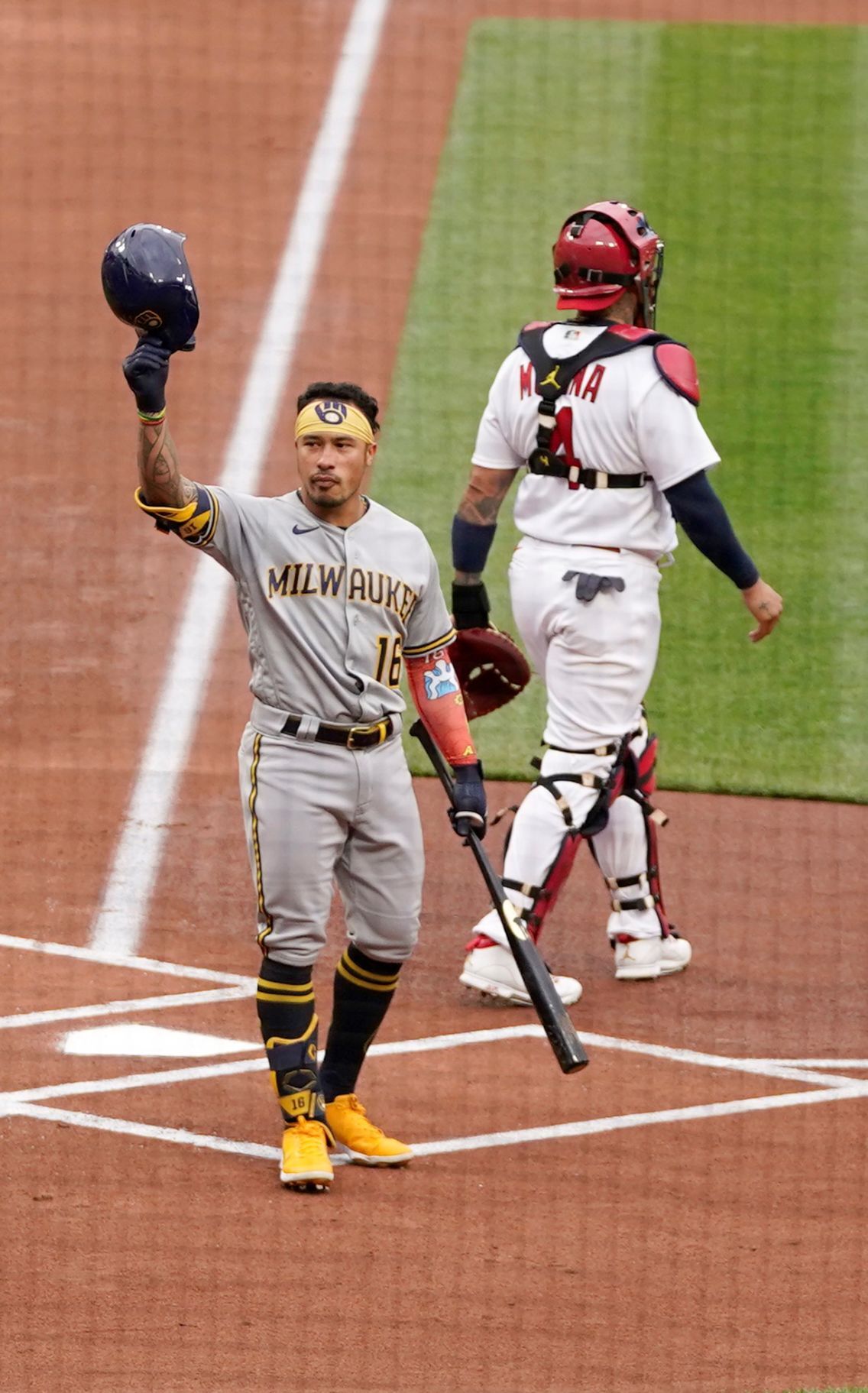 Brewers' Kolten Wong waves to the crowd as he steps up to bat during the first inning on Thursday against the Cardinals.

ST. LOUIS — Thursday began with nervousness and tears for Kolten Wong as he returned to Busch Stadium for the first time as a member of the Milwaukee Brewers.

The second baseman's day ended with similar feelings, but for entirely different reasons.

Wong was removed from the game in the seventh inning of the 3-1 loss to the St. Louis Cardinals after re-aggravating a left-oblique injury that left him out of the starting lineup a day earlier in Chicago.

"I've been dealing with this for the past three, four games just trying to hopefully work through it and play through it," Wong said. "When I took that last swing against (Adam) Wainwright's curveball (in the fourth inning), I just felt it grabbed on me big time."

He stayed in the game for three more innings but during his at-bat to lead off the seventh against Andrew Miller it was obvious something wasn't right.

"I think you could tell by the swing I took," Wong said. "It wasn't pretty. Just one of the things where I tried to go out there and compete in that last (at-bat) and stay in the game for the guys out there, but I just knew I wasn't going to really be any help at that point."

Although oblique strains almost always lead to a stint on the injured list, a decision won't be made on what to do with Wong until at least Friday, an off-day for the team. Manager Craig Counsell and Wong were both encouraged by preliminary tests that showed he still had good strength in the muscle, but the full extent of such injuries usually doesn't reveal itself until the next day.

"The injured list is a possibility but it's not a sure thing," Counsell said. "I think that's the best way to frame it. We're going to give him some time, see how he feels tomorrow and figure out what to do from there."

Losing Wong would deal a hefty blow to an offensive unit that has struggled to produce runs in the first week of the season. He's only hitting .105 after going 0-for-3 Thursday, but his ability to work pitchers for long at-bats has made him the primary leadoff option.

He's also lived up to his billing as an elite defender, making a handful of challenging plays.

"I want to be out there grinding," Wong said. "Things are tough right now. This is what really shows what kind of player you are. This is an injury that I really was not trying to have right now."

Wong's day began with a standing ovation from a Busch Stadium crowd that was saluting his eight-season run with the Cardinals, who declined to pick up his contract option for 2021. He was visibly emotional as he dug in for his first-inning at-bat against Wainwright.

Cardinals catcher Yadier Molina lingered behind home plate before getting into his crouch to give the crowd a few more minutes to show their appreciation.

"Seeing him out there made me emotional," Wong said. "Seeing (catcher) Yadi (Molina) take those steps in the grass made me emotional. Just seeing things when you play with the Cardinals — you saw them do for other guys who played here. To kind of be the guy in that box to witness that, it was pretty crazy."

Travis Shaw remains a bright spot for the disappointing offense. He went 3-for-4 Thursday, boosting his batting average to .316 with a .876 OPS that's second only to Omar Narvaez among Milwaukee's regulars.

"He squared a bunch of balls up and dumped in a hit in the first after getting jammed, which is a great thing to do," Counsell said. "He’s off to a good start."

Corbin Burnes became the first pitcher in MLB history with consecutive starts of six or more innings, one hit or fewer and no walks. ... Through seven games, Brewers starters have a combined ERA of 2.35, second in the National League and third in baseball. Milwaukee's starters also lead MLB with a 0.70 WHIP, a .143 opponents' batting average and 49 strikeouts. ... The Brewers' offense is last among the 30 teams with a .510 OPS and 10th in the NL with 20 runs scored.

Right-hander Adrian Houser (0-1, 3.60) is scheduled to make his first start against the Cardinals since 2019 when the series continues Saturday.

Houser, who allowed two runs and struck out four over five innings Sunday against the Twins, is 1-2 with a 4.64 ERA in seven career appearances against St. Louis and has a 5.71 ERA in four career starts.

Brewers' Kolten Wong waves to the crowd as he steps up to bat during the first inning on Thursday against the Cardinals.