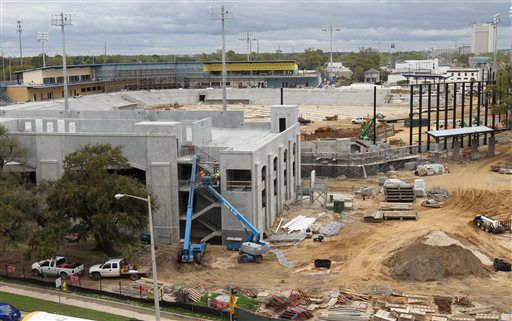 This March 23, 2015, photo, shows MGM Park under construction in Biloxi, Miss., where its now the home of the Milwaukee Brewers' Double-A affiliate Biloxi Shuckers.

“We are eager to invite these four teams and their communities to join with us in developing tomorrow’s Brewers stars,” vice president of minor league operations Tom Flanagan said. “We have a strong development history with each, and we look forward to building upon it in the years ahead.”

Nashville previously served as the team’s Class AAA affiliate from 2005-14, winning the Pacific Coast League championship in 2005. The Sounds play their home games at First Horizon Park in downtown Nashville, which opened in 2015.

Meanwhile, the Beloit Snappers received an invitation from the Miami Marlins to become their Class High-A affiliate, a step above the level where the Snappers previously operated for 39 years.

Brewers reliever Devin Williams has been voted to the 2020 All-MLB Second Team.

The first and second teams, announced Wednesday on MLB Network, were determined by a combination of voting from fans and a panel of media members, broadcasters, former players and other officials throughout the game.

The full list of both first and second teams can be found here.

The slugging first baseman was joined by Braves designated hitter Marcell Ozuna and starting pitcher Max Fried. Atlanta outfielder Ronald Acuña Jr. was chosen for the second team, giving the NL East champions more honorees than any other club following a 2020 season reduced to 60 games because of the coronavirus pandemic.

The starting pitchers were Gerrit Cole of the Yankees, Clayton Kershaw of the Dodgers, Dinelson Lamet of the Padres, Kenta Maeda of the Twins and Hyun-Jin Ryu of the Toronto Blue Jays. Cleveland closer Brad Hand and NL Rookie of the Year Devin Williams from Milwaukee were the relievers.

Betts received the most votes from fans. Trout, deGrom and LeMahieu were the only players elected to the first team each of the past two years.

This March 23, 2015, photo, shows MGM Park under construction in Biloxi, Miss., where its now the home of the Milwaukee Brewers' Double-A affiliate Biloxi Shuckers.