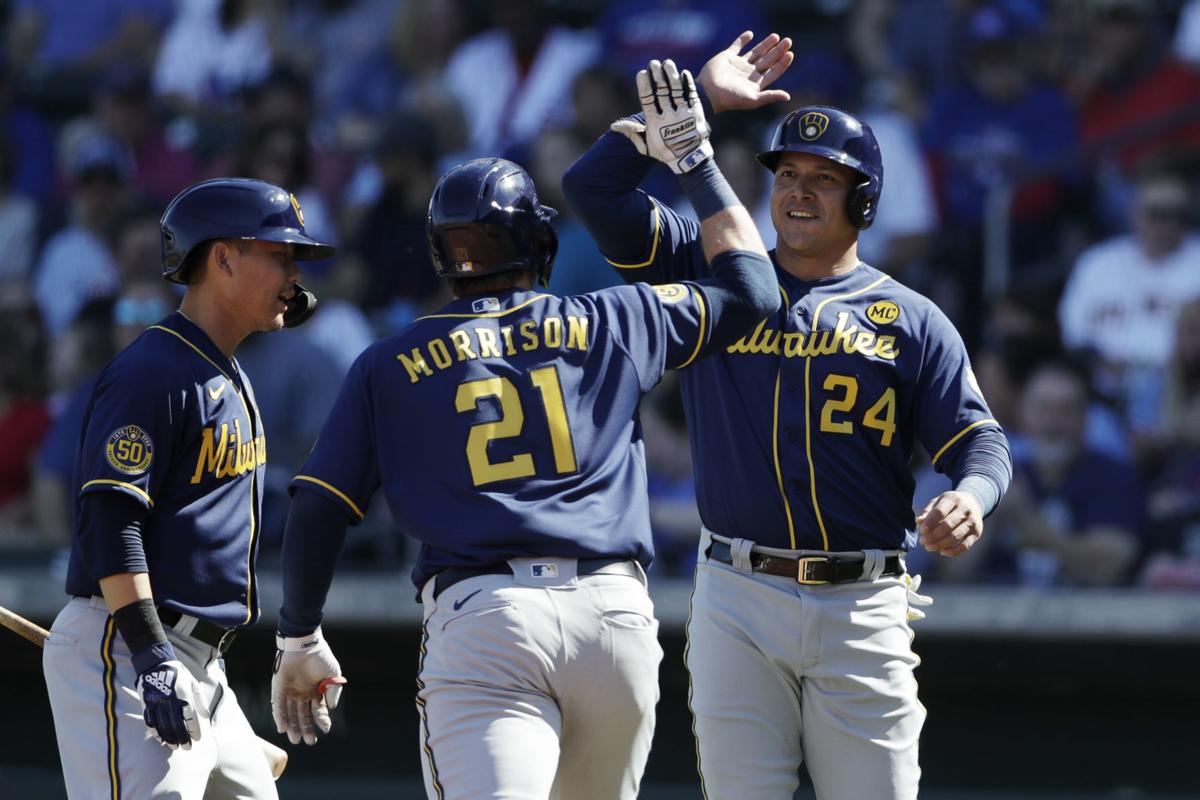 Brewers' Logan Morrison (21) is greeted by teammates Avisail Garcia (24) and Keston Hiura after hitting a three-run home run during a spring training game against the Cubs on Feb. 29 in Mesa, Ariz. Outfielder Garcia was one of the team's offseason additions, agreeing to a two-year deal worth $20 million. 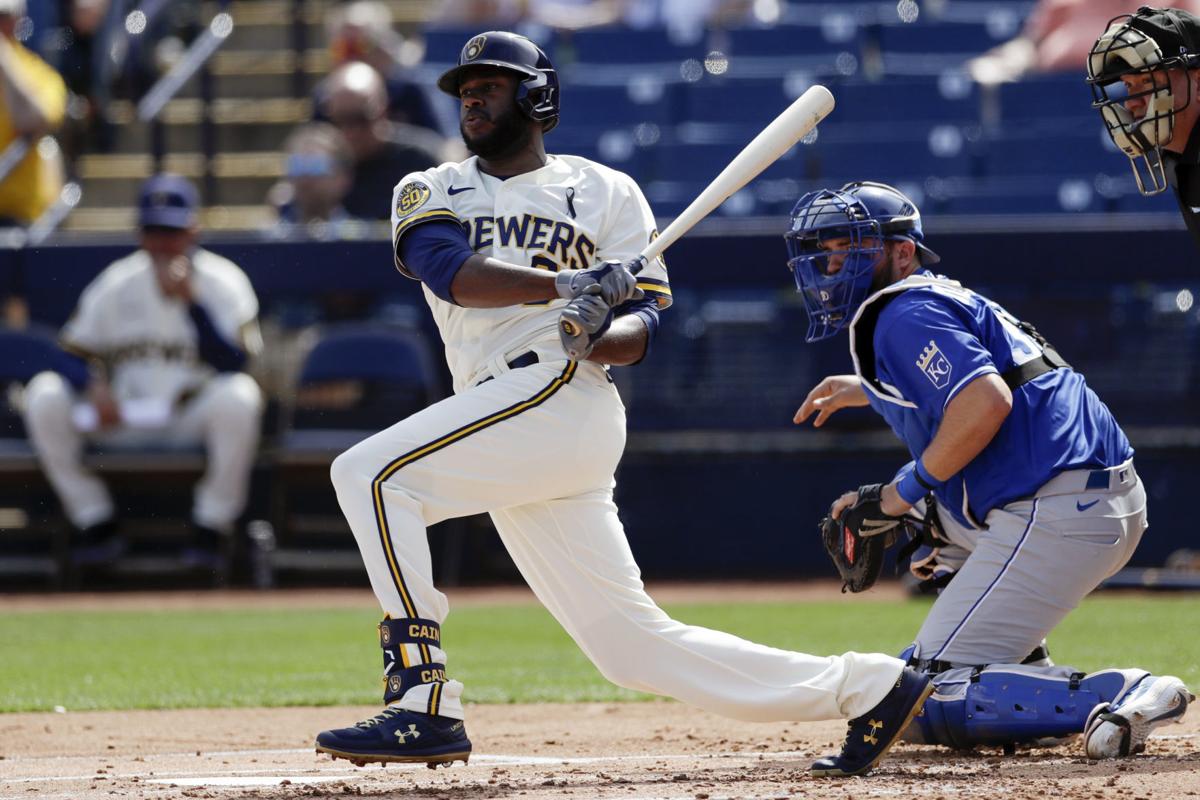 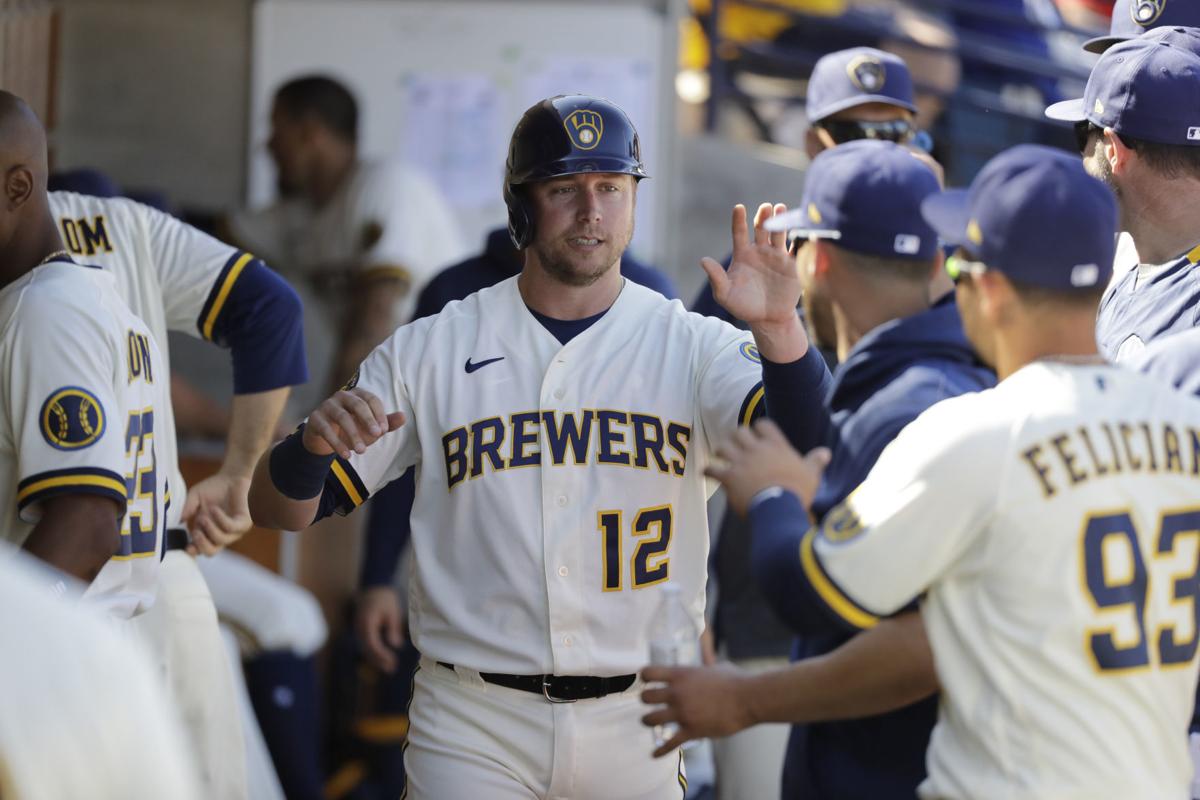 MILWAUKEE — The Milwaukee Brewers will have 45 players on hand this weekend when Spring Training 2.0 opens at Miller Park.

The roster, released Monday afternoon, includes 23 pitchers, four catchers, 12 infielders and six outfielders while leaving 15 spots open in the 60-player pool for president of baseball operations David Stearns to fill through signings, trades or other acquisitions along the way.

The list was short on surprises: Only four players from the team’s 40-man roster weren’t part of the initial group while eight players who were in camp on non-roster deals when baseball shut down in March will have the opportunity to compete for spots this time around.

“The players who will be here are players who we believe have a real chance of making our opening 30 or providing depth for us in those first few weeks of the season,” Stearns said during a video chat last week.

Teams will be allowed 30 active players to start the season, with rosters shrinking to 28 players after two weeks and 26 players after a month.

Manager Craig Counsell said last week he anticipates going into the season with a higher number of pitchers on the roster, a situation similar to the past two seasons when the Brewers used expanded September rosters to bolster their bullpen for playoff pushes.

“I think you’re going to have more pitchers at the start,” Counsell said. “I’ll tell you my mind is on a higher number of pitchers right now to protect them. If we get through camp and we feel like, ‘Man, our pitching is in really good shape in terms of their readiness,’ then we can reassess that,but at this point I’d really be strongly leaning that we’d have more pitchers than position players.”

Players who don’t make the Opening Day roster, as well as any additional players brought in along the way, will be assigned to the organization’s Alternate Training Facility at Fox Cities Stadium in Appleton and serve as a de facto farm system this season.

Stearns said last week the Brewers would likely use some of their player pool spots on younger players from the farm system, even if they have a slim chance of seeing big league action in 2020, to protect against losing an entire year of development in the absence of a minor league season.

That group also could include the Brewers’ picks in the recent MLB draft. After reaching an agreement Monday with fifth-round choice Hayden Cantrelle, the team has signed four of its five selections.

Only first-round pick Garrett Mitchell, who is represented by Scott Boras, remains unsigned.

Teams will be allowed to trade players as in year’s past, but any players acquired in a trade must be added to a team’s official player pool and at no time can that pool have more than 60 players. The trade deadline will be August 31 while the deadline to add players and have them eligible for postseason participation will be Sept. 15.

Players will report Thursday for their intake screenings. After a brief quarantine period, they will undergo their standard preseason physical examinations.

The Brewers are scheduled to hold their first full-squad workout Saturday. The regular season will begin either Thursday, July 23 or Friday, July 24 against an opponent to be announced.

Brewers in favor of DH, other rule changes for 2020 season

With what appeared to be a logjam in the outfield, manager Craig Counsell says Milwaukee's roster is set up to excel with the designated hitter.

Brewers manager Craig Counsell will utilize a number of different spaces around the stadium, including the concourses.

Designated hitters in both leagues, a designated runner in extra innings and health standards are among the many changes for a 2020 season truncated by the COVID-19 pandemic.

MLBPipeline.com graded his speed at 70, his arm at 60 and his fielding ability at 50,

Thanks to the hiatus, Milwaukee's roster is expected to be at full strength when the team holds its first full-squad workout on Saturday at Miller Park.

Braun knows he'll be fresher at the end of this season than he would be after a 162-game schedule. The NL also is adopting the DH, a move that could help lengthen his career.

Brewers' Logan Morrison (21) is greeted by teammates Avisail Garcia (24) and Keston Hiura after hitting a three-run home run during a spring training game against the Cubs on Feb. 29 in Mesa, Ariz. Outfielder Garcia was one of the team's offseason additions, agreeing to a two-year deal worth $20 million.