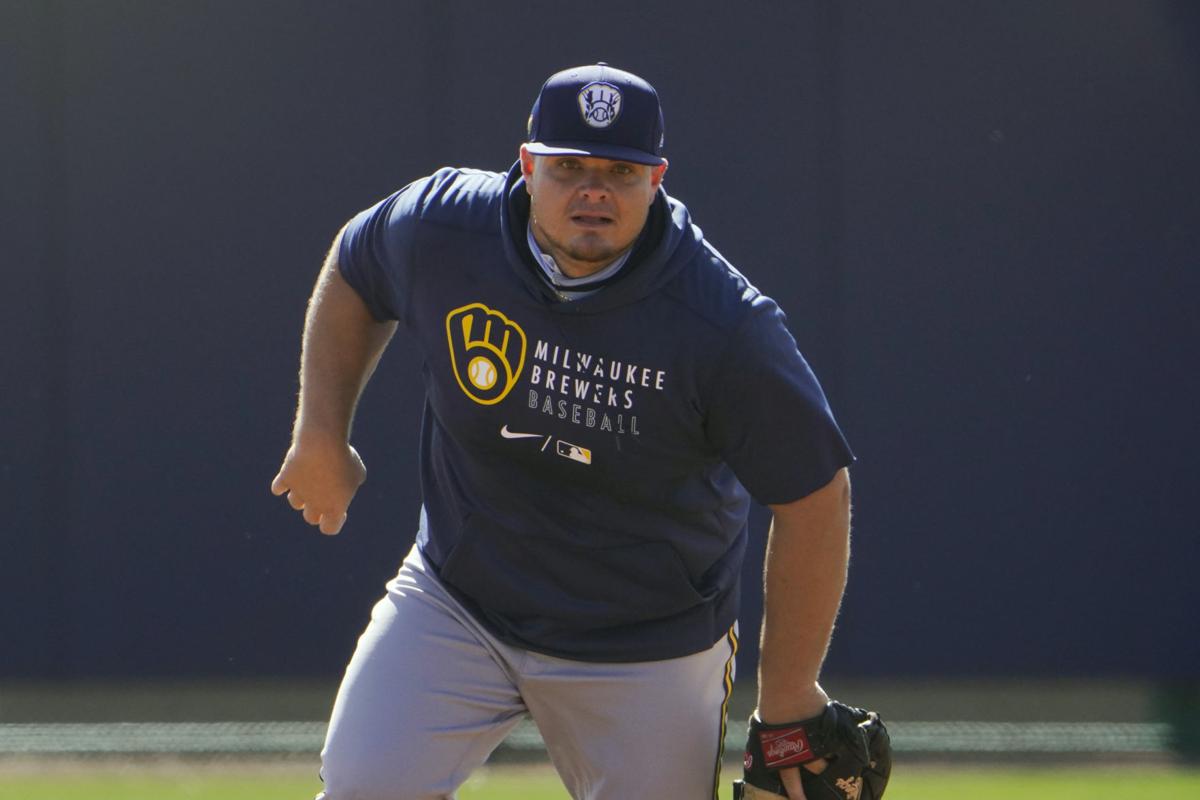 With less than a week left before the Brewers head to Milwaukee for Opening Day, manager Craig Counsell knows there are some difficult conversations ahead as the roster is finalized.

The most difficult decision might be what to do with Daniel Vogelbach, who had impressive numbers over the final two weeks of last season after Milwaukee claimed him off waivers from the Toronto Blue Jays.

The 28-year-old is out of minor league options, so the Brewers have two choices: add him to the roster or risk losing him on waivers.

Vogelbach profiles as a designated hitter but with that option not available to National League teams this season, Vogelbach would be limited to backing up Keston Hiura at first base or pinch hitting if he made the roster.

Vogelbach is acutely aware of the situation but insists he’s focused only on getting ready for the season.

“If I’m being 100% honest, I haven’t even thought of it,” Vogelbach said. “It’s just something that I can’t really control, and if I start worrying about stuff I can’t control then I lose focus on what I can control and this spring wouldn’t have been any good at all. It would have just spiraled.”

He’s performed well this spring, batting .259 with a home run, five RBIs, an .875 OPS, three strikeouts and six walks in 30 plate appearances. But after Vogelbach batted .328 with four home runs and a .987 OPS in 19 games down the stretch last season, the Brewers were already confident in his offensive abilities. What they needed to see was whether he could handle playing first base on a somewhat regular basis.

Since breaking into the big leagues with the Seattle Mariners in 2016, Vogelbach has appeared in 244 games but only 90 of those have come at first base, where he’s made 77 starts.

“In a sense, (not knowing whether or not there will be a DH) has been really good for him because he’s forced to understand that this is real and he’s going to have to play first base (if he makes the team),” Counsell said. “He’s been real diligent about his practice ... he’s done a decent job over there.”

Vogelbach has put in a significant amount of work at first base this spring.

“I definitely feel like I’m better over there than I was at the beginning of camp,” he said.

The bigger challenge, from Vogelbach’s perspective, is having to adapt to a pinch-hitting role. He is a career .194 hitter (6-for-34) with a home run and 10 RBIs in pinch-hitting situations, including 1-for-3 with two strikeouts in 2020.

“I’ve talked to a few people about it,” Vogelbach said. “The biggest thing is whether I’m hitting in the first inning or the ninth inning, just do my research on pitchers, have an approach and go up there and stick to my approach. That’s kind of how I feel about hitting in general — have a plan and stick to your plan and if they beat you, I’d rather them beat me with me going up there having a plan and they just beat me.”

Vogelbach helped his cause Monday, hitting a two-run home run off Triston McKenzie in the Brewers’ 6-3 victory over the Cleveland Indians at Goodyear Ballpark.

Tyrone Taylor and Avisail Garcia also homered for the Brewers while right-hander Brandon Woodruff (1-0) allowed two runs, including a solo home run to Franmil Reyes, on five hits and a walk with four strikeouts over six innings.

“That lineup was a really good test for me,” Woodruff said. “I started out really slow. I didn’t think I was too crisp, then I found something in the fourth inning warming up and something just kind of clicked. Everything was pretty sharp (afterward).”

At long last, baseball is back.

Outfielder Billy McKinney, who is out of minor league options, has three home runs in his past two games.

Brandon Woodruff is the first Brewers pitcher to make back-to-back Opening Day starts since Yovani Gallardo made the last of his franchise-record five in a row in 2014.

Veteran Travis Shaw's minor-league deal included a provision allowing him to opt out and seek opportunities elsewhere on March 15 if he wasn't in the team's regular-season plans.

After adding an effective slider in 2020, left-hander Josh Hader has focused on developing his changeup this spring.

Catcher Manny Pina is hitting .353 with a pair of home runs for the Brewers this spring.

Freddy Peralta is heading back to the Milwaukee Brewers’ starting rotation, bumping fellow right-hander Josh Lindblom to the bullpen to start the season.

Bill Madden: New MLB season set to begin and already half the teams are irrelevant

At a time when hope normally springs eternal for everyone in baseball, nearly half the teams can be considered irrelevant even before the season's first pitches.