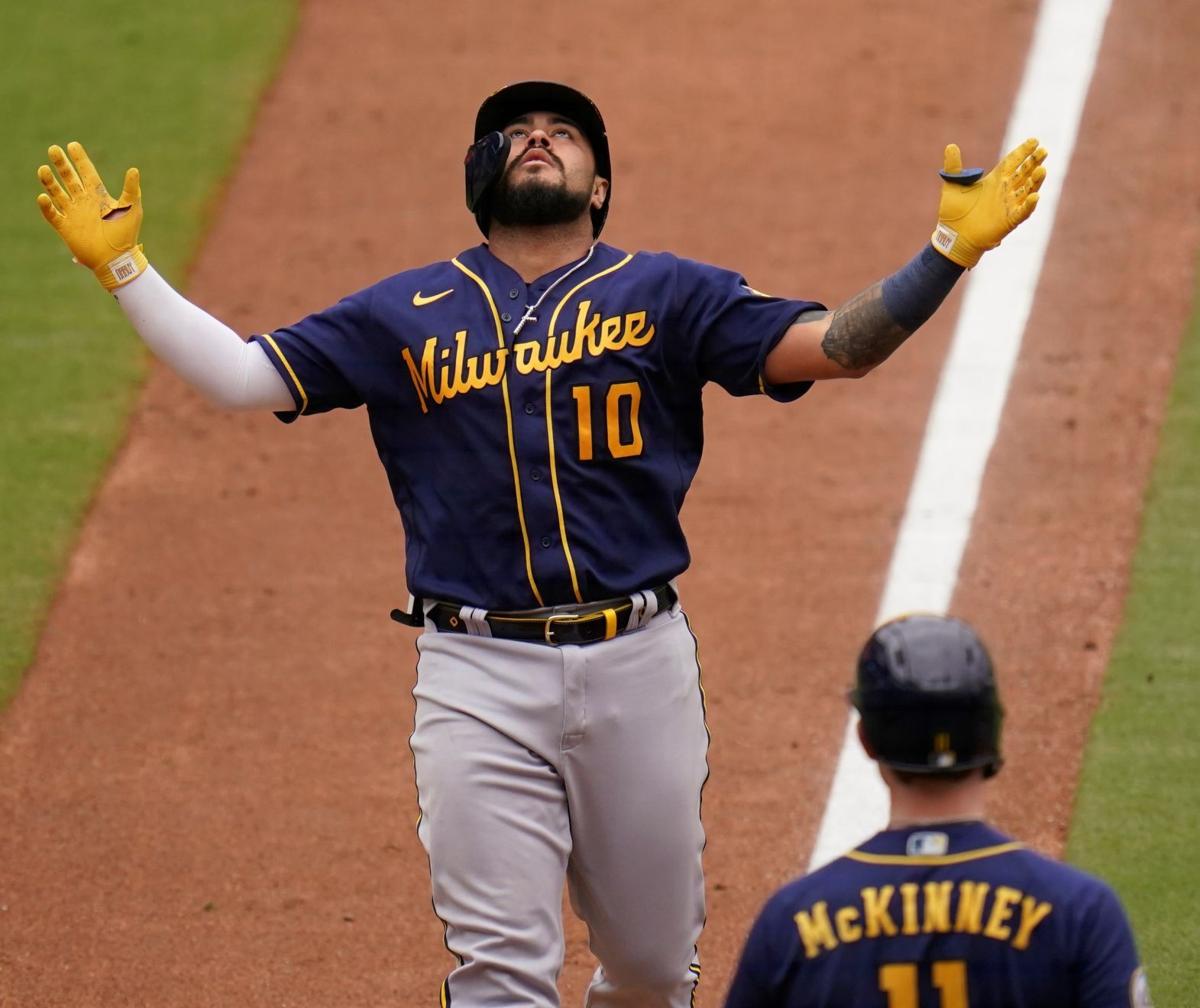 Brewers catcher Omar Narvaez looks up as he nears the plate after his two-run home run during the sixth inning Wednesday in San Diego. 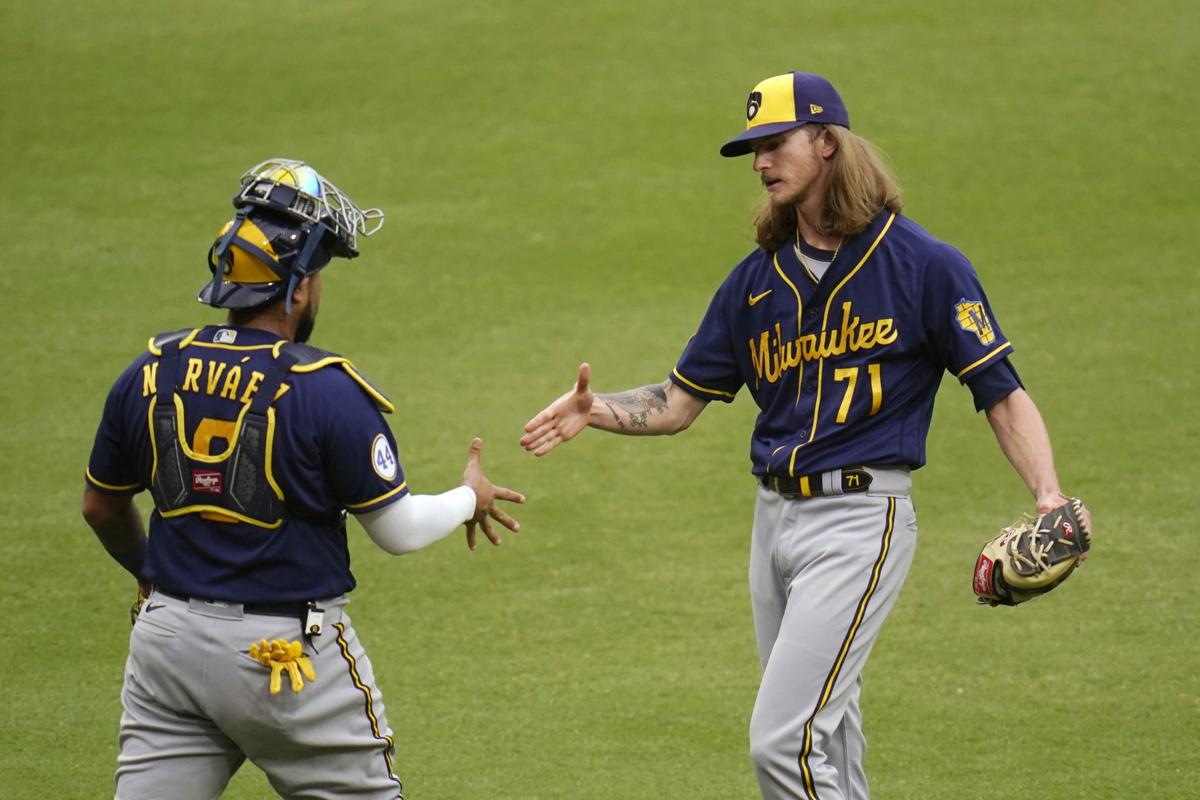 Brewers pitcher Josh Hader celebrates with catcher Omar Narvaez after closing Wednesday's win. Hader has yet to allow a run in 5⅔ innings this season.

San Diego right-hander Dinelson Lamet left his season debut after two scoreless innings due to right forearm tightness. The Padres closed out a 1-5 homestand with their seventh loss in nine games overall.

Milwaukee pitchers allowed only three runs in the series, none by the bullpen. Adrian Houser allowed both San Diego runs Wednesday in 4⅔ innings, and the bullpen shut out the Padres the rest of the way. The relievers struck out 11.

“We played a good series,’’ Brewers manager Craig Counsell said after sweeping a three-game set at Petco Park for the second time in the past three visits. “You have to play good to beat teams like this. We pitched exceptionally and we got some home runs. That was the story of the series. We played really well.”

Padres manager Jayce Tingler was ejected in the eighth after he calmly walked out to argue balls and strikes with home plate umpire Tom Hallion.

The Padres loaded the bases with no outs in the eighth but failed to score. Brad Boxberger struck out Tommy Pham before J.P. Feyereisen came on and struck out pinch hitter Wil Myers and Victor Caratini.

San Diego had runners on second and third with two outs in the ninth before Eric Hosmer struck out to end the game, giving Josh Hader a hard-earned third save.

“It was a real group effort pitching-wise today,’’ Counsell said. “The bullpen guys did a really nice job. They picked each other up.”

The Padres stranded 12 runners. They lead the NL with 162 runners stranded in 18 games.

“It’s been our Achilles’ heel,’’ Tingler said. “The guys continue to battle, but we haven’t been able to cash in. Maybe sometimes we’re trying to do too much. It’s certainly frustrating, but we’re going to continue to stay positive because we know this is going to turn in the right direction.”

Lamet appeared to be pitching well against the Brewers, striking out four after a single to start the game. He threw 19 strikes out of 29 pitches, reaching 97 mph on his fastball.

“He was feeling good, but it began tightening up on him in the second inning,’’ Tingler said. “His fastball was salty today. Through all that he’s been through, it’s really the first setback of any kind he’s had. But it’s hard to simulate the adrenaline of an actual game. We’ll have more info in a couple of days, but hopefully he can continue to pitch. It’s day to day.’’

Tingler said Lamet will get an MRI.

The 28-year-old Lamet had not pitched since leaving his final start of 2020 with elbow discomfort and missing the playoffs. He received multiple opinions that surgery wasn’t needed and underwent platelet-rich plasma therapy in the offseason.

Lamet had Tommy John surgery in 2018 and didn’t return until the second half of 2019.

Narvaez connected for his third homer in the sixth, giving Milwaukee a 3-2 lead. Peterson hit an RBI single in the fourth and a two-out drive in the sixth.

“You don’t win the championship in April,’’ Padres third baseman Manny Machado said. “We just have to keep grinding. We just need a spark. We need one thing to click.”

Veteran utilityman Dee Strange-Gordon signed a minor league contract with Milwaukee and will be assigned to the team’s alternate training site. “He gives us another infielder with experience,’’ Counsell said. “We’ll get him going and he’ll be available to us if the needs arises.” ... Brewers shortstop Luis Urias remains sidelined after injuring his right calf when he hit a home run Monday night.

The Brewers get a day off before starting a three-game series at the Chicago Cubs on Friday. Left-hander Brett Anderson (2-1, 2.65 ERA) is scheduled to start for the Brewers vs. right-hander Kyle Hendricks (0-2, 6.92).

Brewers catcher Omar Narvaez looks up as he nears the plate after his two-run home run during the sixth inning Wednesday in San Diego.

Brewers pitcher Josh Hader celebrates with catcher Omar Narvaez after closing Wednesday's win. Hader has yet to allow a run in 5⅔ innings this season.