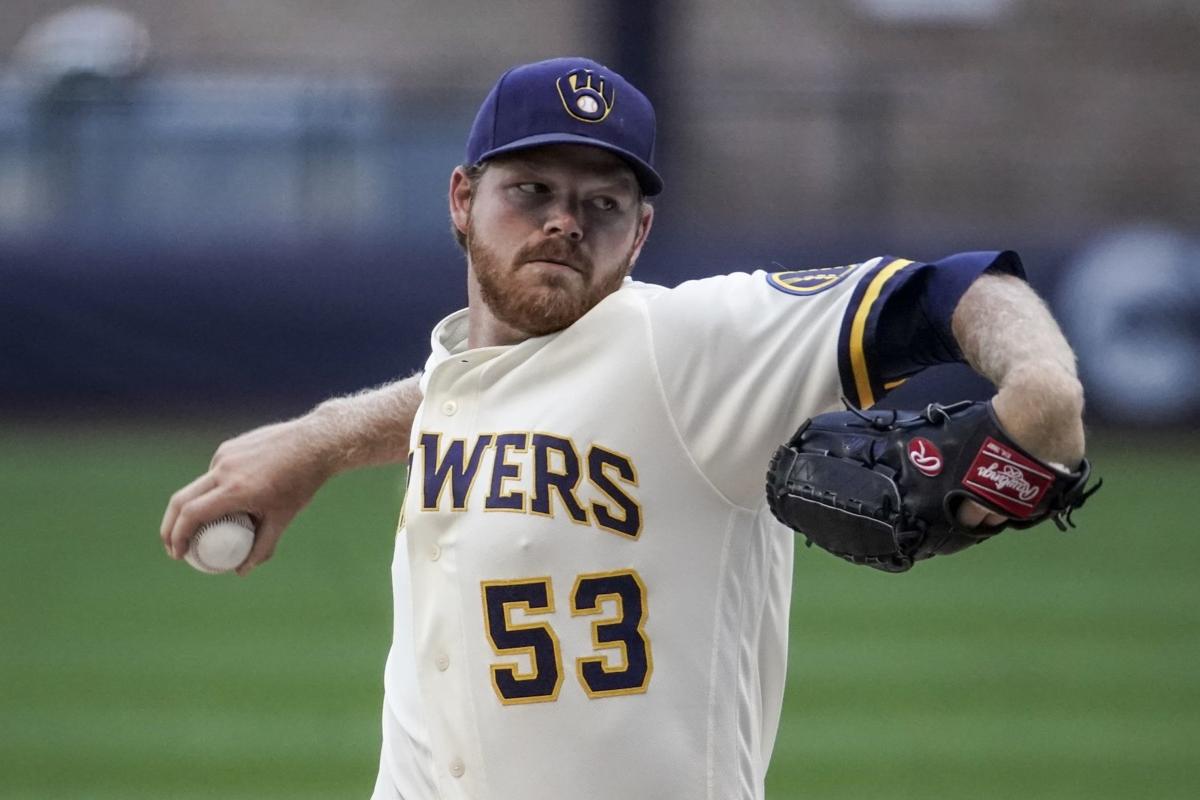 Brandon Woodruff earned his first All-Star Game invitation last season, when he went 11-3 with a 3.62 ERA. 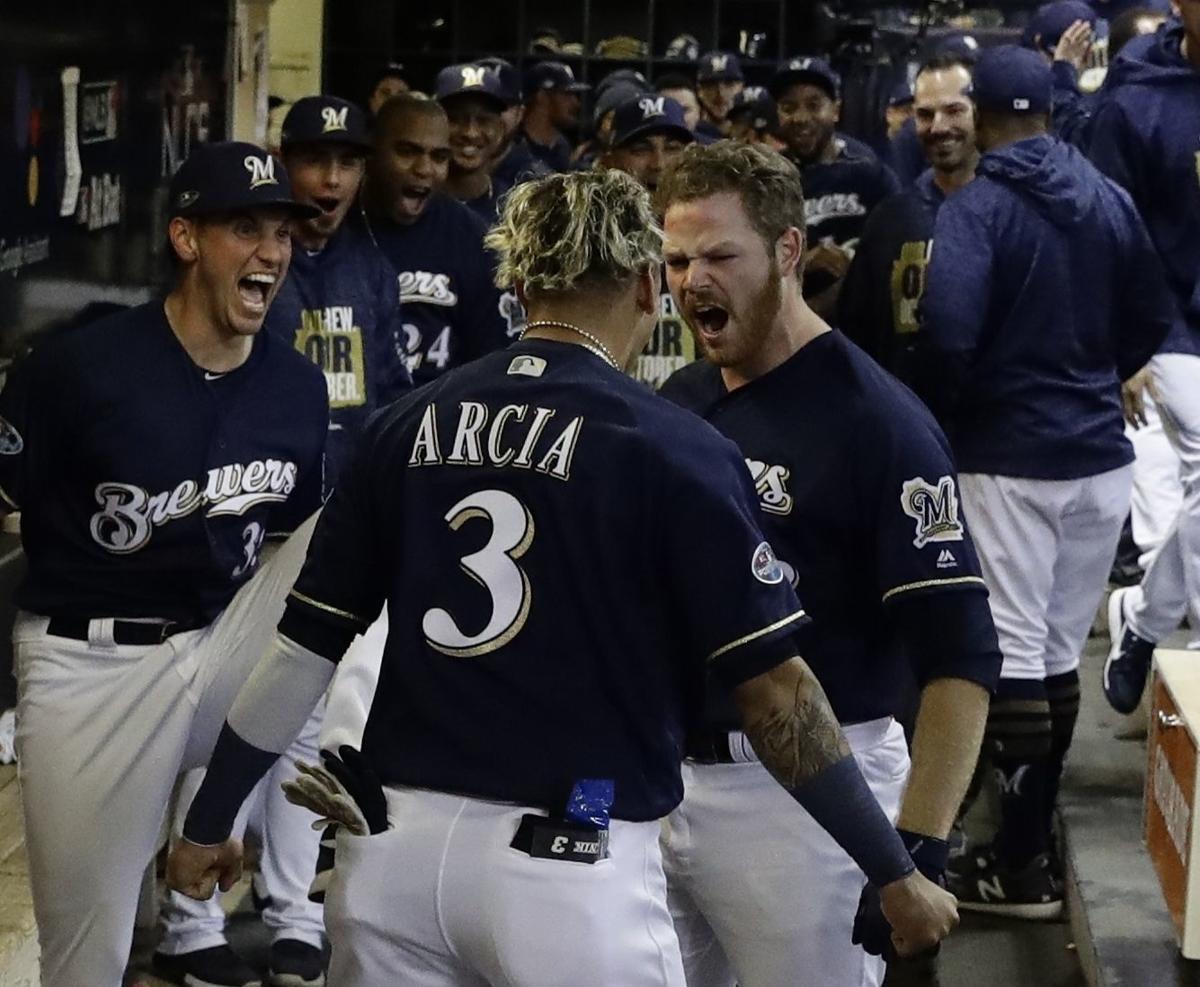 Brewers' Brandon Woodruff, right, is congratulated by Orlando Arcia after hitting a home run against the Dodgers in Game 1 of the NLCS in 2018.

MILWAUKEE — A normal spring training game could never have produced the moment that played out Thursday afternoon at Miller Park.

Four innings into a situational scrimmage, Christian Yelich stepped into the batter’s box and dug in against Brandon Woodruff — the Milwaukee Brewers’ best hitter against the team’s top starter, who has shown flashes of becoming one of the best in the National League.

And if that wasn’t enough drama, Mother Nature got into the act, too, sending a line of severe thunderstorms across the state that produced a clap of thunder so loud it caught everyone in the stadium by surprise, Woodruff included.

“I (jumped),” Woodruff said Friday during a video conference with reporters. “I looked back real quick because it sounded like it popped one of the buildings out in right field. It was pretty loud.”

From there, a terrific battle ensued. Woodruff blew a few fastballs past Yelich to open the at-bat, then turned to his secondary pitches, which Yelich fouled off — loudly — before finally getting the upper hand by striking out Yelich with a changeup.

The combination of the at-bat and the storm reminded manager Craig Counsell of the classic baseball movie “The Natural,” in which Roy Hobbs smashes a home run into the lights, setting off a fountain of sparks.

“The lightning struck in the outfield and you think of the movie,” Counsell said. “For an intrasquad game on day two of this whole thing, it was definitely the moment of the day.”

Entertaining as it was, it was also the kind of moment Woodruff hopes to use to continue his development as one of the game’s best young pitchers.

“You got to see what you (usually) see from the dugout,” Woodruff said of facing Yelich. “He does not even budge at breaking stuff. He’s such a good hitter — we’re talking about one of the best hitters on planet Earth right now, he’s not just an average Joe. Coming in after the game, I was talking to him about what he saw. He sees breaking pitches like that out of the hand pretty well, so that let me know it was something I could definitely work on.”

An 11th-round pick out of Mississippi State in the 2014 draft and the Brewers’ 2016 minor league pitcher of the year, Woodruff began establishing himself as a cornerstone of the franchise’s future in 2018, going 3-0 with a 3.61 ERA while working primarily as a multi-inning reliever.

He earned a spot in Milwaukee’s season-opening rotation in 2019 and, after a sluggish first month, earned his first All-Star Game invitation. He posted an 11-3 record with a 3.62 ERA while leading the team with 143 strikeouts and 10 quality starts despite missing nearly two months with an oblique injury.

Woodruff’s goal this season is to avoid another slow start, especially during a shortened season.

Improving his secondary pitches is one way to help that effort and that was a point of focus for Woodruff as he went into offseason mode during baseball’s COVID-19 hiatus.

In the past two seasons, 64.1% of Woodruff’s pitches have been fastballs, according to FanGraphs.com. He went to his slider 19.5% of time last season, his changeup 14.1% and his curveball 2.2%.

He’d made good progress with those pitches during Cactus League play, posting a 1.80 ERA in 10 innings over four appearances.

“You have to be able to make everything look the same coming out of the hand,” Woodruff said. “At home, I just kept working on trying to be consistent and trying to get to the point where I could throw any pitch in any count for a strike. I was just trying to tighten things up and be more consistent.”

Woodruff’s quarantine routine had him ready to throw four innings during his first outing of summer camp, a live batting practice session on the first day. He went five innings Thursday, throwing around 70 pitches. But most important to Counsell during this abbreviated and accelerated training camp, Woodruff reported no issues or discomfort Friday.

“That’s exactly what you want to see,” Counsell said. “His preparation, his progression is right on path to where we’d like it to be.”

Which leaves one burning question: Does that mean Counsell, who rarely tips his hand, is ready to name Woodruff as his Opening Day starter?

Woodruff’s showing on Thursday made quite the impression on first baseman Justin Smoak.

Signed to a one-year free agent deal last December, the switch-hitting slugger didn’t face any live pitching during baseball’s hiatus. Stepping into the box against some of the Brewers’ top pitchers has been quite the eye-opening experience.

“Facing some of the guys we’ve got, it’s not easy,” Smoak said. “I feel like every guy is 95 to 100. Hopefully for us as position players, facing these guys gets us ready maybe a little quicker than most just because the talent on the pitching staff I feel like is really, really good.”

Smoak was originally expected to share time at first base with Ryan Braun but with the NL adopting the designated hitter for 2020, it’s likely that Braun will fill that role on a fairly regular basis, leaving Smoak to handle first while also getting some time at DH.

“Early on in my career, DHing was not easy for me to do,” Smoak said. “When I would get days to DH it was kind of more of like my off day, but you’re still not off and so between at-bats I really didn’t know what to do. Over the last few years, I was able just to kind of treat every at-bat as its own.”

If you missed MLB Network’s “The Sounds of Baseball” installment featuring Brewers radio announcer Bob Uecker, the one-hour show will re-air at 3 p.m. Friday then again Sunday at 8 a.m.

Corey Knebel got his first game-type action in more than a year and Josh Hader saw his first outing of Summer Camp in the Brewers’ situational scrimmage.

Ben Gamel had the play of the game for a second straight day, following his diving grab in Thursday’s contest with the Brewers’ second home run of summer camp, a two-run shot off Josh Lindblom in the third inning.

With only two weeks until the season starts, Brewers general manager David Stearns says the team is prepared for any possibility.

Both players are asymptomatic and are expected to return to the team at some time during camp.

Ryan Braun knows he'll be fresher at the end of this season than he would be after a 162-game schedule. The NL also is adopting the DH, a move that could help lengthen his career.

Milwaukee Brewers reliever Corey Knebel believes the COVID-19 pandemic-imposed hiatus will enable him to be ready for the start of the season as he returns from Tommy John surgery.

The eldest daughter of Milwaukee Brewers pitcher Josh Lindblom underwent multiple heart surgeries as an infant, causing the family to be hypervigilant against exposing her to disease.

Brewers outfielder Lorenzo Cain is fresh off his first Gold Glove Award and completely healed from the knee injury that left him less than 100% for the final month of the 2019 season.

Brewers Omar Narváez catching on to pointers behind the plate

Catcher Omar Narváez was one of the busiest players in the Milwaukee Brewers’ spring camp, working double-time not only on his own game but also learning the ins-and-outs of the organization’s pitching staff.

After reaching the National League Championship Series in 2018 and falling in the NL wild-card game last year, the Brewers are seeking an unprecedented third straight playoff berth during this unusual 60-game season.

Brandon Woodruff earned his first All-Star Game invitation last season, when he went 11-3 with a 3.62 ERA.

Brewers' Brandon Woodruff, right, is congratulated by Orlando Arcia after hitting a home run against the Dodgers in Game 1 of the NLCS in 2018.