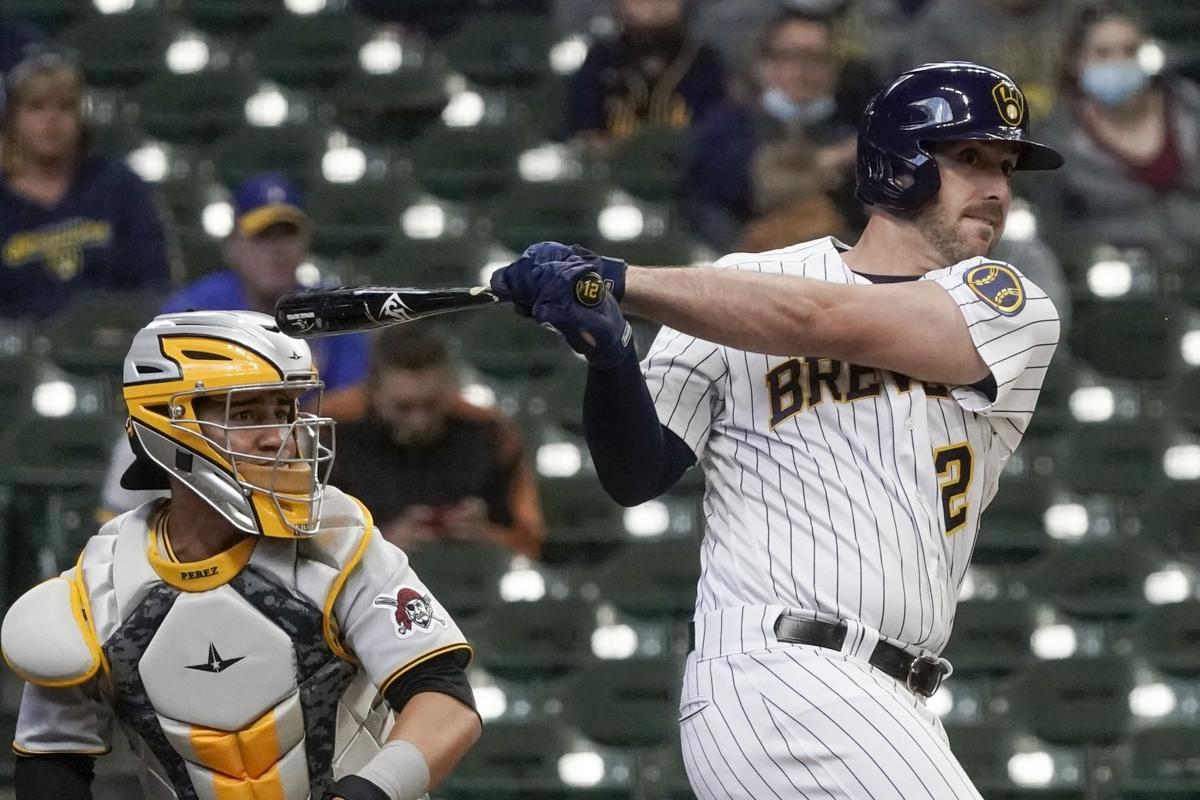 Brewers' Travis Shaw hits an RBI double during the first inning of Sunday's game against the Pirates at American Family Field.

MILWAUKEE — After losing 6-5 in 10 innings to the Pittsburgh Pirates on Sunday to finish their homestand 3-3, the Milwaukee Brewers packed their bags for a six-game road swing that starts Monday night in San Diego.

Waiting for them is a Padres team that made some pretty significant additions during the offseason, serving notice that they are dead set on knocking the NL West-rival Los Angeles Dodgers off of their championship perch.

Petco Park was jam-packed and amped up over the weekend as the Dodgers made their first visit of the season. Brewers right-hander Brandon Woodruff expects a similar atmosphere when he takes the mound to start the series opener.

"It's going to be a pretty good series," Woodruff said. "I know (the Dodgers series) was emotional for them, linking up for the first time, but I think anytime you go out, you want everybody's best."

Woodruff has been at his best through three starts this season. In 17 innings, he's allowed four earned runs on 10 hits and three walks while striking out 19. His last time out, he held the Chicago Cubs to one run on three hits while striking out six over six innings.

Despite the impressive results, Woodruff said it wasn't one of his better performances. He struggled at times with his command as well as maintaining his tempo. But he credited his experience, along with his work between starts, with helping him overcome those obstacles and put up numbers that left his teammates in a position to win.

"For me, that's the fun side of it, the (work) in-between (starts)," Woodruff said. "And then the days you pitch, you're there to compete and whatever happens, happens. I think I am in a good spot and I am trying to keep that going and keep it as consistent as possible."

His work over the past few days focused on studying an offense that owns a .726 OPS, the fourth-best mark in the National League, and features dangerous sluggers Fernando Tatis Jr., Manny Machado and Jake Cronenworth.

Woodruff faced a powerful Twins offense on Opening Day, then the slumping Cubs his next two times out. The Padres represent his biggest challenge yet this season, though he's not letting their numbers dictate his approach.

"They're a good team," Woodruff said. "They've got a lot of big names but at the end of the day, it doesn't change how I approach each start or how I'm going to pitch. I try to keep it as simple as possible because I think that's what works for me."

Milwaukee scored a total of 15 runs in the first inning during last season's 60-game slate, which manager Craig Counsell considered a leading factor in the offense's futility in 2020.

"It's a good stat," Counsell said. "It's certainly a great feeling. We've had a couple of games with big runs early, playing from a lead. We've talked about it from the other team's side of what it does to you. That's a nice trend to start, too. It puts the other team behind the eight-ball right away."

The early outbursts have helped give Milwaukee's starting pitchers more freedom to work against opposing lineups, specifically in terms of attacking the zone and playing more to contact knowing that there is some breathing room.

Right-hander Devin Williams worked a scoreless inning Sunday as he continues working back to his 2020 form.

Williams got off to a slow start in spring training while he continued recovering from a shoulder injury and made only four appearances in Cactus League play.

After giving up two runs in his first two outings — doubling his total from 2020 — Counsell moved Williams out of the set-up role in favor of lower-leverage situations in order for him to get settled in for a full season.

"Devin is feeling pretty good right now so I think we're getting there and making progress," Counsell said. "That was a big spot for us today, so it was good for him to have a good inning in a big spot."

Jackie Bradley Jr. went 2-for-3 Sunday to cap off a 6-for-13 series and extend his hitting streak to eight games. He's 11-for-33 during that stretch, raising his batting average from .100 at the start of the streak to .231. ... Avisail Garcia had a big series, going 4-for-11 with a home run and three RBIs, and went 10-for-21 on the homestand. ... Closer Josh Hader pitched a clean ninth inning. He's yet to allow a run or a hit and has walked one batter while striking out 10 in 3⅔ innings

While the Padres' batters try to figure out Woodruff, Milwaukee's offense faces right-hander Joe Musgrove (2-1, 0.47 ERA), who threw the first no-hitter of the season — and, the first in Padres history — his last time out.

Brewers' Travis Shaw hits an RBI double during the first inning of Sunday's game against the Pirates at American Family Field.