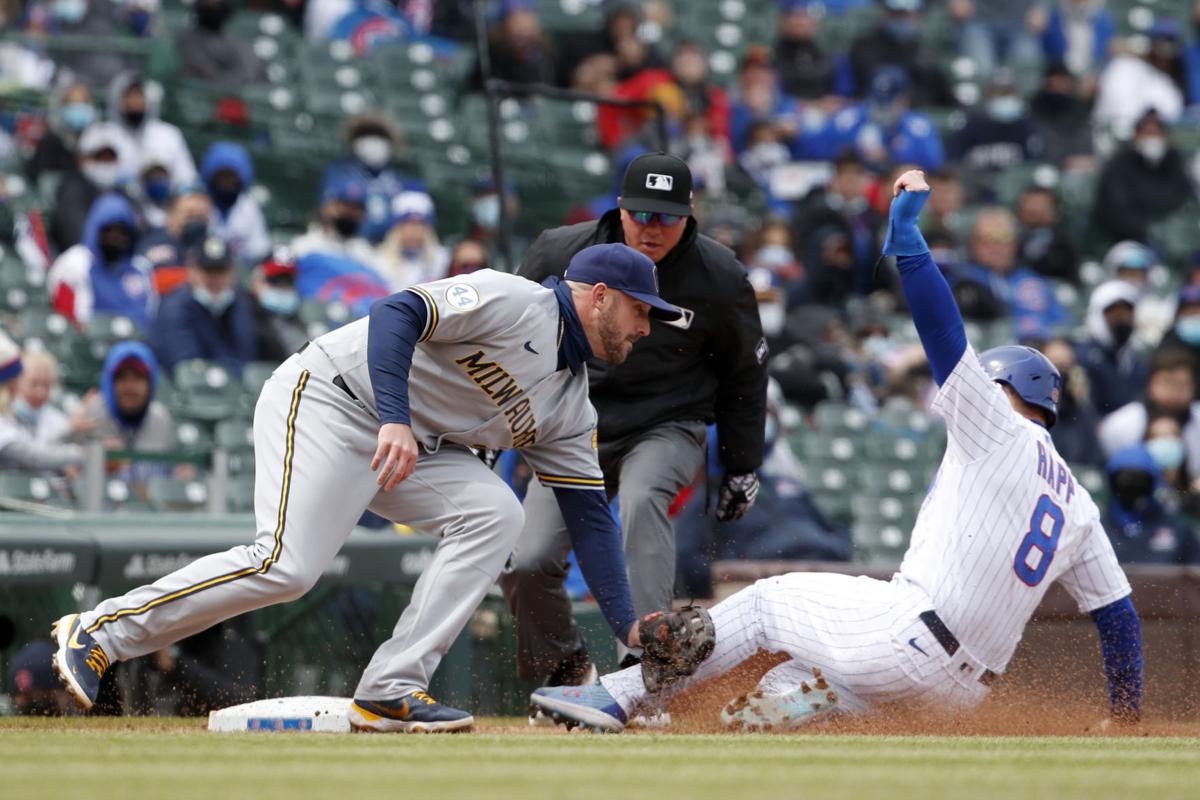 Brewers third baseman Travis Shaw tags out Cubs' Ian Happ on a stolen base attempt during the fourth inning Sunday at Wrigley Field. 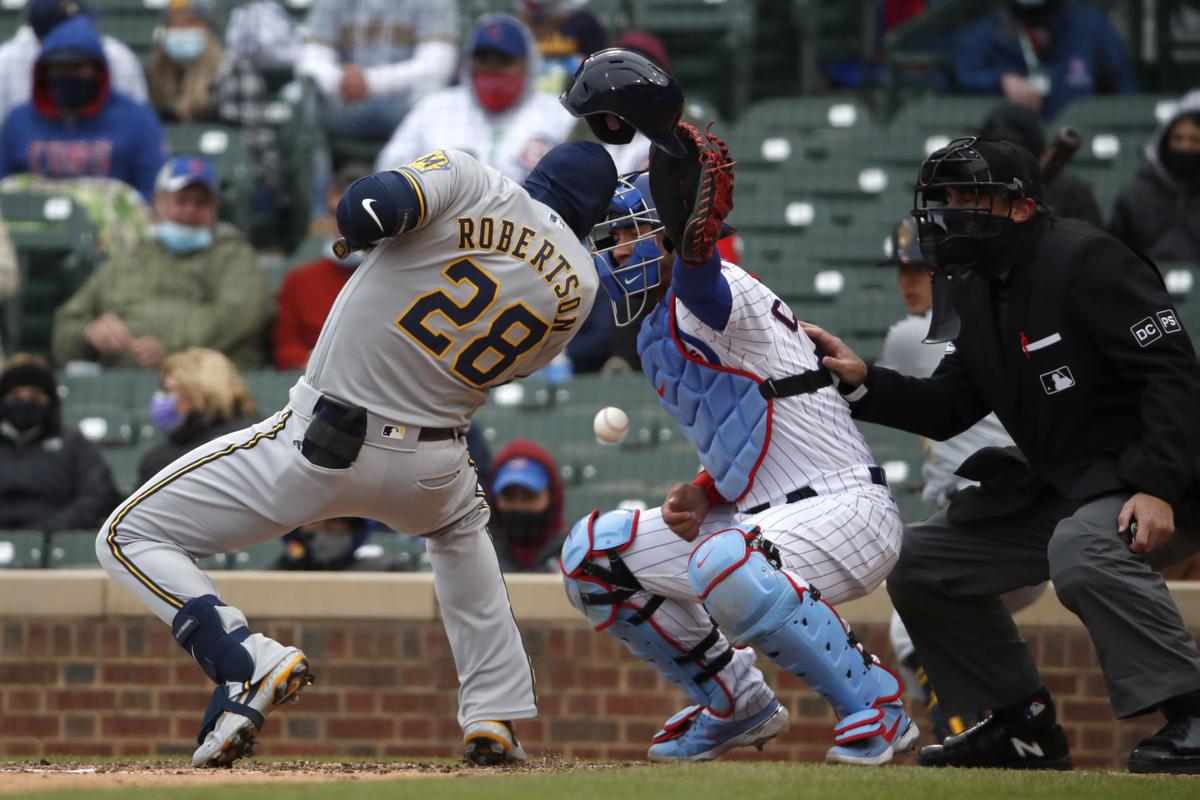 Brewers' Daniel Robertson is hit in the helmet by a pitch as Cubs' Willson Contreras reaches for the baseball during the ninth. Robertson remained in the game and scored later in the inning.

CHICAGO — The Milwaukee Brewers played three series against the Chicago Cubs in April, and won each one.

Not bad at all.

Woodruff (2-0) allowed two hits, struck out eight and walked two in his first win in 11 career appearances against Chicago. The 6-foot-4 right-hander has permitted one run and six hits in 19 innings covering three starts against the Cubs this year.

“There’s the familiarity there of just facing the guys,” Woodruff said. “Obviously they’ve seen me a lot. I’ve seen them. I think the biggest thing it just comes down to is executing pitches.”

Luis Urías hit a two-run single during Milwaukee's five-run ninth, helping the Brewers close out a 5-1 road trip. They also improved to 6-3 against the Cubs with 10 games left in their season series against the reigning NL Central champions.

Chicago finished with four hits, wasting a solid performance by Arrieta on a cold, windy day. The game-time temperature was 44 degrees, and the crowd of 10,343 bundled up in jackets, hooded sweatshirts and blankets.

“It was freezing out there,” Brewers second baseman Kolten Wong said.

Arrieta kept the Cubs in the game with six innings of two-hit ball. The right-hander struck out eight and walked three.

Milwaukee got its first run on Travis Shaw’s bases-loaded walk in the first. Arrieta retired 15 in a row after the Brewers’ first four batters reached safely.

The Brewers put runners on second and third with no outs in the sixth, but Arrieta (3-2) escaped by striking out Shaw, Keston Hiura and Billy McKinney.

“The mindset after the first was to get weak contact, try to preserve the pitch count, pitch as deep as I could into the ballgame,” Arrieta said. “And then, I ran into a tough spot there in the sixth and found a way out of it.”

Woodruff retired his first nine batters. Ian Happ walked and David Bote singled in the fourth for Chicago’s first baserunners, but Anthony Rizzo struck out and the Brewers turned an inning-ending double play when Kris Bryant struck out and Happ was caught stealing third.

Rizzo also struck out for the final out of the sixth, leaving a runner on third.

“Hit a couple balls hard right at guys early on,” Cubs manager David Ross said. “Found some ways to get runners on, just couldn’t really get the line moving too much. That’s kind of how the story goes sometimes when you’re facing an ace on the other side.”

Brewers infielder Daniel Robertson was shaken up when he was beaned by a fastball from Jason Adam in the ninth inning. He scored on Wong’s double and then was replaced in the field before the Cubs batted in the bottom half.

“He was feeling OK,” Counsell said. “But at the same time, you take a ball in the head, and we’ve got to be cautious and we’ve got to kind of stay on top of it and make sure we monitor it closely.”

Cubs reliever Ryan Tepera has had his three-game suspension for throwing at Milwaukee's Brandon Woodruff reduced to two games.

Tepera began his suspension with Sunday's series finale against the Brewers. The Cubs begin a four-game series at Atlanta on Monday night.

The 33-year-old Tepera threw a pitch behind Woodruff in the fifth inning of Chicago's 3-2 victory at Milwaukee on April 13. Cubs catcher Willson Contreras had been plunked earlier in the game, and Tepera said he wanted to send a message because he felt his team had been hit too often in the past couple of years.

He was eligible to come off the injured list this weekend, but was sent back to Milwaukee because Counsell said the outfielder had hit a "plateau" in his recovery.

"We basically just ruled out anything significant structurally that would show up on the MRI," Counsell said before Sunday's series finale against the Cubs. "We still need to make progress to get him back on the field and so from that perspective not much has changed. But we'll keep moving forward and see what some activity tomorrow at the field brings."

Milwaukee placed Yelich on the injured list April 17, with the move retroactive to April 14. He is batting .333 (10 for 30) in nine games this season.

Brewers center fielder Lorenzo Cain (quadriceps strain) worked out on the field Saturday, and Counsell said it went well. Milwaukee right fielder Avisaíl García returned to the starting lineup. He rested Saturday after he left the series opener with back tightness.

"We're not there yet, but I think it was a stepping stone yesterday, back on the field," Counsell said. "Whenever the players get on the field, it's a good sign to me. It means that the training room is starting to kind of step aside and we're starting to get into more baseball stuff. That's where we're at with Lorenzo. Now there'll be a progression of running and baseball stuff out on the field that we have to go through."

Brewers right-hander Corbin Burnes (2-1, 0.37 ERA) is scheduled to start Monday night in the opener of a three-game series against Miami at American Family Field. Left-hander Trevor Rogers (2-1, 1.64 ERA) is the scheduled starter for the Marlins.

Brewers third baseman Travis Shaw tags out Cubs' Ian Happ on a stolen base attempt during the fourth inning Sunday at Wrigley Field.

Brewers' Daniel Robertson is hit in the helmet by a pitch as Cubs' Willson Contreras reaches for the baseball during the ninth. Robertson remained in the game and scored later in the inning.