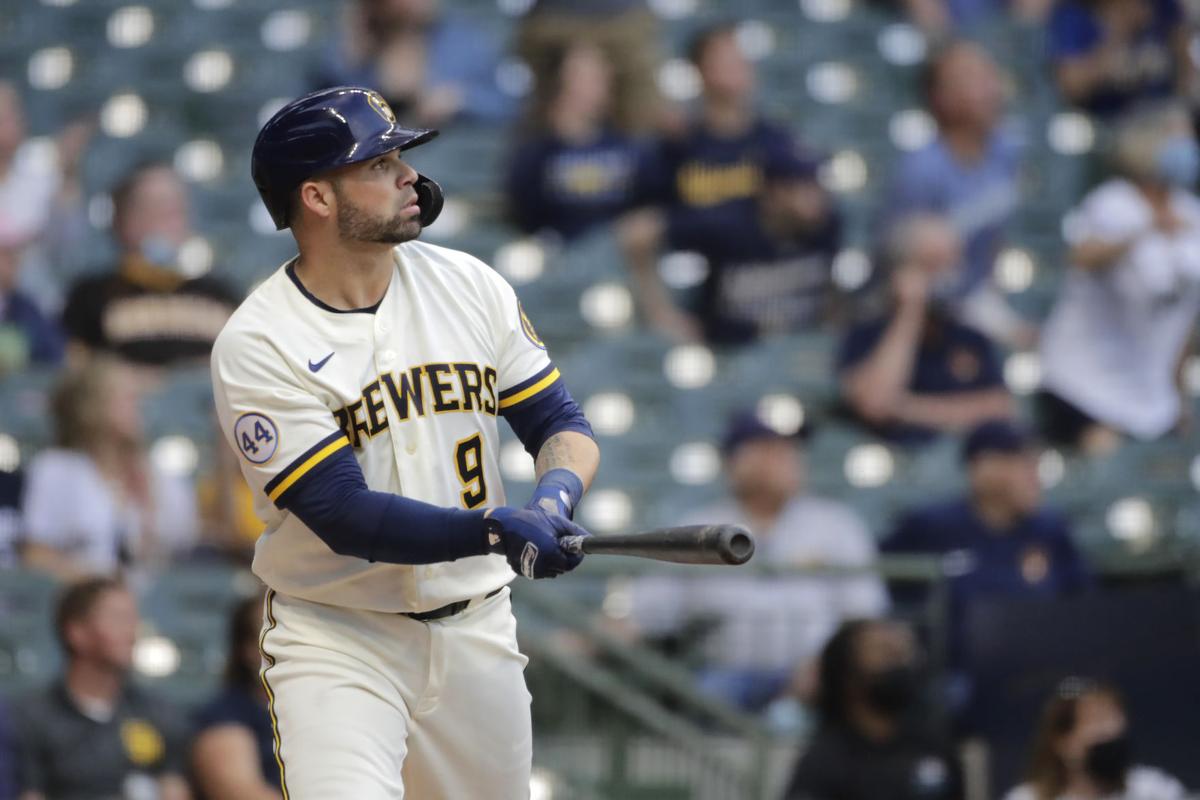 Fresh off sweeping a nine-game homestand, the Padres trailed 5-0 going into the ninth.

Tommy Pham hit a two-run homer off Angel Perdomo in the ninth. Hader relieved with a runner on first and no outs, and gave up Eric Hosmer’s RBI double with one out and then a walk.

Hader settled down to retire Austin Nola on a popup and Ha-Seong Kim on a lineout for his 11th save of the season.

“I was proud of the way we kept battling,” Padres manager Jayce Tingler said. “I thought our at-bats against Hader were about as good as we could have.”

Brandon Woodruff (3-2) gave up three hits over seven innings against a Padres team that had won 12 of 13. He struck out eight and walked none.

“That’s a championship-level, playoff-caliber pitcher out there,” Tingler said. “We knew it was going to be a tough challenge tonight with him on the mound. We just weren’t able to square up enough heaters tonight and he got stronger as he went. ”

Woodruff hasn’t allowed a run in three of his nine starts this season.

“They’re the hottest team in baseball, best record and everything, they’ve got a lot of big names in that lineup,” Woodruff said. “The thing is you really have to make some pitches and mix it up. You can’t get too predictable. They’re tough. Try to make my pitches and go from there.”

Manny Pina hit a two-run homer in the second off Blake Snell (1-1).

Avisail Garcia led off the fourth with a homer and Kolten Wong’s two-out, two-run single later in the inning finished Snell.

“I thought his fastball and his secondary pitches were good,” Tingler said. “He was missing down and he wasn’t able to get it back in the zone.”

Keston Hiura went 1-for-3 with a walk and scored a run as he returned to the Milwaukee lineup for the first time since being sent to Class AAA Nashville this month after batting .152 with a home run and five RBIs.

“Obviously, that first month wasn’t an ideal situation for me,” Hiura said. “It was more trying to clear my head, get things right. I knew things weren’t far off.”

Dinelson Lamet will return from the bullpen to start Friday when the Padres face the Astros in Houston. San Diego manager Jayce Tingler is turning to a six-man rotation with his team playing 20 straight games without a day off.

“It’s good for everybody,” Tingler said. “Look, things can change quickly, but as of right now, I like the idea of everybody getting an extra day of rest in between their starts.”

Lamet made three starts and worked out of the bullpen twice in an effort to ease him back to form following a strained elbow ligament last September.

Padres: Third baseman Manny Machado (shoulder tightness) was showing signs of improvement but was held out of the starting lineup for a fourth straight game Monday. ... Outfielder Trent Grisham, who hasn’t played since homering Friday night, was placed on the 10-day injured list with a bruised heel. “We just think it’s best, long-term right now, that we let that heal up,” Tingler said. “We just want to make sure he’s not pounding the ground with it.”

Brewers: Reliever Eric Yardley (right shoulder) returned to Milwaukee after working two scoreless innings over the weekend while on a rehab assignment with Nashville and is expected to be reinstated from the injured list later this week, Brewers manager Craig Counsell said. Yardley, who posted a 1.54 ERA in 24 appearances last season, had allowed seven runs over 11 innings in 10 outings before the injury. ... Outfielder Christian Yelich, who hit his first home run of the season Sunday, was out of the lineup Monday for a planned day off as he is eased back into action after missing more than a month with back soreness.

Daniel Robertson hit his first home run in more than two years, a tiebreaking, seventh-inning drive in his second game back from a concussion, as Milwaukee beat Cincinnati 4-3 on Saturday.

Brewers shortstop Luis Urias struggling in the field, at the plate

The 23-year-old is enduring a "mental slump," manager Craig Counsell says, and received a day off in the finale of the two-game series at Kansas City.

Milwaukee's 3.3 runs per game this month ranks 29th in the majors.

Milwaukee managed just two hits, one a solo home run by Travis Shaw, in the  7-1 loss to San Diego.

Milwaukee went 1-for-10 with runners in scoring position and had the tying run thrown out at the plate in the 10th inning.

Jackie Bradley Jr.’s two-out shot off the right-field wall brought home Omar Narváez to give Milwaukee a 6-5 victory over the San Diego Padres on Thursday at American Family Field.

The series opener between the Milwaukee Brewers and Washington Nationals on Friday night was postponed because of inclement weather.