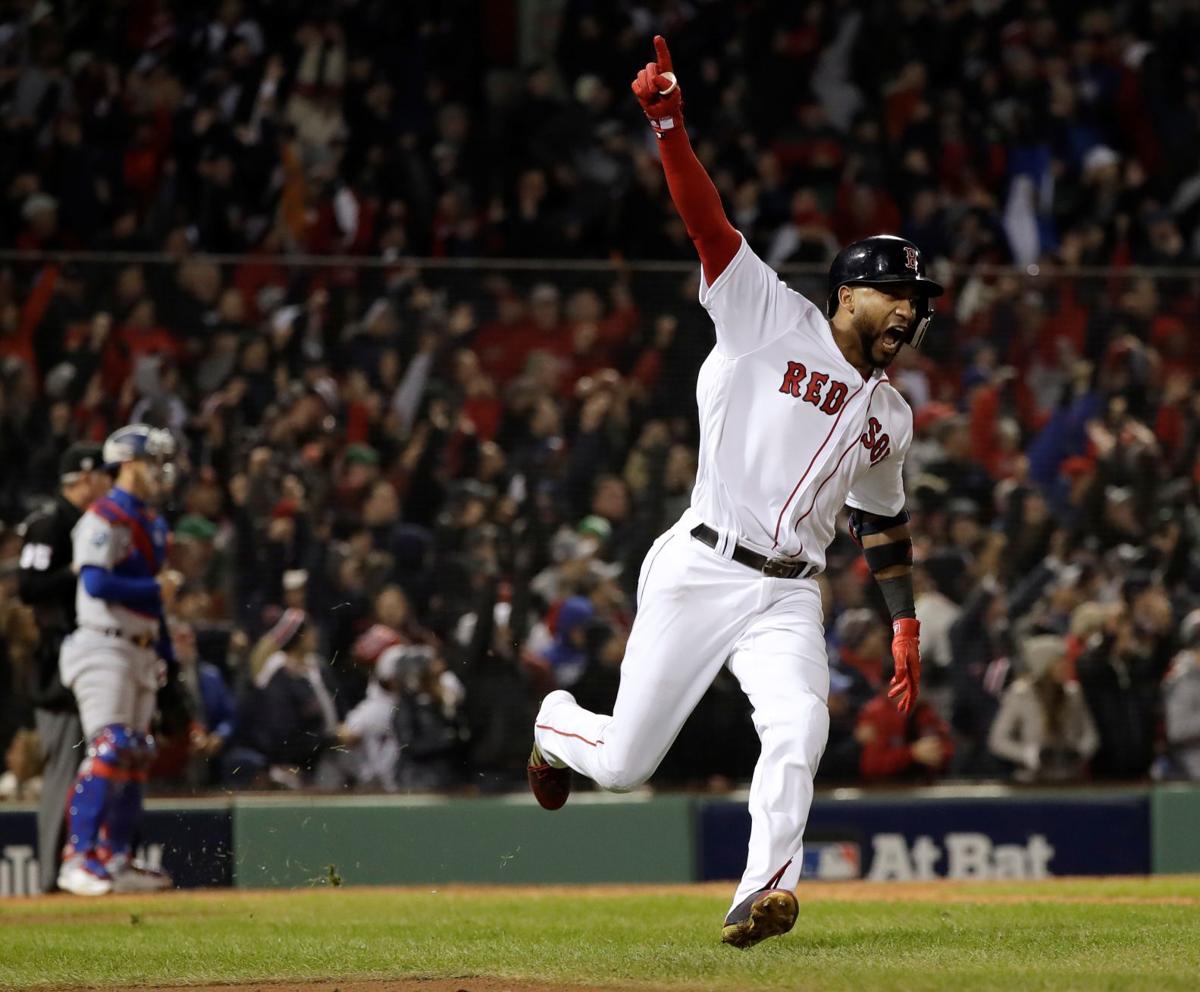 Eduardo Nunez reacts after hitting a three-run home run off left-hander Alex Wood to put the Red Sox up 8-4 over the Dodgers in the seventh inning of Game 1 of the World Series on Tuesday night at Fenway Park in Boston. 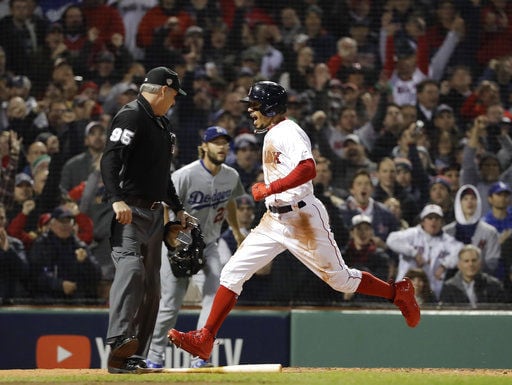 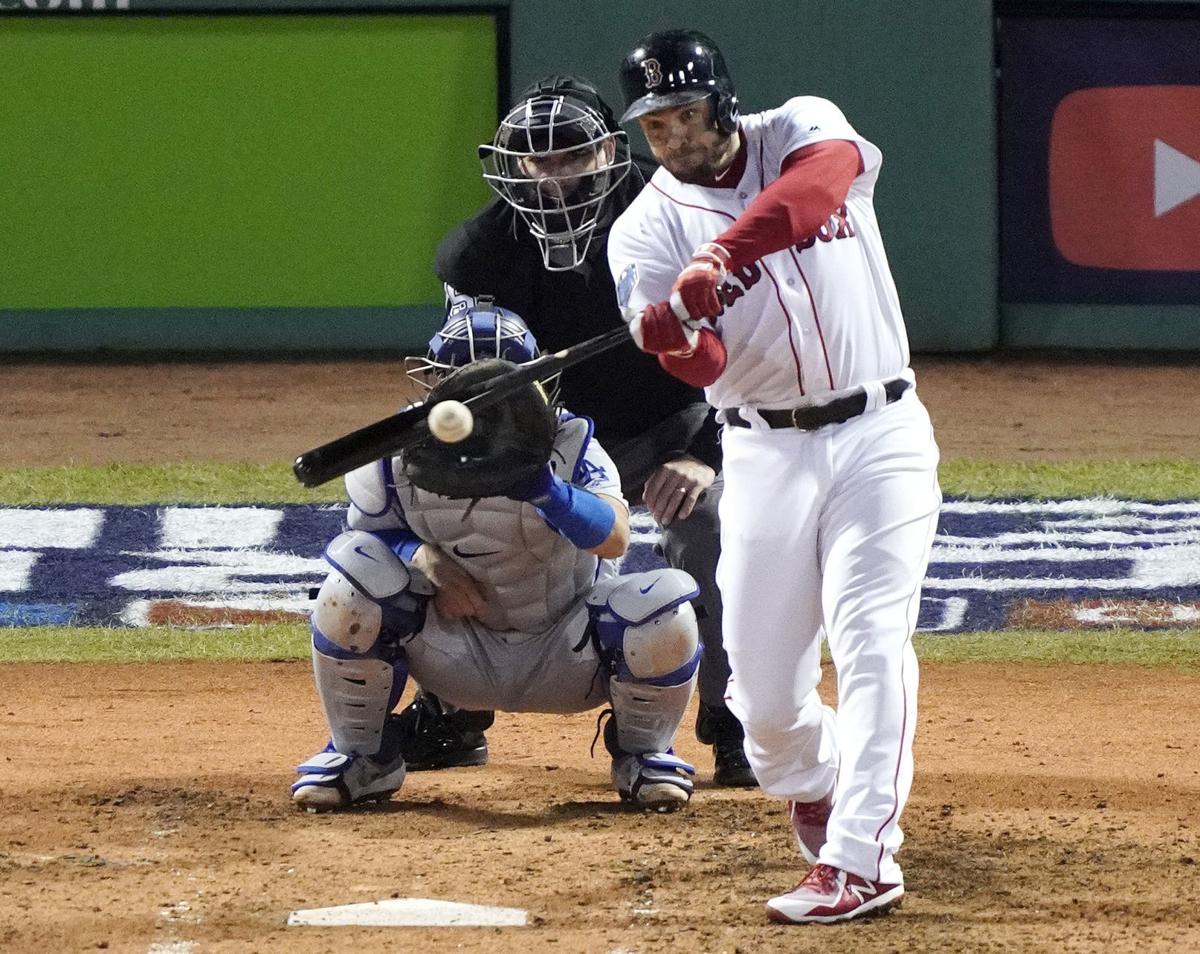 J.D. Martinez hits an RBI double off Dodgers starter Clayton Kershaw in the third inning to give the Red Sox a 3-2 lead. 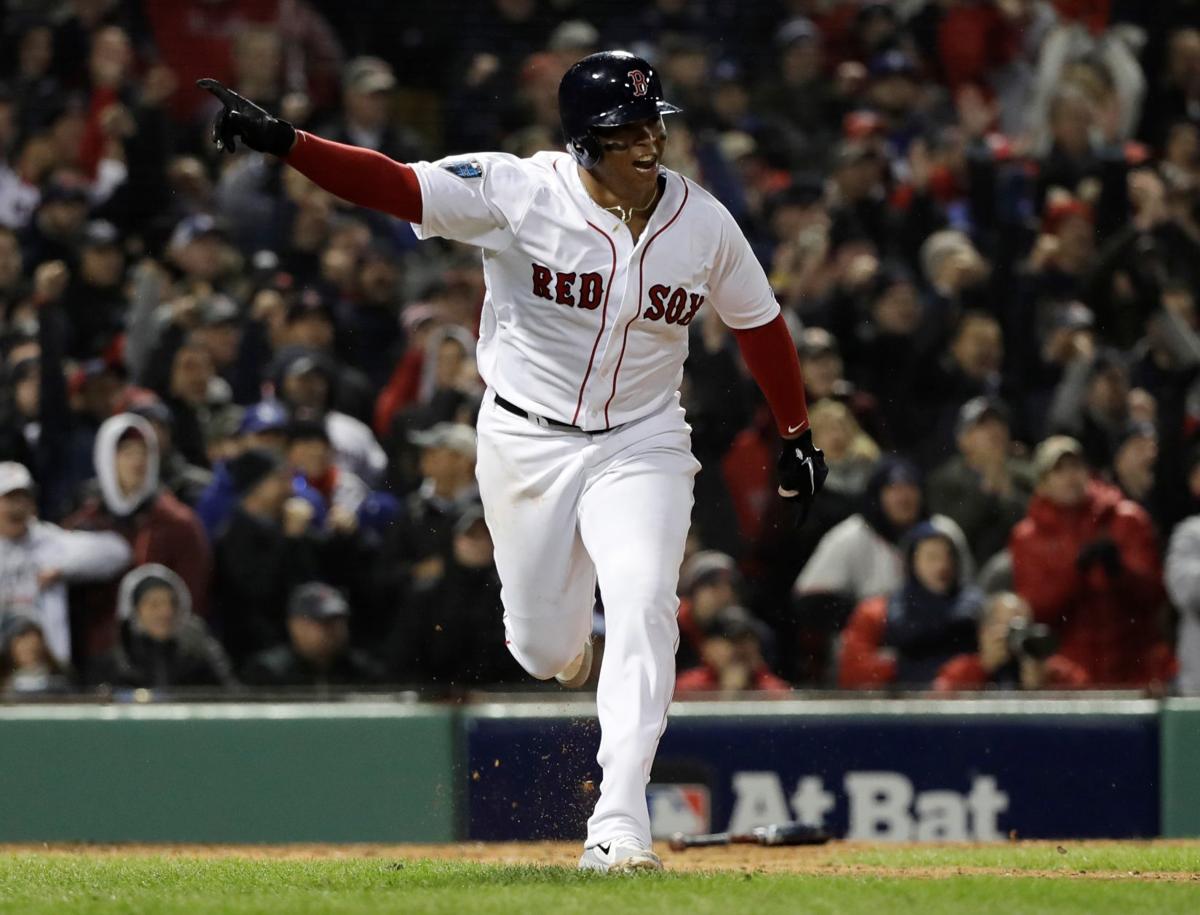 Rafael Devers hits an RBI single to score Andrew Benintendi to put the Red Sox up 5-3 in the fifth inning of Game 1 of the World Series on Tuesday night at Fenway Park in Boston. 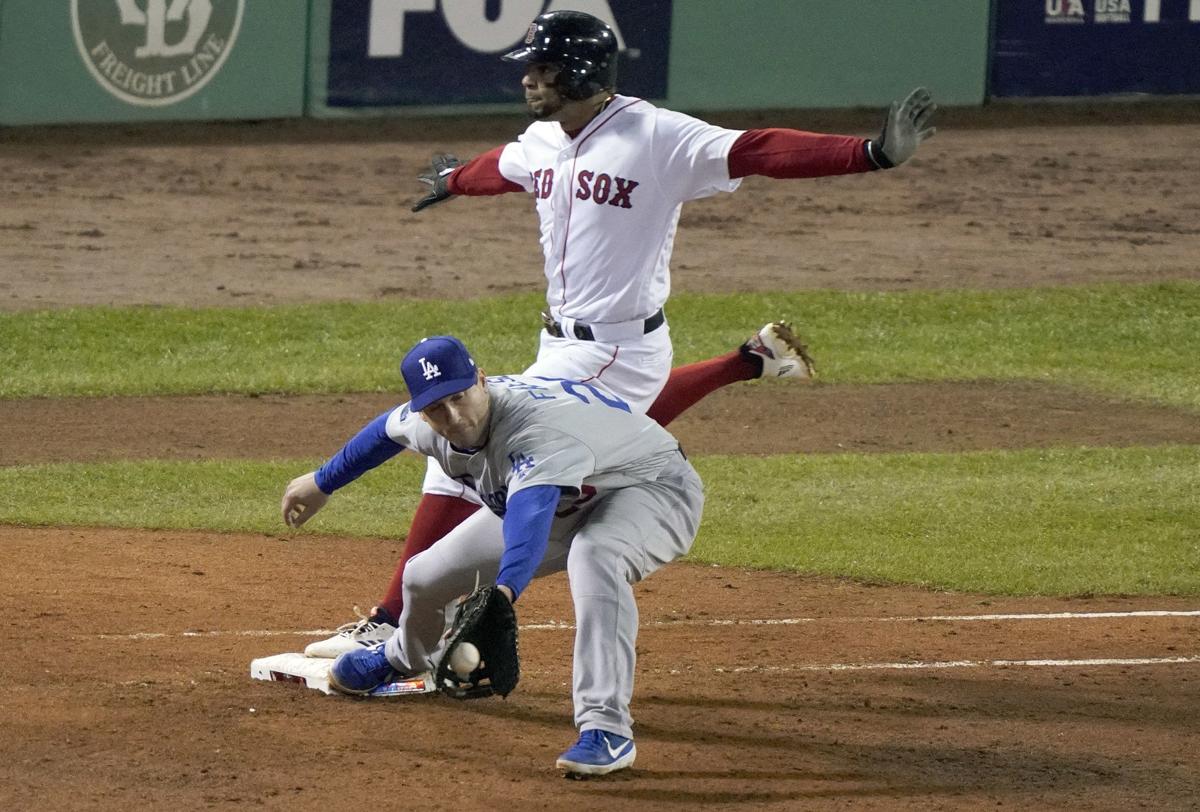 Xander Bogaerts beats the throw to Dodgers first baseman David Freese, driving in a run on a fielder's choice to put the Red Sox up 4-3 in the fifth inning.

BOSTON — The Fenway Funhouse proved too tricky, too cold and just too much for the beach boys.

Andrew Benintendi, J.D. Martinez and the Boston Red Sox came out swinging in the World Series opener, seizing every advantage in their quirky ballpark to beat the Los Angeles Dodgers 8-4 on a chilly, windy Tuesday night.

Benintendi had four hits, Martinez drove in two early runs and pinch-hitter Eduardo Nunez golfed a three-run homer to seal it. The 108-win Red Sox got a solid effort from their bullpen after an expected duel between aces Chris Sale and Clayton Kershaw never developed.

From the get-go, old Fenway Park caused all sorts of problems for the Dodgers.

Mookie Betts led off for the Red Sox with a popup that twisted first baseman David Freese as he tried to navigate the tight foul space near the stands and gauge the gusts. Lost, he overran the ball and it dropped behind him.

"You never really know," Benintendi said. "The flag will be blowing one way, and the wind is actually blowing the other. You have to be on your toes pretty much."

Given a second chance, Betts lined a single that set up a two-run first inning.

"It was important for us to score first and kind of put some pressure on them," he said.

In the seventh, newly inserted left fielder Joc Pederson looked hesitant as he chased Benintendi's soft fly, rushing toward the seats that jut out down the line. The ball ticked off his glove for a ground-rule double, and soon Nunez connected off Alex Wood to break open a 5-4 game.

"We didn't play the defense that we typically do. I thought we left some outs out there," Dodgers manager Dave Roberts said. "And it didn't make Clayton's job any easier."

The crowd and cold temperatures were no picnic for Los Angeles, either.

The oddly angled ballpark became an echo chamber even before the first pitch. Chants of "Beat LA!" began early, Kershaw got heckled with a sing-song serenade and Dodgers villain Manny Machado heard loud boos all evening.

Only one person wearing Dodger blue drew a cheer: Roberts, saluted in pregame introductions for the daring steal that turned the tide in Boston's 2004 playoff comeback against the Yankees.

"I think we had the advantage tonight with the weather and stuff. We've been playing through it," Red Sox pitcher Nathan Eovaldi said.

It was 53 degrees at first pitch and it dropped into the mid-40s by the end. That was the coldest game for Los Angeles this season and quite a contrast from last year's World Series, when it was a record 103 degrees for the opener at Dodger Stadium against Houston.

"We won Game 1 last year and lost the Series, so maybe we'll try it out this way. See if we can win one," Kershaw said.

Game 2 is Wednesday night, when it's supposed to be even colder. David Price, fresh from beating Houston in the ALCS clincher, starts against Hyun-Jin Ryu.

Both teams rely heavily on analytics, and it showed: With each manager searching for the most beneficial matchup, the clubs combined to use 12 pitchers and six pinch-hitters.

Benintendi scored three times for Boston, trying for its fourth championship in 15 seasons.

Matt Kemp homered and Justin Turner had three hits for the Dodgers, aiming for their first crown since 1988. Machado drove in three runs, and his RBI grounder in the fifth inning made it 3-all.

Boston retook the lead in the bottom half when Xander Bogaerts hustled to beat out a potential inning-ending double play — Dodgers reliever Ryan Madson seemed to celebrate a little too early.

Rafael Devers followed with an RBI single, making it 5-3 and giving himself an early birthday present. He turned 22 at midnight, three minutes before the game ended.

Martinez, who led the majors with 130 RBIs, gave the crowd a scare when his foot slipped rounding second base on a run-scoring double in the third. He fell hard, but soon got up.

Steve Pearce, ruled safe at first on a replay review, scored from there on Martinez's double. The ball hit a metal garage-type grate on the far center-field wall and took a weird carom, giving Pearce extra time to score.

A garage-style grate, used for groundskeeping vehicles and such. What other park has that in play?

A day before this opener, Kershaw and most of the Dodgers pooh-poohed the prospect that Fenway would cause them trouble. Most of them had never played at the oldest ballpark in the majors, built in 1912, but said they were sure they'd be OK.

It didn't quite turn out that way in their first trip to Fenway since 2010.

Besides, clubs coming to Beantown have other things to worry about.

"I think the biggest challenge for a team coming in here is you're playing the Boston Red Sox," Eovaldi said Monday.

The only other time the Dodgers and Red Sox met in the World Series was 1916, when Babe Ruth helped pitch Boston to the championship. Those games were at Braves Field, the bigger home park of the city's National League franchise.

Kershaw and Sale each started out wearing short sleeves, but neither warmed to the possibility of the marquee matchup. In similar outings, both were pulled before getting an out in the fifth.

Kershaw took the loss in his first appearance at Fenway, tagged for five runs on seven hits and three walks. The three-time NL Cy Young Award winner fell to 9-9 in the postseason, his October results falling short of his brilliant regular-season resume.

"All the way around it wasn't a good night," Kershaw said.

Sale threw 91 pitches in his first outing since the ALCS opener. He was hospitalized last week for an unspecified stomach illness.

Matt Barnes, the first of six Boston relievers, got the win. Eovaldi pitched the eighth and Craig Kimbrel worked the ninth as the Red Sox bullpen held the Dodgers to one run on three hits in five innings.

Boston manager Alex Cora won in his first try guiding a club in the Series. This also marked the first World Series game between teams led by minority managers.

Red Sox great Carl Yastrzemski bounced the ceremonial first pitch, and decided that just wouldn't do. So he called for another ball, and the 79-year-old Hall of Famer threw a strike to injured Boston star Dustin Pedroia.

The Red Sox have won Game 1 in six straight World Series, dating to 1975 vs. the Big Red Machine. ... Boston is 8-0 this postseason when scoring first. ... The team that wins the opener has won 62 percent of the championships.

Price had been 0-9 in 11 postseason starts before pitching six scoreless innings to help close out the Astros in Game 5. Ryu was 1-1 with a 3.40 ERA in three playoff starts this year.

Red Sox have their own history with Manny Machado's dirty play

October's villain is especially despised at Fenway Park for planting his spikes into Dustin Pedroia in April 2017. The Boston second baseman hasn't been the same since.

The seven-time All-Star has been regaining strength since his release Monday from Massachusetts General Hospital, where he spent Sunday night for observation because of a stomach illness.

Red Sox finish off Astros in 5 games, head to World Series against Brewers or Dodgers

David Price put his postseason woes behind him, pitching the Red Sox past the defending champion Houston Astros 4-1 Thursday night in Game 5 of the AL Championship Series.

From playoff flop to October ace in two legacy-shifting starts, David Price earned his second postseason victory in a row and moved the Boston Red Sox halfway to yet another World Series title.

Back by the beach, Dodgers turn to rookie Walker Buehler as they look to get hot in World Series

While the World Series isn't quite a trip to the beach, the Boston Red Sox anticipate staying hot in balmy California, and the Los Angeles Dodgers hope a warm welcome will help them reverse a 2-0 deficit.

Muncy homered to left-center on a full-count pitch from Nathan Eovaldi, ending the longest World Series game in history early Saturday and pulling the Dodgers to 2-1 in the best-of-seven matchup.

Steve Pearce hit a tying homer in the eighth inning and a three-run double in the ninth, and the Red Sox emphatically rallied for a 9-6 victory over the Los Angeles Dodgers on Saturday.

Manny Machado's first World Series one to forget for Dodgers

Machado struggled against the Boston Red Sox in his first World Series, going 4 for 22.

Eduardo Nunez reacts after hitting a three-run home run off left-hander Alex Wood to put the Red Sox up 8-4 over the Dodgers in the seventh inning of Game 1 of the World Series on Tuesday night at Fenway Park in Boston.

J.D. Martinez hits an RBI double off Dodgers starter Clayton Kershaw in the third inning to give the Red Sox a 3-2 lead.

Rafael Devers hits an RBI single to score Andrew Benintendi to put the Red Sox up 5-3 in the fifth inning of Game 1 of the World Series on Tuesday night at Fenway Park in Boston.

Xander Bogaerts beats the throw to Dodgers first baseman David Freese, driving in a run on a fielder's choice to put the Red Sox up 4-3 in the fifth inning.