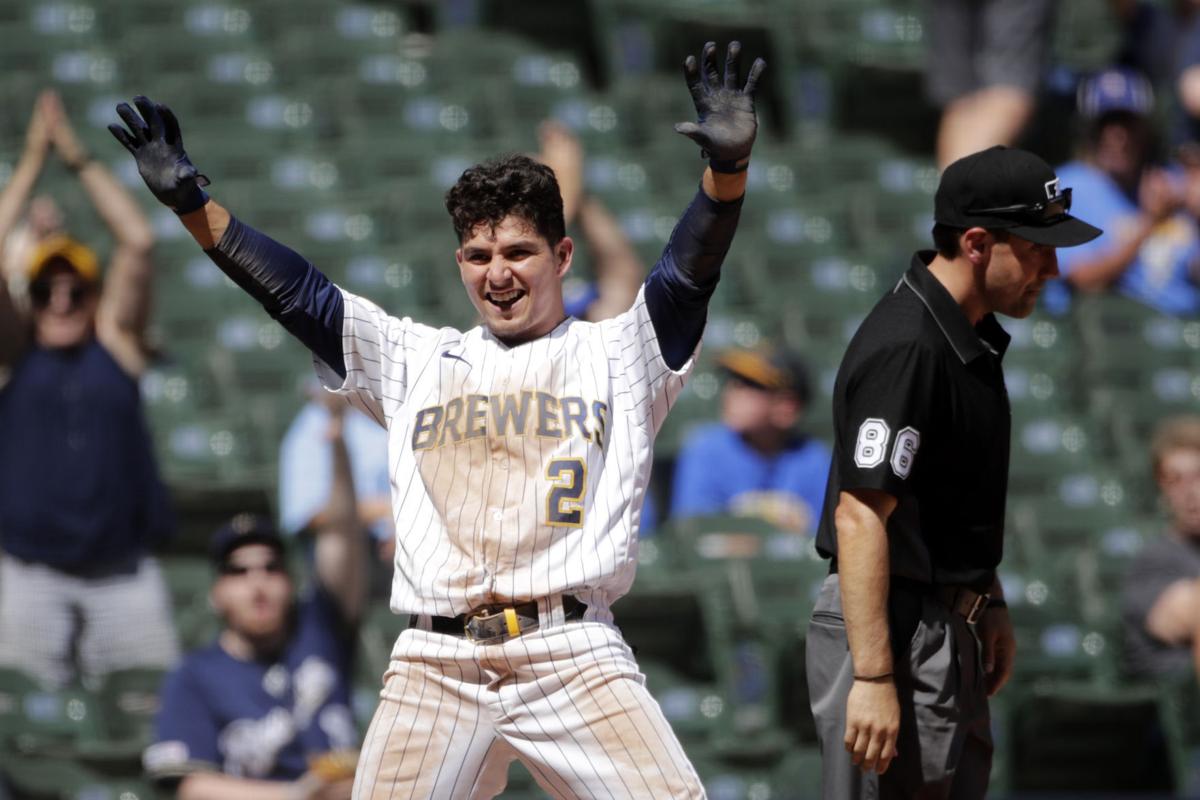 Brewers' Luis Urias gestures to the dugout after hitting an RBI triple during the sixth inning Sunday at American Family Field.

MILWAUKEE — Avisaíl García hit a two-run homer, Christian Yelich provided a pinch-hit sacrifice fly on his bobblehead day and the Milwaukee Brewers completed a three-game sweep of the Pittsburgh Pirates with a 5-2 win on Sunday at American Family Field.

“We had opportunities today and left people on base,” Pirates manager Derek Shelton said after his team left 10 on base and went 1-for-7 with runners in scoring position. “We left too many guys on base.”

The Pirates have lost seven straight. They were swept in back-to-back series after losing three at home against the Dodgers before heading to Milwaukee.

Brent Suter (8-3) picked up the win, getting the final out in the sixth. Brad Boxberger handled the seventh, Devin Williams the eighth and Josh Hader struck out the side in the ninth for his 17th save in as many chances.

“We get to play a kid’s game for a living,” Crowe said. “I got to use that as my mentality.”

Crowe allowed a leadoff single to Luis Urías and an RBI double by Daniel Vogelbach in the first, then retired the next 15 batters, striking out a career-high eight, before walking Tim Lopes to start the sixth.

“Crowe, he was sensational and gave them a great opportunity,” Brewers bench coach Pat Murphy said. “(He) stifled us for a while.”

Murphy filled in for manager Craig Counsell, who was at his son Brady’s high school graduation

Pittsburgh turned to David Bednar (0-1) to protect the 2-1 led and Urías hit a run-scoring triple to tie it at 2. García then drove the first pitch just over the right-field wall for his 13th home run of the season.

“While their starter deserves a lot of credit, we put together some team offense when it counted,” Murphy said.

Jacob Stallings chased Milwaukee starter Adrian Houser with his fifth homer, a two-out shot that landed in the Brewers bullpen in left.

“I think it’s a great gesture on his part to be with his family first,” Murphy said of Counsell’s decision. “That’s what the organization stands for.”

Adam Frazier came in batting .333 on the trip and added two more base hits against the Brewers to improve to .385 (5-for-13). He’s hit safely in eight of his last nine games at American Family Field and 25 of the last 27 games overall.

Yelich almost had a scheduled game off. The Brewers remain cautious after his two stints on the 10-day injured list (lower back strain) already this season. ... Phillip Evans replaced Pirates first baseman Colin Moran before the Brewers batted in the second. Moran has low back tightness and is day-to-day.

Brewers left-hander Eric Lauer (1-2, 4.82 ERA) squares off against right-hander Vladimir Gutiérrez (2-1, 2.65 ERA) and the Cincinnati Reds in the first of three games.

Prior to the game, Milwaukee announced the acquisition of right-handed reliever Hunter Strickland from the Los Angeles Angels.

Milwaukee goes scoreless and hitless after the second inning in a 10-2 loss to Cincinnati at American Family Field.

Brewers' Luis Urias gestures to the dugout after hitting an RBI triple during the sixth inning Sunday at American Family Field.