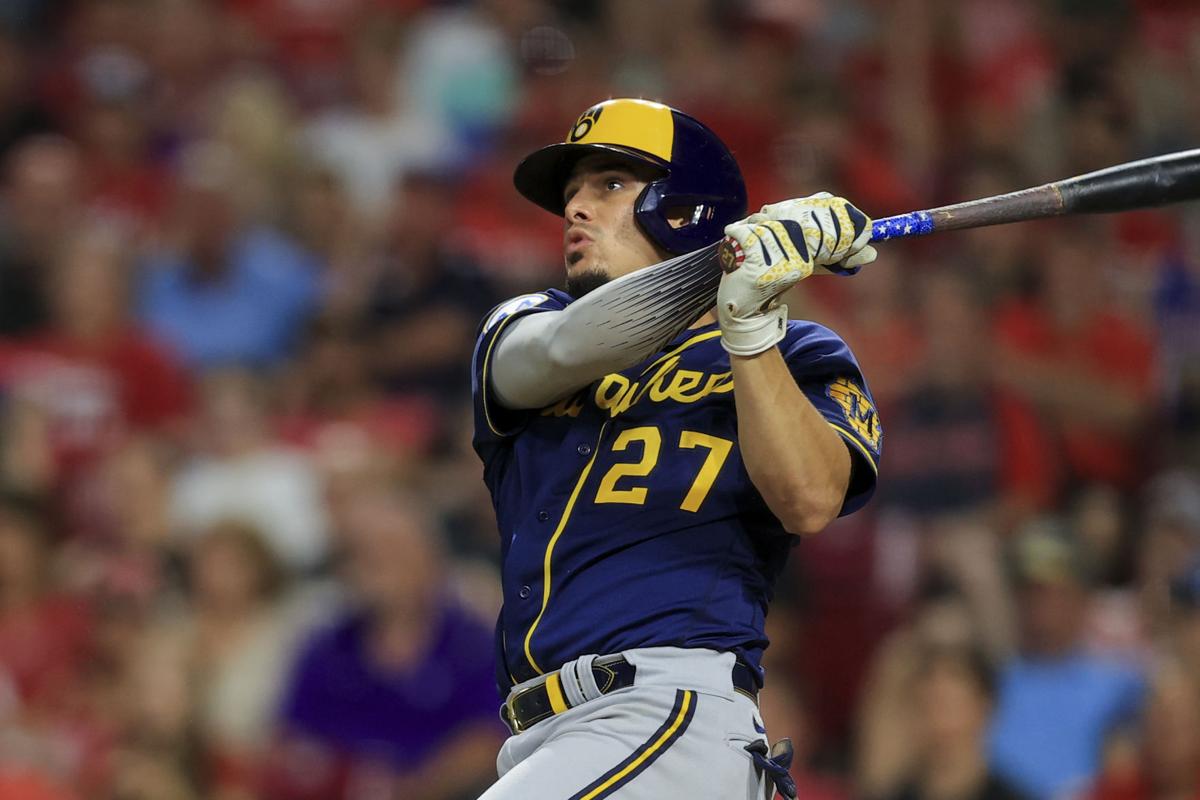 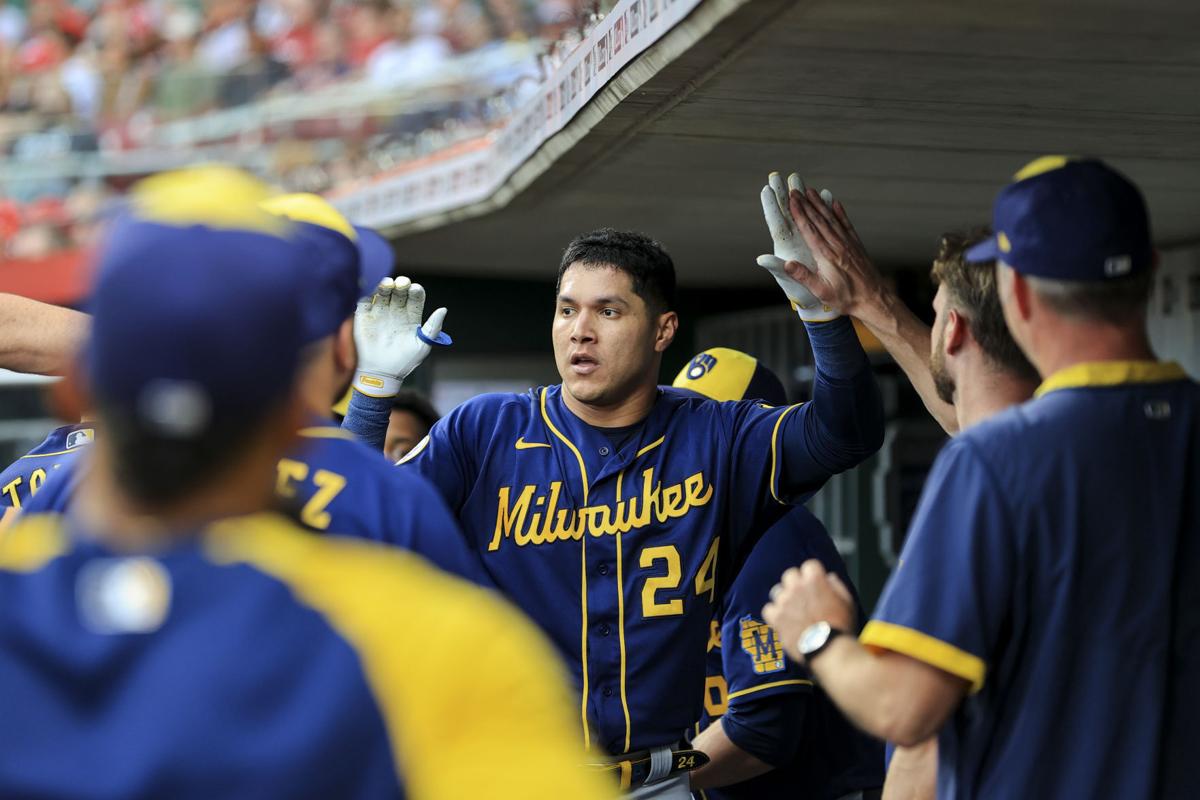 Brewers' Avisail Garcia celebrates with teammates in the dugout after hitting a solo home run during the second inning.

CINCINNATI — Willy Adames homered and drove in four runs as the Milwaukee Brewers rallied to beat the Cincinnati Reds 11-6 on Friday night.

Adames had a two-run shot in the fifth inning and then doubled home two more in a five-run eighth that buried the Reds.

After losing three straight to the Reds in Milwaukee before the All-Star break, the Brewers won the first of a three-game set in Cincinnati and pushed their lead in the NL Central back to five games.

“This team beat us three times in a row, so just getting a win against them, starting off the second half in a good way, starting off a big series in a big way, it was meaningful for sure,” Milwaukee manager Craig Counsell said.

The Reds got a scare in the third inning when All-Star Nick Castellanos, the team’s best hitter, was hit on the right wrist by a pitch. X-rays after the game showed no broken bones, but Castellanos could miss some time, manager David Bell said.

“It is not broken, so he’s pretty sore,” Bell said. “A little early to tell about tomorrow or this weekend. But great news that it’s not broken. It got him in a spot that it easily could have been broken.”

With the Reds leading 5-3 in the sixth, Luis Urías hit an RBI double against Tyler Mahle. Reliever Amir Garrett (0-3) came in and Jackie Bradley Jr. hit a bouncing ball deep into the shift that second baseman Jonathan India misplayed, allowing Urías to race home with the tying run.

Kolten Wong, playing his first game since coming off the injured list, singled home Bradley for the Brewers’ first lead of the night.

Urías hit a one-out homer in the eighth, Adames drove in two with a double, and two more runs scored on wild pitches by Ryan Hendrix to give Milwaukee a six-run lead.

“We took every advantage they gave us,” said Adames, who came over in a four-player trade with Tampa Bay in May.

“He’s getting huge hits,” Counsell said of the 25-year-old shortstop. “They come at big times, they change the complexion of games, and he’s doing it often. He’s been just incredible since we acquired him. He’s changed our team, and our team changed when he got here.”

Tyler Naquin and Eugenio Suárez hit two-run doubles and Aristides Aquini homered for the Reds, who lost for the third time in the last 12 games.

“It was just poor,” said Mahle, who allowed five runs and six hits in 5⅓ innings. “All I needed to do was keep the team in the game, and I didn’t do that.”

Milwaukee starter Freddy Peralta is sitting out the Reds series for rest, and Counsell said the 25-year-old right-hander likely won’t go again until next weekend’s series against the White Sox.

A late addition to Tuesday’s All-Star Game roster, Peralta struck out Adolis García of Texas, Boston’s J.D. Martinez and Matt Olson of Oakland in the seventh inning, becoming the first Brewers hurler to strike out the side in an All-Star appearance.

The Brewers send All-Star right-hander Brandon Woodruff (7-4, 2.06 ERA) to face Reds right-hander Luis Castillo (3-10, 4.65) on Saturday night. The hurlers started against one another on Sunday but neither figured in the decision. Woodruff worked six scoreless innings and Castillo gave up a run in 5⅓.

Christian Yelich doubled home the go-ahead run in the 11th inning and the Brewers beat the Reds 7-4 Saturday night to widen their lead in the NL Central.

Manny Pina's two-run single in the second all the offense Milwaukee can muster.

Brewers' Avisail Garcia celebrates with teammates in the dugout after hitting a solo home run during the second inning.