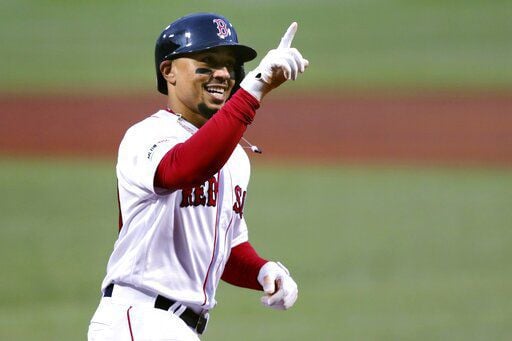 FILE - In this April 30, 2019, file photo, Boston Red Sox's Mookie Betts smiles as he crosses home plate on his solo home run off Oakland Athletics starting pitcher Aaron Brooks in the first inning of a baseball game at Fenway Park in Boston. Betts and the Red Sox agreed Friday, Jan. 10, 2020, to a $27 million contract, the largest one-year salary for an arbitration-eligible player. (AP Photo/Charles Krupa, File) 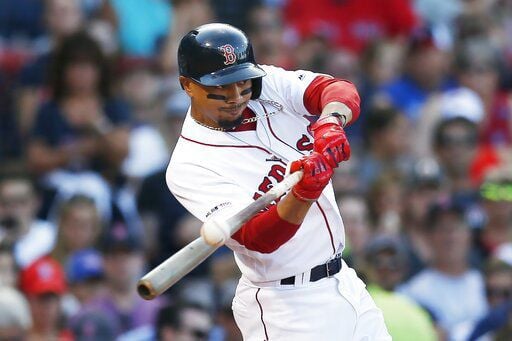 FILE - In this Aug. 10, 2019, file photo, Boston Red Sox's Mookie Betts hits an RBI-double during the sixth inning of a baseball game against the Los Angeles Angels in Boston. Betts has agreed to a $27 million contract with the Red Sox. It is the largest one-year salary for an arbitration-eligible player. (AP Photo/Michael Dwyer, File)

LOS ANGELES — Nearly a week after agreeing to a seismic trade that would've sent superstar Mookie Betts to the Los Angeles Dodgers before the Boston Red Sox got cold feet at the finish line, angering people at all levels of the baseball industry, the two sides finally agreed to a slightly different deal Sunday, according to two people with knowledge of the situation.

The Red Sox, a deep-pocketed franchise seeking to dip under the collective balance threshold, will ship Betts and starter David Price with money to cover half of the $96 million remaining on Price's contract to the Dodgers. The Red Sox will receive outfielder Alex Verdugo with two prospects who were not part of the original deal: shortstop Jeter Downs and catcher Connor Wong.

The original agreement would have triggered another trade between the Dodgers and Los Angeles Angels in which the Dodgers would have sent outfielder Joc Pederson and right-handed pitcher Ross Stripling to the Angels for infielder Luis Rengifo. Prospects would've also exchanged hands. But the deal reportedly isn't happening, giving the fiasco another odd twist.

The first variation of the three-way agreement involving the Dodgers and Red Sox, which was reported Tuesday, had the Minnesota Twins sending pitching prospect Brusdar Graterol to Boston and receiving Kenta Maeda from the Dodgers. But Boston backed out of the agreement after reviewing Graterol's medical records and sought more compensation.

The three clubs worked on an adjusted deal over the next several days but could not come to a three-way agreement. As a result, the Dodgers and Twins agreed on a separate deal not involving the Red Sox on Sunday. In it, Maeda will still go to Minnesota along with $10 million and a prospect, but Graderol would be sent to Los Angeles, not Boston, along with the No. 67 pick in June's draft and outfield prospect Luke Raley, whom the Dodgers drafted in 2016 and traded to the Twins in 2018. Both transactions are pending medical reviews.

Graterol, 21, underwent Tommy John surgery in 2015 and missed two months last season with a shoulder impingement. The Red Sox had planned to use him as a starter, but concluded he was better suited as a reliever after reviewing his records. The Dodgers apparently thought differently of Graterol's health record, or are at least fine with his 101-mph fastball coming out of their bullpen.

The original three-team swap sent shockwaves from coast to coast, exciting people in Los Angeles while peeving Boston's rabid fan base weeks after manager Alex Cora was forced to step down as part of the fallout from the Houston Astros' sign-stealing scandal.

The situation took a strange turn Wednesday when word surfaced that the Red Sox were backing out of the original transaction. By Friday, the delay had peeved Scott Boras, Graterol's agent, and MLBPA executive director Tony Clark enough that they publicly denounced the situation. Boras defended his client's health. Clark lambasted the process in a statement.

"The proposed trades between the Dodgers, Red Sox, Twins and Angels need to be resolved without further delay," Clark said. "The events of this last week have unfairly put several players' lives in a state of limbo. The unethical leaking of medical information as well as the perversion of the salary arbitration process serve as continued reminders that too often players are treated as commodities by those running the game."

The episode's delayed completion registers as a loud, if strange, finale to the offseason for the Dodgers after they whiffed in previous attempts to land an elite player.

They managed to acquire Betts, perhaps the best player in baseball not named Mike Trout, without giving up one of their top prospects, but relinquished more than in the initial deal.

Verdugo was the centerpiece all along. A former top prospect, the 23-year-old outfielder enjoyed some success in his first full major-league season in 2019, batting .294 with 12 home runs and 22 doubles while providing plus defense at all three outfield positions. But he arrived in Los Angeles with makeup concerns and ended the season on the injured list with oblique and back injuries.

Downs, 21, was traded to the Dodgers in the deal that sent veteran outfielders Matt Kemp and Yasiel Puig to Cincinnati after the 2018 season. Ranked the organization's sixth-best prospect by Baseball America, Downs batted .269 with 19 home runs, 23 steals, and an .862 on-base-plus-slugging percentage for Class-A Rancho Cucamonga. He closed the season with a 12-game stint at double-A Tulsa, where he hit .333 with five homers and 11 RBIs.

The 23-year-old Wong is regarded as the Dodgers' fourth-best catching prospect behind Will Smith, Keibert Ruiz, and Diego Cartaya, though he's also played other positions. He batted .281 with 24 home runs and an .878 OPS in 11 games between Rancho Cucamonga and Tulsa last season.

Betts will slot in atop the batting order to upgrade an already potent offense. Widely considered the best right fielder in the sport, he will stand next to center fielder Cody Bellinger, giving the Dodgers a superb defensive outfield.

He will enter free agency next winter — part of the reason the Red Sox traded him was they believed they didn't have a chance to keep him — but the Dodgers have the means to pay him and are intent on extending the marriage. He is expected to garner a contract close to the 12-year, $430 million deal Trout secured with the Angels.

Price isn't the elite pitcher he was a few years ago but he also isn't just a bridge to Betts. If healthy, the 34-year-old Price can bolster a rotation that lost fellow left-handers Hyun-Jin Ryu and Rich Hill in free agency.

The 2012 American League Cy Young Award winner, Price posted a 3.84 earned-run average in four seasons with the Red Sox. A move to the National League West, a division with more spacious parks in the league without a designated hitter, could boost his effectiveness.

It looks like the Boston Red Sox and Los Angeles Dodgers will have to find a new dance partner if they are to complete the Mookie Betts trade.

With Mookie Betts and Cody Bellinger, the Dodgers have the two best outfielders in the major leagues not named Mike Trout or Christian Yelich.

FILE - In this April 30, 2019, file photo, Boston Red Sox's Mookie Betts smiles as he crosses home plate on his solo home run off Oakland Athletics starting pitcher Aaron Brooks in the first inning of a baseball game at Fenway Park in Boston. Betts and the Red Sox agreed Friday, Jan. 10, 2020, to a $27 million contract, the largest one-year salary for an arbitration-eligible player. (AP Photo/Charles Krupa, File)

FILE - In this Aug. 10, 2019, file photo, Boston Red Sox's Mookie Betts hits an RBI-double during the sixth inning of a baseball game against the Los Angeles Angels in Boston. Betts has agreed to a $27 million contract with the Red Sox. It is the largest one-year salary for an arbitration-eligible player. (AP Photo/Michael Dwyer, File)