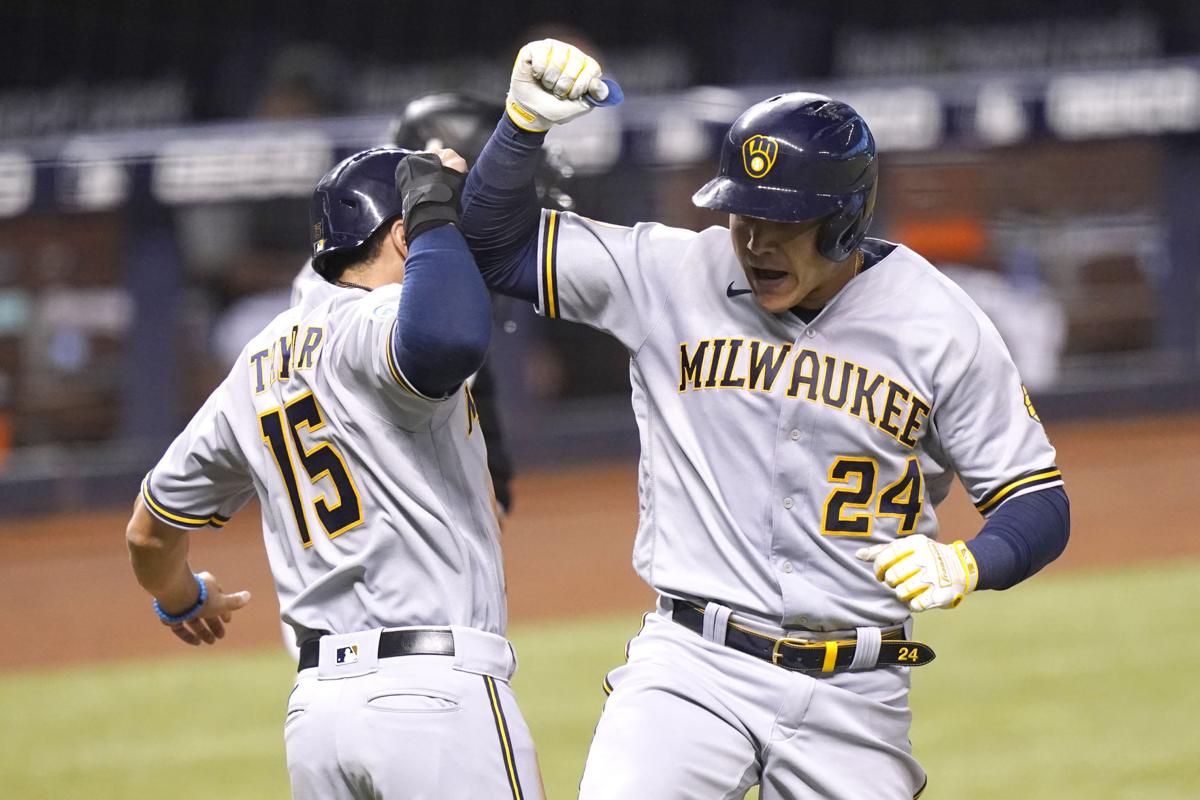 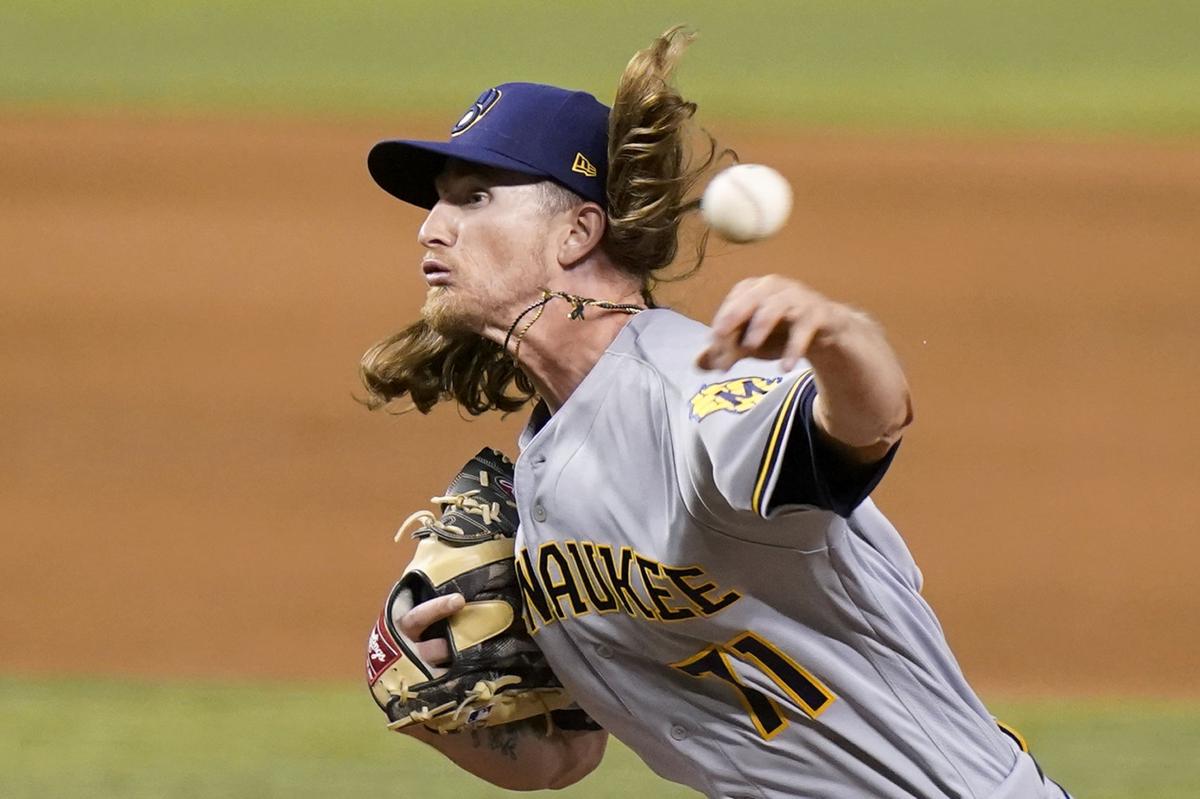 Brewers reliever allowed one hit and struck out the side in the ninth. He became the fastest pitcher to record 400 career strikeouts, accomplishing the feat in 234⅔ innings

MIAMI — Adrian Houser brought the heat on the mound and kept his cool circling the bases.

The veteran right-hander struck out 10 in six innings and homered off Daniel Castano for the second time this season, helping the Milwaukee Brewers snap a six-game losing streak by beating the Miami Marlins 6-2 Saturday.

Houser’s homer in the fourth inning raised his career average to .121 (4-for-33). He also homered against Castano when he beat Miami on April 27, and this time he didn’t want to let his excitement show.

“I was trying to keep the heart rate down and trying not to be as emotional as last time, trying to stay even keel and not have to catch my breath when I was going back out to the mound,” Houser said.

He’s the first pitcher to homer off the same pitcher in separate games in the same season since Bronson Arroyo did it against off Glendon Rusch in 2006.

Avisaíl García added his fourth home run for the Brewers, who improved to 1-5 on their seven-game trip. The losing streak was their longest since July 2018, and began when they led the NL Central.

“A big win,” Houser said. “We really needed it. Hopefully we can keep it going and get back to where we were.”

Miami had won four in a row. Marlins batters struck out 18 times and totaled only six hits.

Houser (3-3) allowed two runs while matching a career high in strikeouts. He became the 17th pitcher since 1900 to hit a home run, walk none and have at least 10 strikeouts in a game, and he’s the first Brewer to accomplish the feat.

“A great start from Adrian,” manager Craig Counsell said. “He was as good as we’ve seen.”

Although Houser was dominant, Miguel Rojas homered on his first pitch.

“Somehow Houser runs into another one,” Castano said.

“Completely unexpected,” Counsell said, “but it got the dugout fired up.”

Josh Hader, Milwaukee’s fourth pitcher, became the fastest to 400 strikeouts in major league history. He pitched around a single in the ninth and had three strikeouts to increase his career total to 402.

Afterward, Hader grinned as he held up a game ball.

“This is a special ball. It’s going to be going in the man cave,” he said. “There are a lot of guys who have played this game who are really great and I grew up watching. To break a record like that, it’s pretty special.”

Hader has 234⅔ career innings pitched. The previous record was 236 by Craig Kimbrel.

Marlins manager Don Mattingly, outspoken in his dislike of baseball’s trend toward less contact, isn’t surprised there have been four no-hitters already this season.

“There should be one every week, right?” he said. “We’ve built teams on the three-run homer or strikeout or walk, with not a lot of hits in between.”

Brewers right-hander Corbin Burnes, sidelined for an undisclosed reason, is expected to throw a bullpen session Monday and be activated next week. ... Catcher Manny Piña (left big toe) was reinstated from the 10-day injured list. ... Left-hander Brent Suter went on the bereavement list.

Left-hander Brett Anderson (2-2, 4.15 ERA), who has been sidelined with a strained right hamstring, is expected to start Sunday for the Brewers against righty Sandy Alcantara (1-2, 2.95). Alcantara earned his lone win of the season April 28 at Milwaukee, allowing two runs in seven innings.

Each and every year, president of baseball operations David Stearns and manager Craig Counsell are peppered with questions about a perceived surplus or logjam at one position or another and each and every time they're asked, both remind the intrepid reporters asking those questions that it is a long season, injuries happen and depth is a key to success for any team.

In the future, Stearns and Counsell can respond to those questions by referencing April 2021.

Since April 10, when second baseman Kolten Wong (above) went on the injured list with a strained oblique, the Brewers have put 10 players on the IL — including starting outfielders Lorenzo Cain and Christian Yelich, both of their starting catchers and two starting pitchers.

As a result, all but one of the players on Milwaukee's 40-man roster have been used so far this season.

"We talk about depth all the time," Stearns said. "We didn't anticipate needing to go through this many layers of depth this early. It's given a number of guys some really great opportunities and through all of their credits, they've taken advantage of them."

Anyone who's watched the team this year already knows this, but Milwaukee's rotation has been so good so far that it's worth repeating. Prior to Sunday, when Alec Bettinger's MLB debut (above) turned into a nightmare with a five-run first inning, the Brewers' starters combined for a 2.57 ERA, second only to the San Francisco Giants in all of baseball. After Bettinger's 11-run performance, Milwaukee's rotation still owns a 3.18, the fifth-best mark in the NL and sixth in MLB.

"Every guy that's in this in this rotation is bringing something and it's fun to watch just from a pitching standpoint," closer Josh Hader said. "It's impressive to see how they attack these lineups, especially going around lineups three times in a row. I know as a starter that's not an easy thing to do and they make it look easy."

On the other end of the spectrum, Milwaukee's offense is still a concern. The Brewers are last in the National League with a .217 batting average and .301 on-base percentage. Their 35 home runs are good for sixth in the NL and help boost their slugging percentage to .373 (11th/NL), while their .674 OPS ranks 13th.

Among qualified players (3.1 plate appearances per team games played), Avisail Garcia (above) is Milwaukee's leading hitter with a .222 average, just ahead of Travis Shaw, who's batting .220 but is among the league leaders in RBIs (21) and has a team-leading five home runs so far.

Still, the Brewers' bats have come through in big moments more often than not, and thanks to the pitchers' efforts, the offense hasn't had to put together too many big innings in order to dig out of a hole.

"We just keep doing it every night, finding ways to get it done," Shaw said. "Seems like however many runs we need, we score that exact amount every single night, whether it's one, whether it's five, six, whatever it is, we'll get it. We've been getting just enough to win."

THINGS AREN'T AS BAD AS THEY SEEM

Even with the injuries, the slumps, roster shuffles and their blow-up loss Sunday, the Brewers still woke up Monday atop the National League Central Division, a game up on second-place St. Louis and 3 1/2 ahead of the third-place Reds.

"You take three out of four from the Dodgers and you have to consider that a good series, for sure," Counsell said. "Guys continue to step up. It's going to take more than 26 (players) — I think we've made that pretty clear — and I think we're in that mode right now. It's a good place to be. We continue to pitch very well and I think that's going to continue to serve us well."

THIS TEAM COULD BE FOR REAL

No doubt, there is still way too much baseball left. A lot can happen between now and September and there's plenty of teams in franchise history that saw strong April starts wiped out by May swoons, but that the Brewers have been able to navigate this challenging stretch without losing ground while taking care of business against their divisional rivals is encouraging.

"We're really being tested right here in April, but we've come through better than I think anybody could expect," Shaw said. "Our pitching’s been unbelievable. Offensively, we’ve struggled but I don’t think that’ll be the case all year. But right now, our pitching is carrying this team and offensively we’re getting healthier and hopefully we’ll get swinging the bats a little better here as we get into May."

With a 5-4 loss at Philadelphia on Wednesday night, Milwaukee has lost four in a row, including three straight in Philadelphia.

Trailing 6-1, Milwaukee scored four runs in the seventh but come up short in a second straight loss in Philadelphia.

For the first time in more than a year, Minor League Baseball is back.

Brewers reliever allowed one hit and struck out the side in the ninth. He became the fastest pitcher to record 400 career strikeouts, accomplishing the feat in 234⅔ innings