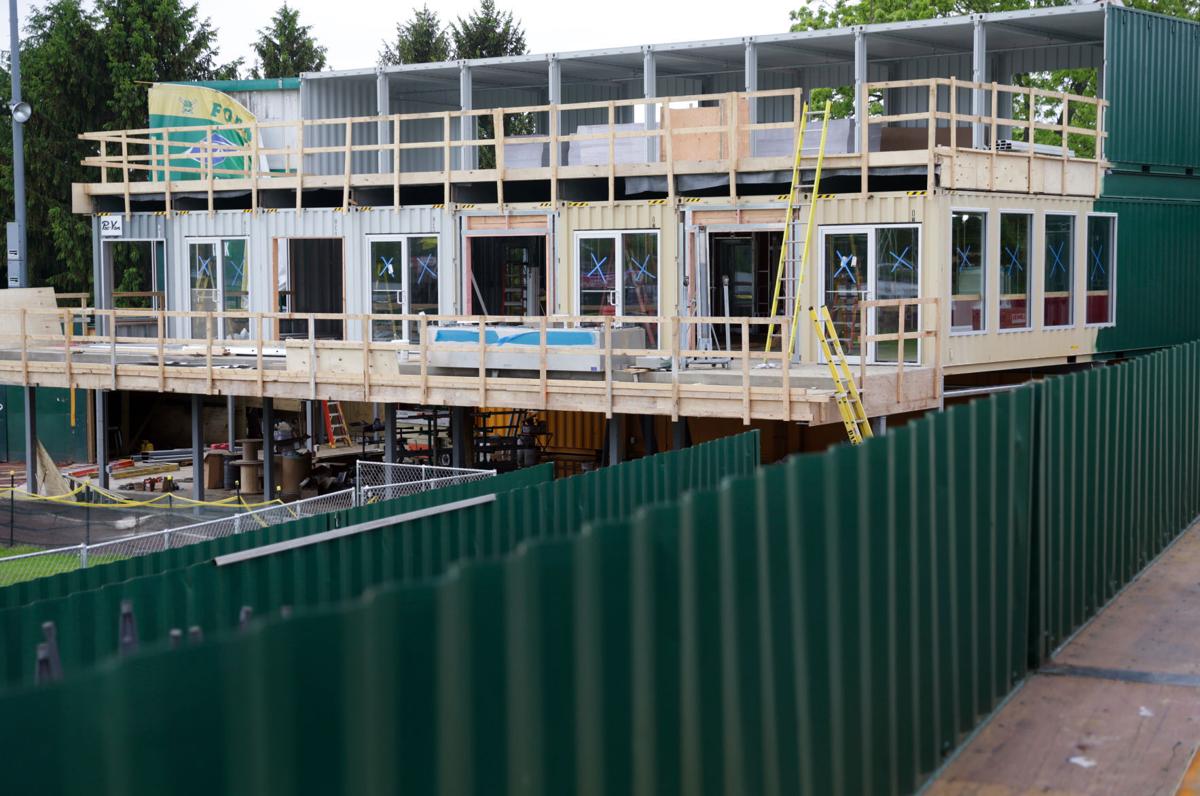 The new Duck Blind suites at Warner Park give the Madison Mallards an opportunity to sell high-end seating areas. The second level can be enclosed and temperature-controlled for year-round use. 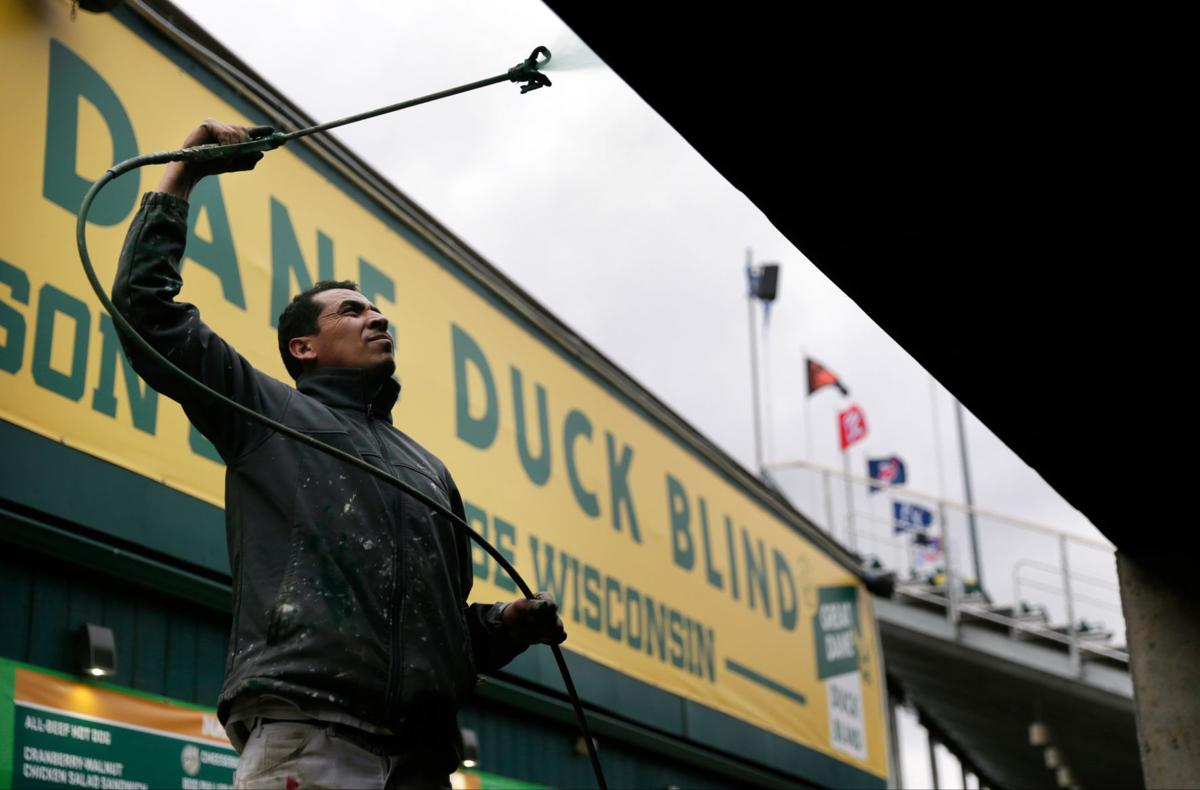 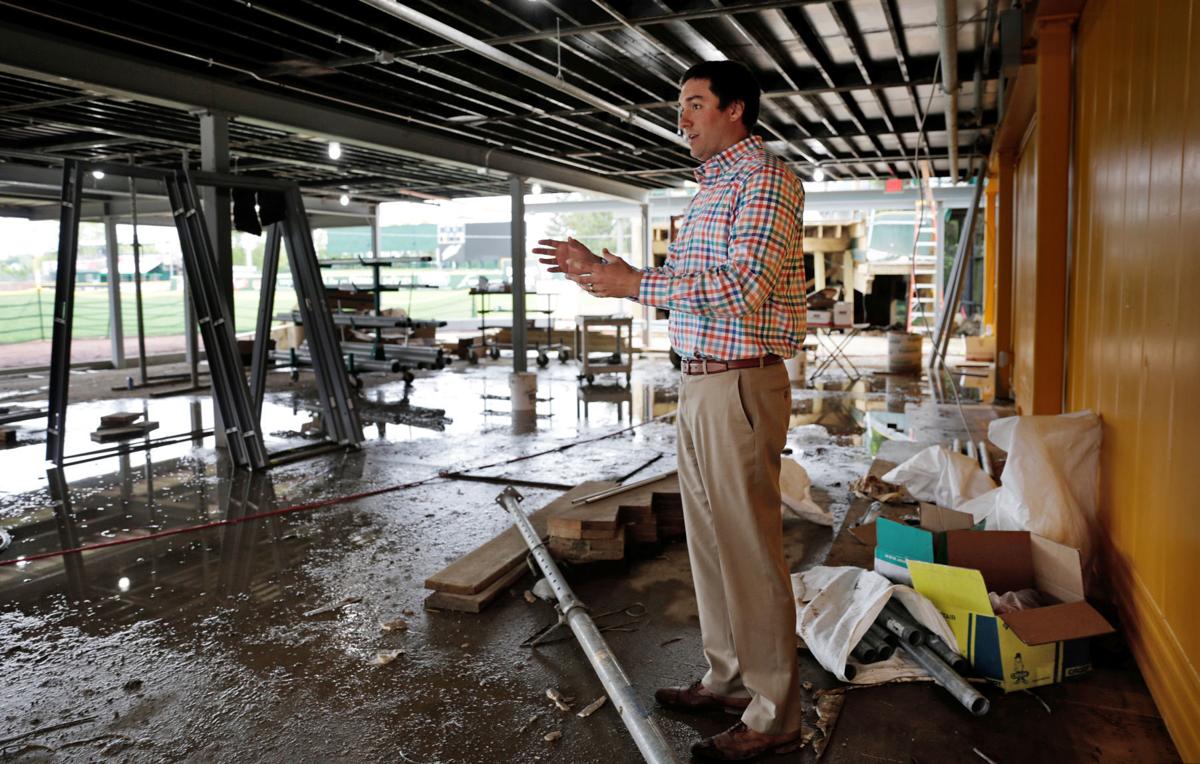 Madison Mallards general manager Tyler Isham stands where a bar will be installed in the field-level area of the Duck Blind suites. A screen will separate the area from the playing field, and two rows of suite seats will be available for general admission Duck Blind ticket-holders. 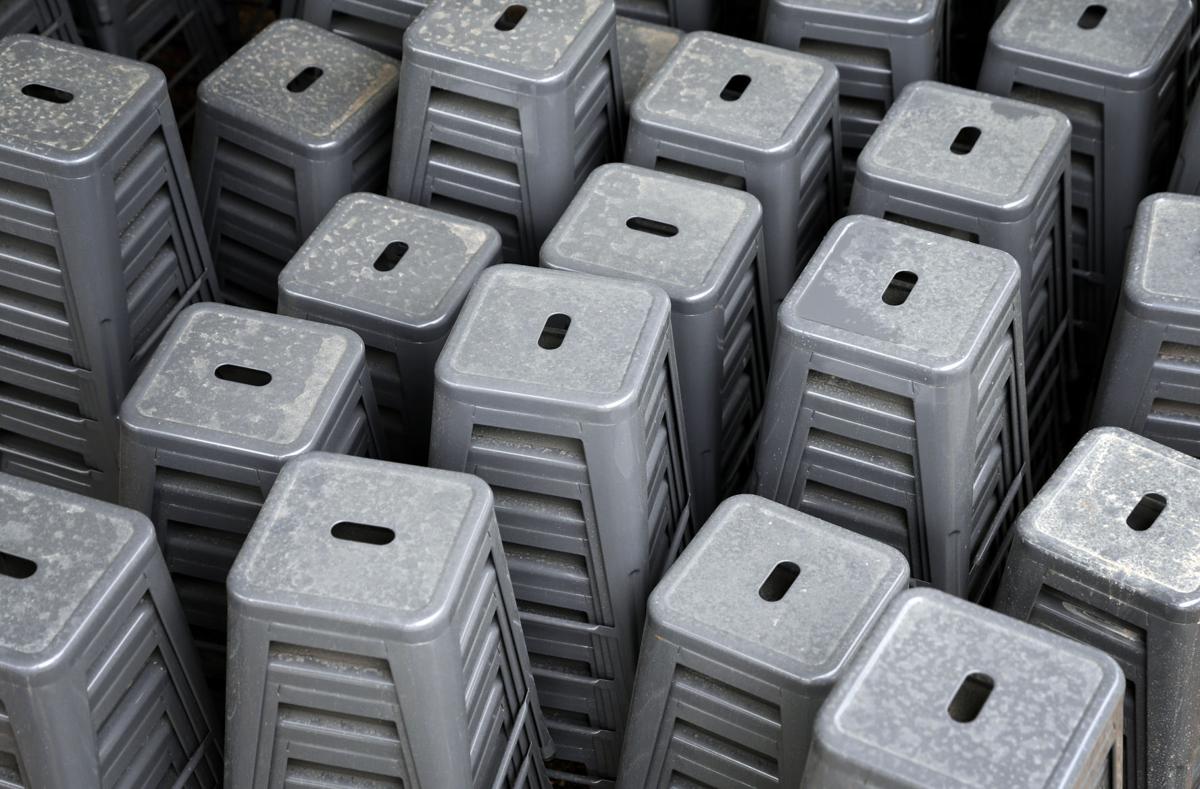 Dozens of barstools wait to be cleaned and set out for use in the renovated Duck Blind at Warner Park.

Ten years ago, weathered decking on the Madison Mallards’ signature all-you-can-drink spectator area probably would have been acceptable to the team’s executives.

The 14-year-old Great Dane Duck Blind structure down the right-field line at Warner Park, in disrepair after hosting thousands of fans, was no longer up to the standards of the team, president Vern Stenman said.

A $1 million rebuild set to open this week signals both a growing-up for the team’s expectations for itself and a shift in what it’s trying to deliver to fans.

The new Duck Blind was built with 37 recycled shipping containers, creating a four-level building beyond the right-field wall. In it are 12 suites to accommodate anywhere from 20 to 50 people each, or larger groups when walls between the units are removed to combine spaces.

The general admission areas of the Duck Blind also have been transformed, with multiple levels in the right-field corner that the team hopes will provide a seat for everyone and better views of the game.

“The beauty of the Duck Blind for me is that, reflective of the Mallards mission, it’s very versatile,” Stenman said. “So the space we’re building, it doesn’t ignore anyone. It’s got something for that high-end corporate person, yes. But if you want to come out with a group of friends, it’s going to make that experience a lot better.”

It’s another large step for a team that seems to have a never-ending list of ways to tinker with the home it calls the Duck Pond. The Mallards’ 17th season in the Northwoods League opens Tuesday night with a home game against the Fond du Lac Dock Spiders.

The truth, Stenman said, is there’s never been a true master plan for the stadium. Many offseason improvements have been in response to needs that have arisen, not a long view.

This season’s work brings the Duck Blind, which has been a driver of the team’s success at the turnstiles, up to par with other areas of the ballpark that have received major attention in the past six years.

The Duck Blind started small in 2001, when the Mallards took over as the Warner Park stadium’s baseball tenant. It was largely a leftover from the last team that played there, the Northern League’s Madison Black Wolf.

“It was a tiny, little deck, maybe 1,000 square feet,” Stenman said. “But we branded it as the Great Dane Duck Blind in year one and started hosting parties out there.”

The team added to the area starting in 2003, shortening the playing field in right to pull fans closer to the game and adding some seating over the years.

The idea stayed the same: A Duck Blind ticket got the holder as much food and drink as he or she cared to enjoy. Stenman proudly points out that the team’s partnership with the Great Dane Brewing Pub & Brewing Co. brought craft beer to the ballpark before that was trendy around baseball.

The rest of the ballpark then took the focus of the Mallards’ offseason improvements. In 2011, a $1.8 million project rebuilt most of the seating bowl, with stadium seats replacing bleachers.

A year later, the team added a grass berm beyond the left-field fence and the two-tiered Duck Blind Club with picnic tables as an extension in right.

“What happened is everything else started being nicer than the Duck Blind was,” Stenman said. “And the Duck Blind was starting to fall apart. It was basically a residential-style construction wood deck. It was showing its wear and tear and its age.”

Not to mention that it never had great sight lines to the action on the field and that up to half of the ticket buyers in the general admission area didn’t have a place to sit.

They didn’t have to build a new one for people to come — the Duck Blind frequently sold out for Friday and Saturday games, Stenman said, and for most Thursdays.

Overall, average announced attendance has been more than 6,000 in nine of the last 11 seasons, the highest by far in summer collegiate baseball. The stadium capacity for baseball has been 6,750 since 2010.

The Mallards decided to upgrade the Duck Blind because their vision has changed.

“Over the last two years, we’ve kind of come to the consensus internally that it wasn’t up to our standards anymore,” Stenman said.

The enhancements, which the team was racing to complete last week, include 20 more beer lines to help cut down wait times.

One level of the suites is able to be enclosed and temperature-controlled, allowing it to be used year round.

The team hired a sous chef, Matt Phelps, formerly of Graze, to work with executive chef Tristan Straub on expanding the food offerings at both Warner Park and Breese Stevens Field, which the Mallards’ parent company, Big Top Baseball, manages.

In the design process, the Mallards’ sales staff suggested that more high-end spaces would be welcome. The suites in left field completely sold out last season, Stenman said, and club seating along the third-base line was 97 percent sold.

“The big thing that we were hearing in the community was that the only time that people said no was because they said it wasn’t quite nice enough for them to bring clients to,” Mallards general manager Tyler Isham said. “So that was one of our motivations to build this indoor space, so we couldn’t get that ‘no’ anymore.”

The second and third levels of the suites structure offer covered and uncovered areas. The fourth floor is a rooftop view with an awning. Per-person prices in the suites range from $65 to $75.

The field level below the suites features a bar for general admission Duck Blind ticket holders — the team now has an expanded liquor license to sell wine — as well as a familiar twist on seating for the team.

For the 2011 seating bowl rebuild, the team bought stadium seats once used at Baltimore’s Oriole Park at Camden Yards. In the new Duck Blind, the Mallards are installing behind the right field screen 88 suite chairs removed from Vivint Smart Home Arena in Salt Lake City as first-come, first-served seating.

General admission Duck Blind tickets are $25 with soda and $34 for beer; prices climb to $32 and $41, respectively, on Fridays and Saturdays.

Stenman said the Mallards recognized that Madison’s summer entertainment scene is changing, and the rebuild is the team’s effort to keep up.

“As our company becomes more mature and continues to hopefully be a fun part of the summer in Madison, the expectations of us are increasing. We want to meet those expectations, and we think that this investment is going to accomplish that.”

The Madison Mallards played long ball more than anyone else in the Northwoods League over the past two seasons.

KALAMAZOO, Mich. — Doran Turchin continued his recent power surge, helping the Madison Mallards to a 12-6 victory over the Kalamazoo Growlers …

Mallards: Strong start wasted as Growlers get hot in eighth

Despite getting seven scoreless innings from starter Simon Rosenblum-Larson, the Madison Mallards failed to close out the Kalamazoo Growlers on the road Tuesday afternoon, falling 3-2 at Homer Stryker Field.

Madison rallied for three runs in the eighth inning to tie the score, but the Wisconsin Woodchucks responded with a run in the top of the nint…

Jeffery Mitchell Jr. doubled and drove in four runs to help spark the Madison Mallards to a 13-5 drubbing of the Kalamazoo Growlers in a North…

Mallards: Young group opens the season with development in mind

The Mallards host the Fond du Lac Dock Spiders, a newcomer to the Northwoods League, in Tuesday's opener.

The Madison Mallards’ Northwoods League amateur baseball game at Wisconsin Rapids on Monday night was postponed due to rain and rescheduled.

The new Duck Blind suites at Warner Park give the Madison Mallards an opportunity to sell high-end seating areas. The second level can be enclosed and temperature-controlled for year-round use.

Madison Mallards general manager Tyler Isham stands where a bar will be installed in the field-level area of the Duck Blind suites. A screen will separate the area from the playing field, and two rows of suite seats will be available for general admission Duck Blind ticket-holders.

Dozens of barstools wait to be cleaned and set out for use in the renovated Duck Blind at Warner Park.