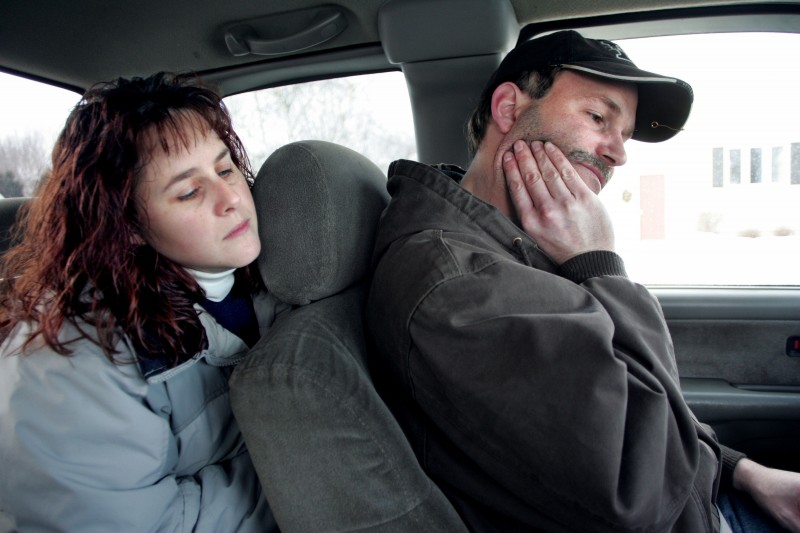 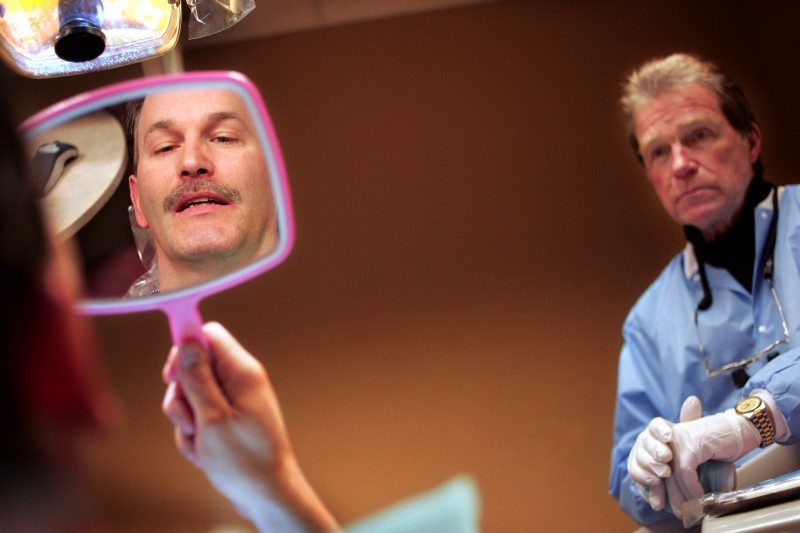 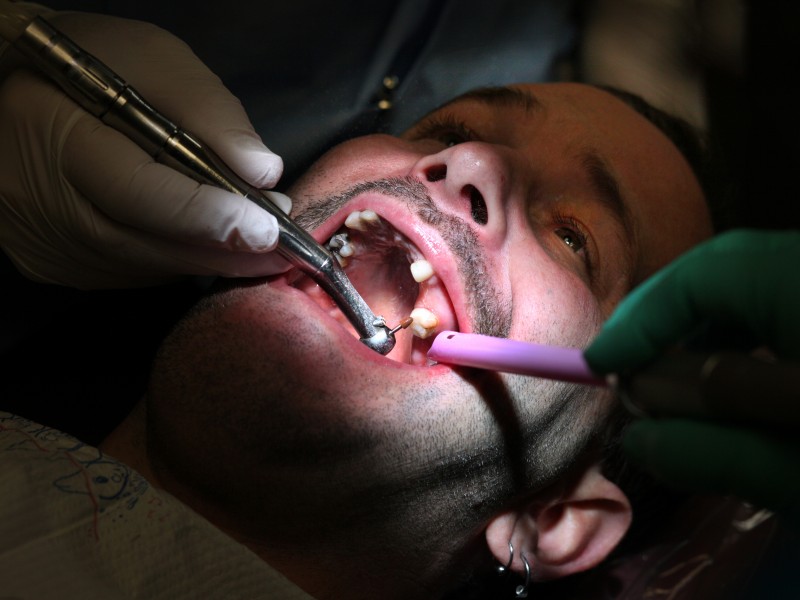 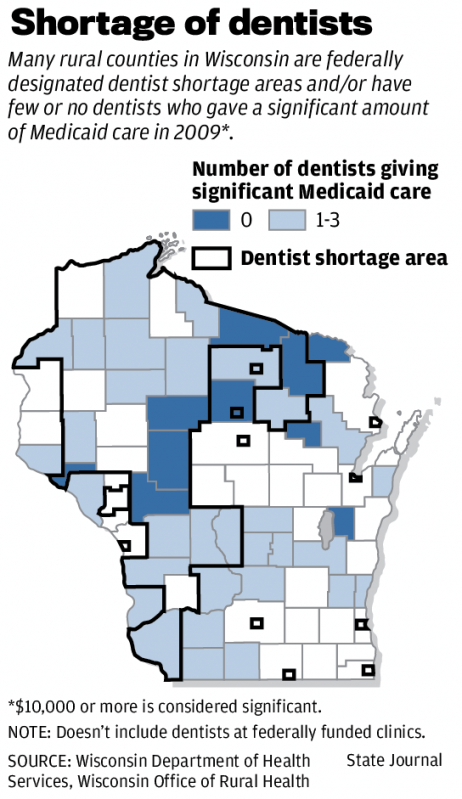 When Rob Homerding's teeth started to crumble and ache, he tried to find a dentist who would take Medicaid.

He and his wife called 20 dentists around Monroe, where they live, but no one would treat him. By the time he saw a dentist two years later, a dozen teeth had to be pulled.

His daughter's friends made fun of his gap-ridden mouth. He stopped smiling.

"It probably wouldn't have gotten this bad if I had found a dentist earlier," said Homerding, 38, a butcher in New Glarus.

Dental care can be difficult to find in rural parts of Wisconsin and throughout the country - especially for people on Medicaid, the state-federal health plan for the poor, and those with no insurance.

Nine of 10 dentists in the state accept few or no Medicaid patients, mostly because they say the state pays too little for the care. Rural areas have only about half as many dentists per person as urban areas do, making the search for dental care even harder in small towns.

"Of all of the holes (in health care), dental care is the biggest and the deepest," said Greg Nycz, executive director of the Family Health Center of Marshfield, which serves much of rural, northern Wisconsin.

A network of federally funded dental clinics has emerged around the state to serve Medicaid patients and the uninsured, but many of the clinics have been overwhelmed by demand.

The clinic in Darlington, where Homerding eventually was treated, had 400 patients on the waiting list when it opened a year ago. Many of them haven't seen a dentist in years and need multiple teeth pulled, said Dr. Bob Traul, one of the clinic's three dentists.

"Most of these patients are a year-long project," Traul said. "It's going to take a while to get them all back."

Wisconsin, which ranks high in national studies of health care quality, gets poor marks in access to dental care.

The lack of dental care among Medicaid patients is worst in the southeastern part of the state, which is mostly urban. But the challenge also is significant in rural areas. The 10 counties without any private dentist who provided a significant amount of Medicaid care last year are rural: Calumet, Clark, Florence, Forest, Jackson, Lincoln, Menominee, Pepin, Taylor and Vilas.

"It's our No. 1 access challenge" for those on Medicaid, said Karen Timberlake, secretary of the state Department of Health Services. BadgerCare Plus and other Medicaid programs cover 1.1 million people in Wisconsin, or one in five residents.

Many dentists say the main problem in treating Medicaid patients is that the state doesn't pay enough.

The program pays dentists about 40 percent of their fees, while private insurers generally pay twice that. Overhead costs eat up about 60 percent of fees, dentists say.

"When we see someone on Medicaid, we lose money," said Dr. Kent Vandehaar, a dentist in Chippewa Falls who is president of the Wisconsin Dental Association. "We can only afford to do that so much."

Most states pay dentists more to treat Medicaid patients than Wisconsin does, according to a report this year from the Pew Center for the States. Timberlake said the state, which cut programs to plug a $6 billion budget shortfall, can't afford to pay dentists more.

The coverage gap can take a toll on health-care expenses overall. More than 32,000 emergency room visits in the state last year were for dental problems, costing close to $7 million, according to the Wisconsin Hospital Association. Nearly all of those visits were preventable, said Dr. Warren LeMay, chief dental officer for the state Department of Health Services.

Support from Congress and the Bush and Obama administrations significantly increased the federal budget for the centers in recent years, with another boost coming from the new health care overhaul.

Wisconsin has 25 of the clinics, up from 10 just six years ago. Plans call for the number of clinics to more than double again within 10 years.

The clinics get roughly 70 percent to 80 percent of their fees for Medicaid patients, meaning they can make some money by delivering that care. They also accept people without insurance, on a sliding-fee scale.

The clinics' higher Medicaid payments "allow us to meet the need," said Richard Perry, chief executive officer of the Beloit Area Community Health Center. The center opened the dental clinic last May in rural Darlington, about 65 miles southwest of Madison.

Dr. Julio Rodriguez, a private dentist in Brodhead, a small town south of Madison, called the payments to the federally funded dental clinics "a double standard."

Rodriguez said the government should pay dentists like him more to care for Medicaid patients instead. "Why can't we get the same reimbursements?" he asked.

Homerding said the Darlington clinic helped him when no one else would.

His dental problems started 10 years ago when he was eating a dry sausage and part of a front tooth fell off. He paid $600 out of pocket for a root canal and crown.

Four years ago, two of his molars were pulled because one was infected and the other decayed. He's still paying the $500 bill.

The meat market where he works doesn't offer dental or health insurance. His wife, Karen, lost her job with health insurance at a grocery store a few years ago. She works as a housekeeper at a New Glarus hotel, which doesn't provide insurance. They and their 9-year-old daughter, Kaylee, are on BadgerCare Plus.

Homerding said his family has a history of soft teeth. But he admits to drinking up to 12 cans of Pepsi a day before cutting back recently to two. That kind of sugar overload is common among rural patients with tooth decay, said Traul, the dentist in Darlington.

More of Homerding's teeth started breaking off three years ago, but he couldn't find a dentist who would see him. Of the 20 dentists he and Karen contacted, just one agreed to give him an appointment. But "he took one look at me, said, ‘I can't help you,' and walked out the door,'" Homerding said.

By the time he got to Traul last May, nearly half of his teeth had deteriorated into tiny gray chunks, including most of his front teeth. He had a hard time eating meat, nuts, chips and other foods. His mouth frequently hurt. Normally outgoing, he became reclusive.

His daughter's friends don't make fun of him anymore, and his attitude has become more positive.

In access for Medicaid recipients: Wisconsin ranks fourth to last in the percentage of Medicaid patients who receive dental care, according to the U.S. Department of Health and Human Services. Just 23 percent of the state's enrollees got dental care in 2008. Only Delaware, Florida and Kentucky fared worse.

In access for children: Wisconsin was among 20 states that received a grade of "C" this year in a Pew Center for the States report on dental care for children. The report said the state failed to meet four of eight benchmarks, specifically saying the state:

• Treats too few children on Medicaid.

• Puts protective sealants on the teeth of too few high-risk students.

• Hasn't authorized new kinds of dental providers, which could improve access to care.

Out of Reach: The rural health care gap

The project is partly supported by the nonprofit, nonpartisan Kaiser Family Foundation, which awarded a fellowship to Wahlberg.

Dentists shouldn’t be out of reach in rural Wisconsin.

Dental care, "the biggest and deepest" hole in health care, can be hard to find in rural Wisconsin.

Read more from our ongoing series "Out of Reach: The rural health care gap"

Dental clinics run by federally qualified health centers that take patients on Medicaid, with private insurance and without insurance in Wisconsin.

Dr. Chuck Wetzel, a dentist in Elcho, a small town northeast of Wausau, saw Medicaid patients for 35 years - until January.

Would another dental school help?

Rural students would learn to become dentists in rural settings and then treat rural patients who have a hard time finding dental care. That is Greg Nycz's vision for a second dental school in Wisconsin - in Marshfield, where Nycz directs the Family Health Center, which serves many rural counties.

Nearly half of rural adults in Wisconsin have lost teeth from decay, compared to just over a third of urban adults.

Sealants, thin coatings that can prevent food and germs from getting into gaps in molars, are one of the state's main weapons against tooth decay, especially for children who don't regularly see a dentist.

Minnesota became the first state to authorize dental therapists last year, though some of the workers have visited tribal lands in Alaska since 2003. Many countries have used them for years.

Health centers that have dental clinics for the underserved in Wisconsin.

About the rural health project