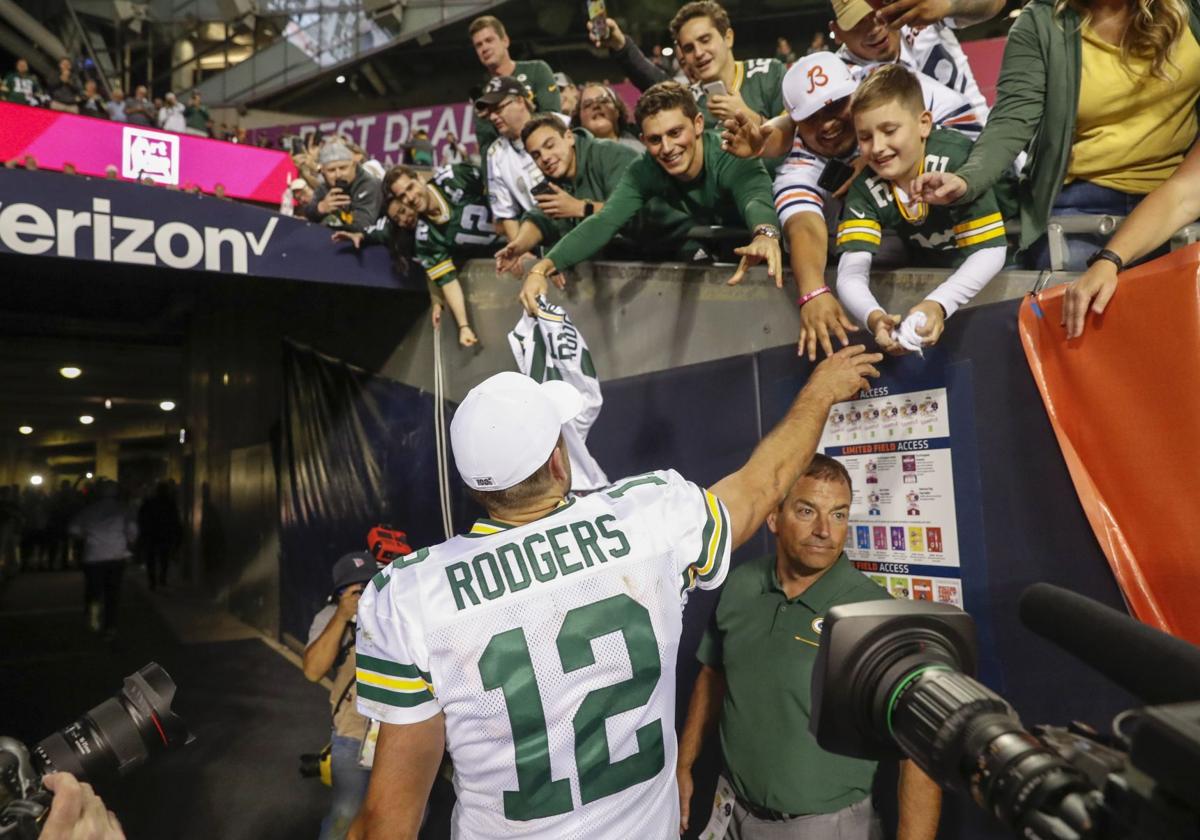 Aaron Rodgers high fives fans as he leaves the field after a 10-3 victory against the Bears on Sept. 5, 2019, in Chicago. 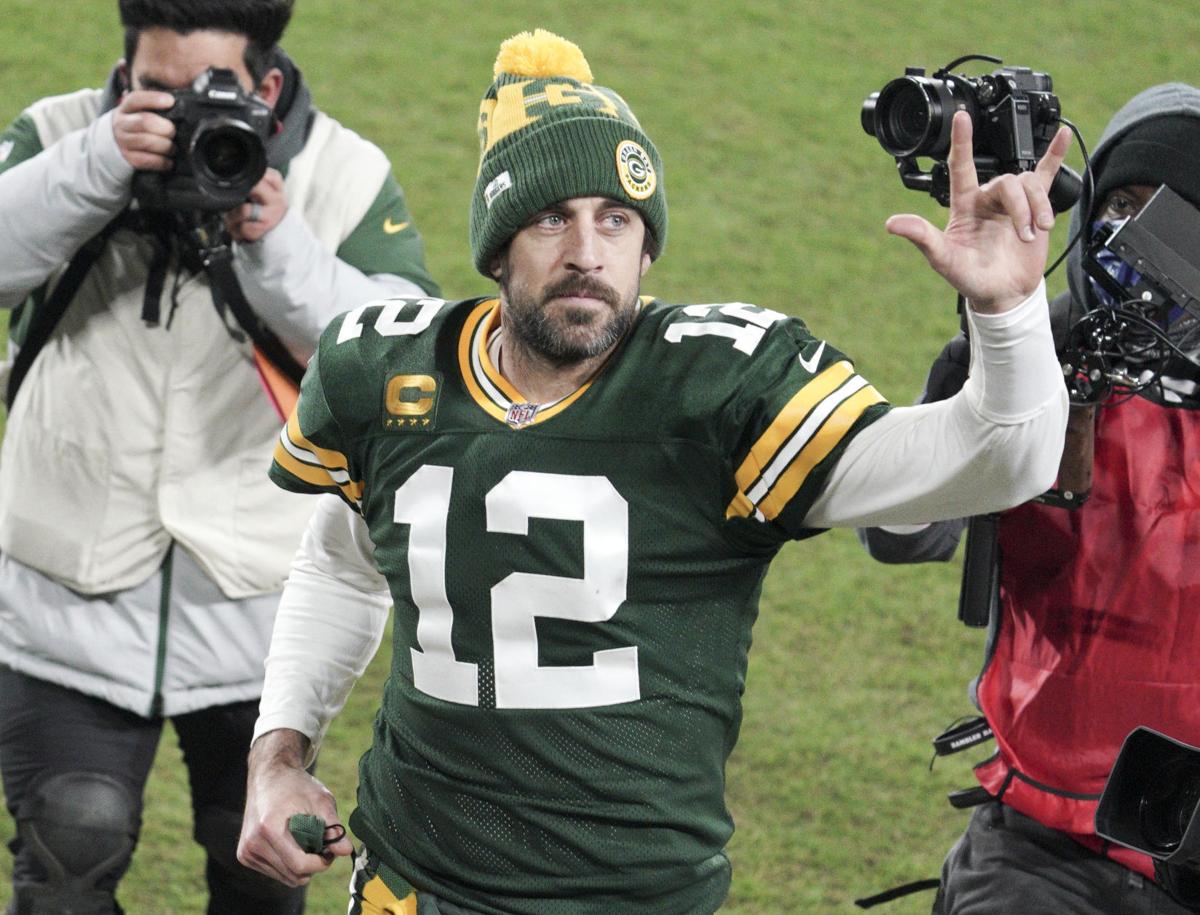 Quarterback Aaron Rodgers leaves the field after the Packers' 32-18 victory over the Los Angeles Rams in a NFC playoff game on Jan. 16 at Lambeau Field.

There’s a clear winner in the saga pitting Green Bay Packers star Aaron Rodgers against team management that, while not over, appears to have been put on hold for the time being.

Neither Rodgers nor the front office trio of team president Mark Murphy, general manager Brian Gutekunst and executive vice president/director of football operations Russ Ball can raise their arms in victory, at least not until we know more details about the compromise that led to the veteran quarterback reporting to Lambeau Field a little before 8:30 a.m. Tuesday for the start of training camp. The same can’t be said for a third party that for almost three months was forced to watch this mess play out while having no control in the matter.

So rejoice, Cheeseheads, and enjoy this season for all it’s worth because this standoff very well could resurface in early 2022. Place those concerns on the backburner for now because Rodgers under center once again makes the Packers a title contender.

Even the most optimistic of fans had to admit the Packers had no chance of winning the Super Bowl without him — they couldn’t even get over the hump in the NFC Championship Game the past two seasons with him at quarterback — and probably would have struggled to even make the playoffs.

The team now doesn’t have to rush Jordan Love into the lineup. Team officials have acknowledged Love, who didn’t suit up last season after the Packers’ shocking move to trade up and select him with the 26th overall pick in the 2020 NFL draft, isn’t ready to start. Perhaps he will be after a normal season of development in which he can get a ton of reps in practice and exhibition games during training camp before settling into a role as Rodgers’ primary backup.

Barring injury, Love won’t have to play a meaningful snap in 2021 and the team can use the next six months to evaluate whether he’s as good a prospect as it projected him to be.

While he deserves credit for not flinching while playing a game of chicken with Rodgers, it’s too early for Gutekunst to be doing any victory laps. He’s still the guy who ticked off Rodgers by drafting his successor and not giving the three-time NFL MVP a heads-up that the move was coming, an unforced error that left a franchise quarterback questioning his future with the team.

It’ll be Gutekunst who pays the price if Rodgers eventually leaves without adding a second Super Bowl title to his resume in Green Bay and Love turns out to be a bust.

As for Rodgers, it’s unclear exactly what he believed he could accomplish this offseason. If forcing his way out of Titletown was the goal, that seemed like an unlikely scenario all along; it made no sense for the Packers to trade Rodgers because it had all the leverage with Rodgers under contract for three more seasons.

Reports indicate the final year (2023) of Rodgers’ four-year, $134 million deal with the Packers will be voided as part of an altered contract, which gives him more control of his future. But that was hardly a deal-breaker for the Packers because it still leaves the organization in position to get a decent haul for Rodgers in a trade next offseason.

It’s hard to imagine another team committing to a trade for Rodgers without working out a long-term deal with him, so the veteran quarterback could play hardball and refuse to negotiate if he doesn’t find the landing spot of his liking. Even then, however, he’s still under contract with the Packers through the end of the 2022 season and they could be selective about where they send Rodgers.

Perhaps a concession on the Packers’ part will be to let Rodgers have more say in personnel decisions, which could open the door for Randall Cobb to return to Green Bay. Maybe this ordeal even forced Murphy and Co. to take a long, hard look in the mirror and do what they can to improve an organizational culture their best player apparently believes is fractured. Those would be wins in the Rodgers ledger.

Sitting out this season to get his way would have forced Rodgers into a position in which he was incurring massive fines while time slipped away, the reigning MVP sitting, watching and waiting at the age of 37. That never seemed like a logical scenario, either, though it couldn’t be ruled out because Rodgers is as stubborn as he is talented.

Rodgers in the end decided not to use the nuclear option. He’s back for at least one more season and any fans that are upset with him surely will forgive him if he has another season like 2020.

And that’s the key here: The potential of all of this drama carrying over into this season would be worrisome if it was anyone else in the middle of it. But this is Rodgers, who time and again during his career has used chips on his shoulder to spur greatness and likely will take this latest drama out on the rest of the NFL even though his anger is directed at the Packers’ front office.

So sit back and enjoy it, Packers fans. It’s the first big win of the 2021 season.

With an altered contract in the works and a bit more control of his future, Aaron Rodgers set to report to training camp

According to multiple sources, following conversations over the weekend between Rodgers’ representatives and the team, the sides had made enough progress on an altered contract for Rodgers — one that would apparently give him a modicum of control back over his future — to end his stalemate with the team and come to camp after missing all of the offseason program.

Aaron Rodgers high fives fans as he leaves the field after a 10-3 victory against the Bears on Sept. 5, 2019, in Chicago.

Quarterback Aaron Rodgers leaves the field after the Packers' 32-18 victory over the Los Angeles Rams in a NFC playoff game on Jan. 16 at Lambeau Field.