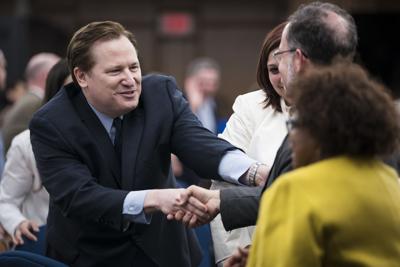 Madison merchants "overwhelmingly support the campaign to turn State Street into a promenade," according to the city's longest serving and most popular alderman. "There absolutely is widespread support."

Ald. Mike Verveer, who has represented Downtown Madison on the City Council for 26 years, tells Milfred and Hands on this week's episode of the "Center Stage" political podcast that many of his Downtown constituents are excited, too, about making "the state's most famous and illustrious street" into a walking mall without buses, similar to the Pearl Street Mall in Boulder, Colorado.

"Just as we closed State Street to all traffic on weekends last summer, I think we need to do the same this summer," Verveer tells our political podcaster.

Give pedestrian mall a try this summer on State Street

The city should "seriously consider" keeping all buses, cabs and emergency vehicles off the 400, 500 and 600 blocks of State Street on weekends this summer, Verveer says. General traffic has been forbidden from the street for decades.

If removing the buses works well this summer and is supported by the public, the city could pursue federal money and potentially create a special tax district to draw revenue from new development on State Street to create a park on State Street with public art, cafes and greenery in the area that buses now dominate.

“We have to be very creative and think outside the box and try to figure out ways to get to ‘yes’ and make this work,” Verveer says of offering more room for pedestrians, cafes and shops outside on State during summer weekends this year.

COVID-19 has made this the perfect time to create more public spaces outside, where the virus is less likely to spread. State Street also is hurting because of rioting last year.

Milfred and Hands reject the suggestion by city transportation officials that turning State Street into a true pedestrian mall conflicts with bus rapid transit, the mayor's proposal for faster bus service. Buses could still stop at the cross streets of State Street to pick people up, and on the Capitol Square. Moreover, a trial of a pedestrian mall could occur at the bottom end of State Street this summer, where the fast buses aren't going to go anyway.

Verveer credits the State Journal editorial board for encouraging the city to think big about State Street's future. Milfred discusses his conversation with the city fire marshal, who is open to the idea of creating a grand walkway along State Street that caters to people, rather than buses.

“Center Stage, with Milfred and Hands” is the State Journal’s weekly podcast from the sensible center of Wisconsin politics. It features Scott Milfred, the newspaper’s editorial page editor, and Phil Hands, the State Journal's political cartoonist.

Find and follow “Center Stage, with Milfred and Hands” on Apple Podcasts, iTunes, Stitcher, Google Podcasts, Spotify or your favorite podcasting app.at: go.madison.com/CenterStage. You also can listen to past episodes of "Center Stage" and see the podcast's webpage by clicking here.

The days are numbered for southern Wisconsin’s snowpack as after a chilly weekend, highs could reach 60 next week for the first time since November, according to forecasters.