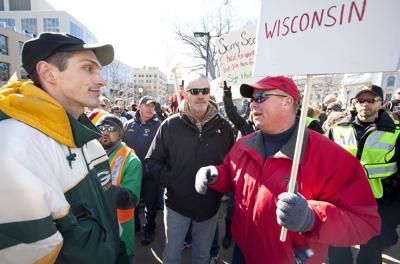 On the 10th anniversary of former Gov. Scott Walker's strict limits on public sector unions in Wisconsin, Milfred and Hands talk about Act 10 with the one Republican senator who voted against it a decade ago.

Dale Schultz, of Richland Center, once the GOP’s majority leader in the Senate, still faults his political party for the deep division it created across the state.

"I feel sad about neighbor fighting neighbor -- the refusal to talk to people, (to) sit in certain places in church, or at Rotary clubs or civic clubs, because of where people were on that issue and how it divides us," Schultz says.

He tells our political podcasters on this week's episode of "Center Stage, with Milfred and Hands" that savings were needed to fix a deep state budget deficit in 2011, and public employees had to contribute more for their benefits. But Walker was wrong to spring his dramatic changes on the public without giving any ground or trying to build broader support, according to Schultz.

"I think it hit so violently, so fast, that many, many people were just stunned," Schultz says. When protests erupted, "My colleagues were like deer in the headlights, wanting to go pray," the former senator says. "My own sense was God wasn't necessarily on our side."

The State Journal editorial board offered its view of Act 10 in Sunday's editorial, "Act 10 fight a dark time with mixed results."

“Center Stage, with Milfred and Hands” is the State Journal’s weekly podcast from the sensible center of Wisconsin politics. It features Scott Milfred, the newspaper’s editorial page editor, and Phil Hands, the State Journal's political cartoonist.

Find and follow “Center Stage, with Milfred and Hands” on Apple Podcasts, iTunes, Stitcher, Google Podcasts, Spotify or your favorite podcasting app.at: go.madison.com/CenterStage. You also can listen to past episodes of "Center Stage" and see the podcast's webpage by clicking here.

I attended every Act 10 protest. I was 78 years old, a retired teacher with 36 years in the Madison school system, and an avid member of my te…

My husband and children headed to the Capitol to support the teachers during the Act 10 protests a decade ago.

Ten years ago, during the height of the Act 10 protests and a cold snap like the one we are having now, I had gone skiing in a state park.

Act 10 was just a union-busting tactic inspired by the American Legislative Exchange Council and implemented by its puppet Gov. Scott Walker.

As someone who participated over 20 times in 2011’s protests against Act 10, I saw no violence, no guns, no flags other than United States or …

The State Journal's recent article on the 10th anniversary of Act 10 states that former Gov. Scott Walker “said he saw some similarities betwe…

My mother was a teacher. My in-laws were both teachers. I have taught high schoolers both here in Dane County and in Panama, and a loved one i…

While it is well-known that Act 10 restricted bargaining rights for state employees, less known is that union activity was banned at UW Hospit…

I was a teacher with about eight years of experience at the time of Act 10. I loved my job.

I was at the state Capitol in Madison a half dozen times during the Act 10 protests. It was inspiring to see people from across Wisconsin.

In February of 2011, Republican Gov. Scott Walker introduced the legislation known as Act 10, hoping for swift passage of the bill through the…

Walker might not be done with state -- Rob Slamka

I'm an activist who has followed through on the trail of how Act 10 happened. As a sheet metal worker in Local 18, I discovered that some buil…

See the whole series: The Great Divide: 10 years since Act 10

A decade later, the Wisconsin State Journal looks back at the historic debate and protests over the controversial anti-union law known as Act 10.