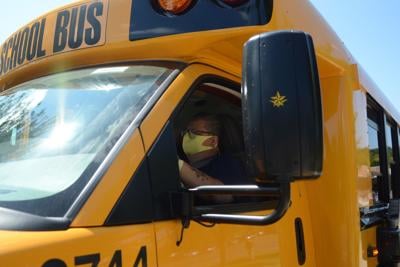 Masks in school? Sure. Mandatory vaccines for teachers. You bet.

Schools across Wisconsin should do whatever is necessary to keep classes open and safe this fall.

On their latest episode of "Center Stage, with Milfred and Hands" -- click the play button above to listen -- our political podcasters urge school officials not to panic at the first outbreak of a COVID variant.

Milfred and Hands celebrate the return to five full days of classes a week in the Madison School District and elsewhere across most of Wisconsin. Following a lost year of learning during the pandemic last year, schools must take precautions to keep the schoolhouse doors open. Students, staff and visitors should mask up inside school buildings, as the Centers for Disease Control and Prevention recommends. Districts also should require teachers to be vaccinated.

Teachers are essential workers, after all, in close contact with the only population that isn't yet eligible for shots -- kids younger than 12. Though more contagious strains of COVID are concerning, none of Wisconsin's more than 7,600 deaths from COVID were younger than 10. And only three were younger than 20.

So Madison School District shouldn't overreact -- something it's done in the past -- if cases rise in some school buildings. At the same time, rural schools with more conservative leaders shouldn't ignore responsible science-based precautions.

"The areas that need the restrictions most aren't getting them, and vice versa," Milfred says.

Hands predicts YouTube and Fortnite will be the biggest losers as school returns because kids will have to pay attention in class, rather than sitting on their phones at home.

Madison's liberal political establishment often scolds Republicans for failing to follow the science, and often that's justified. But Madison has it's blind spots, too.

"There were months and months where (Dr. Anthony) Fauci was saying the kids need to be in school, and Madison didn't have kids in schools," Milfred says. "So we ignore the science here in Madison sometimes, too."

Milfred and Hands have faith that front-line teachers will do the hard work of teaching as the pandemic continues. But unlike much of Europe and more conservative areas of America, progressive communities such as Madison failed many of its students last year by closing schools. Online classes hurt less affluent students and those of color the most.

"We just let them drift for a year," Hands says. "I hope we realize what a huge mistake that was as a society."

“Center Stage, with Milfred and Hands” features Scott Milfred, the newspaper’s editorial page editor, and Phil Hands, the State Journal's political cartoonist. They offer their perspectives from the sensible center of Wisconsin politics. They also serve on the State Journal editorial board.

Find and follow “Center Stage, with Milfred and Hands” on Apple Podcasts, iTunes, Stitcher, Google Podcasts, Spotify or your favorite podcasting app. You also can listen to past episodes of "Center Stage" and see the podcast's webpage by clicking here.