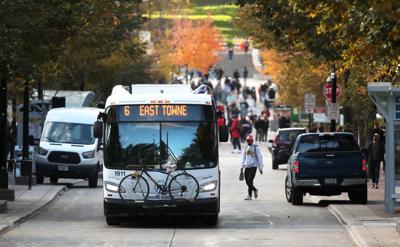 Madison’s mayor has refused to compromise on even a few blocks of her more than 15-mile route for bus rapid transit across the city.

This isn’t just the mayor’s decision, at least it shouldn’t be. And this isn’t just about streamlined bus travel to boost ridership and avoid gridlock on the narrow Isthmus, which is widely supported, including by our State Journal editorial board.

This is about the future of all of Madison — especially its Downtown — and about more citizens having a say and being heard.

The City Council tonight is appropriately asserting itself to ensure that the mayor’s bus rapid transit (BRT) line gets done right and stays off State Street, as every former living mayor, most Downtown business owners and countless citizens across the city have championed.

Council President Syed Abbas and Alds. Sheri Carter, Barbara Harrington-McKinney, Charles Myadze and Mike Verveer have sponsored an amendment to the proposed city budget requiring council approval of the BRT route before money can be spent to build it. The amendment would instruct city staff to develop an alternative to the mayor’s preferred route Downtown, moving BRT and its 60-foot-long buses off State Street to the “outer loop” of the Capitol Square.

Good start toward a grand promenade on State Street

The amendment is unfortunate but necessary. We urge the council to approve it — or something similar — that requires options for the public and City Council to consider. If the mayor had adapted to growing concerns about the BRT and its huge, six-figure stations with concrete platforms crowding the top of State Street, this could have been settled long ago.

Instead, a showdown is looming tonight.

Don't let the loudmouths scare away school board candidates

The mayor claims her preferred route running through the top of State Street is somehow more “equitable.” But the sponsors of the budget amendment represent several of Madison’s most diverse neighborhoods, some of which wouldn’t be directly served by the initial BRT line. They should know better than the mayor what their constituents want, and they deserve answers to how the BRT complements the larger bus system.

The mayor also is warning that allowing the City Council and its constituents an alternate option for the Downtown route will delay and jeopardize the entire BRT project. Her administration floats the possibility of Democratic Gov. Tony Evers losing his reelection next year, only for a Republican successor to cancel the BRT. That would be similar to former GOP Gov. Scott Walker rejecting federal money for a high-speed train to Madison a decade ago, the mayor suggests.

But the current schedule for BRT is already susceptible to that risk. Construction of the BRT isn’t scheduled to begin until late 2022, according to Metro Transit, with operations starting in 2024. The next governor will be elected in November 2022.

Metro Transit also claims it can’t launch new routes during winter, which could cause further delay. That’s unconvincing: Madisonians ride the bus every season of the year.

The mayor should be more concerned about her own reelection bid in spring 2023 than she is Evers’. A little cooperation would go a long way toward pleasing a majority of city voters. Madison deserves a grander vision for Downtown than parades of 60-foot buses taking up so much prime, public space on State Street at the expense of a true pedestrian mall.

The scariest things about Wisconsin politics

Milfred and Hands offer chilling commentary on the most frightening things about politics on the left and the right in Madison, across Wiscons…

Dear Editor: During these challenging COVID times, I thank the leaders and staff of the Madison Community Foundation, on whose Board of Govern…