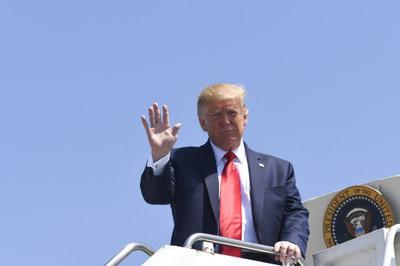 The annual federal budget deficit is soaring toward $1 trillion, with total debt near $22.5 trillion.

That’s the wrong direction for America — especially for our children and grandchildren, who will get stuck with the bill.

President Donald Trump pledged to eliminate the national debt in eight years. Instead, the debt is rising to record heights in the third year of his presidency, with few in Washington seeming to care.

That can’t continue. Wisconsin’s congressional delegation must address this unsustainable path, with citizens demanding answers. Wisconsin is a swing state expected to play a prominent role in picking the next president in 2020. Any candidate for federal office should be grilled on our nation’s shaky finances whenever they campaign here.

The Congressional Budget Office last week projected a $960 billion federal budget deficit for 2019, which will grow to more than $1 trillion in 2020. Over the next decade, annual deficits are expected to total more than $12 trillion, pushing America’s IOUs well above $30 trillion. That’s roughly $85,000 of debt for every man, woman and child in the country.

And this assumes our economy won’t fall into recession. During the last decade of steady growth, our leaders in Washington should have been improving the federal government’s finances, preparing for an eventual downturn. Instead, they’ve made matters worse by increasing spending and reducing taxes. That has left a deeper hole, with no cushion to absorb an economic blow.

Trump isn’t helping with his trade wars, which have hit Wisconsin farmers and manufacturers hard. Trump’s chaotic approach to governing and international affairs leaves business people around the globe on edge, making them less likely to invest and expand.

At the same time, many of the Democratic candidates for president want to go on a spending spree — especially U.S. Sens. Bernie Sanders of Vermont and Elizabeth Warren of Massachusetts. How will they pay for free health care and college if our nation can’t come close to paying for what it already offers its citizens?

America badly needs some fiscal sanity, something neither political party seems willing to deliver. The bipartisan budget deal that Trump signed into law earlier this month will add about $1.7 trillion to the federal debt over 10 years, according to the CBO. The nonpartisan federal agency also predicts slower growth of 1.8 percent over the next four years, and annual budget deficits “well above the average over the past 50 years.”

Trump boasted in 2016 he could eliminate what was then $19 trillion of federal debt “fairly quickly.” Like so many of his claims, it was fantasy.

In the 2020 primaries, Republicans will be able to vote for a presidential candidate who has questioned Barack Obama’s birthplace, stoked host…

China Daily: Cooperation helps and confrontation hurts both the US and China

President Trump announced a trade deal with China he called "tremendous" or "tremendously" positive 15 times. The details look far more modest to us ...

Amid the theatrics of impeachment and opposition to impeachment, both parties took the time over the past two weeks to do what they always do:…

New York Newsday: The 2020 G-7 at a Trump golf resort? Has he read the Constitution?

So President Donald Trump wants to use his Doral luxury golf resort outside Miami for next year’s G-7 meeting.

WASHINGTON — A question for this moment: If the Earth’s lungs were on fire and the doctor refused to treat it, would there be cause for a thir…

S.E. Cupp: The Trumping of a group of gay conservatives

Washington Post: The hype over possible U.S.-Iran talks obscured something much more ominous

Israel escalating conflict risks damage to US interests and war

Marc Thiessen: Trump and Biden have the same message: You may not like me, but you must vote for me

WASHINGTON — During a recent speech in New Hampshire, President Trump unveiled a new campaign line: “Whether you love me or hate me, you have …

Doyle McManus: Hello Donald? This is the Ayatollah calling

Hello Donald? This is the Ayatollah calling

St. Louis Post-Dispatch: Trump’s trade war is devastating farmers. They should remember that in 2020

Leonard Pitts Jr.: We were told our institutions would save us

Once upon a time, there was an ideal. It was called the United States of America.