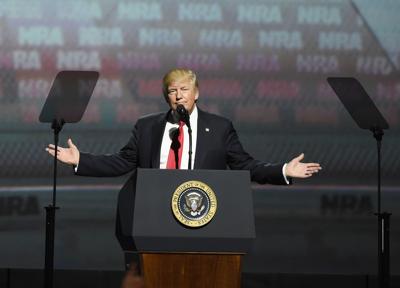 The latest Marquette Law School poll should serve as a warning to President Donald Trump and encourage more Republicans to support reasonable limits on guns.

Trump is trailing his top Democratic challenger, former Vice President Joe Biden, by 9 percentage points — 42 percent to 51 percent — among registered voters in Wisconsin, a crucial swing state in the 2020 election. And based on several questions about gun control in the statewide survey, the Republican president’s inaction on mass shootings isn’t helping his reelection chances.

According to the Marquette poll released last week:

Congress returns to Washington this week with gun legislation at the top of its agenda. The Democratic-controlled House has already passed universal background checks. But without a strong push from the president for sensible laws to help deter mass shootings, they stand little chance of getting through the GOP-run Senate.

So what is Trump waiting for? He said he wanted stronger background checks after last month’s horrific mass shootings in El Paso, Texas, and Dayton, Ohio, which killed more than 30 and injured dozens in less than 24 hours. But after the National Rifle Association objected, Trump wimped out.

The president must show some courage.

Trump said he supports “red flag” laws, allowing family and in some cases police to petition the court to take guns from individuals who pose extreme risk. But now that some gun groups and lawmakers are opposed, the president is waffling again.

Trump has favored a ban on assault weapons in the past. But now he claims there’s “no political appetite” for a ban. That’s not true. Wisconsin is hungry for banning military-style guns, which helped the El Paso and Dayton killers maximize their carnage. The Marquette poll showed 57% support, compared to 40% in opposition. And a national poll shows most Republicans favor such a ban.

Congress should start with consistent background checks and build from there. The Marquette poll found sweeping support in Wisconsin for universal checks on private gun sales. Among Republican voters, support was 74%. Virtually all independents — 94% — favor such legislation. So do 81 percent of rural voters, 76 percent of conservatives, and more than half of “very conservative” voters, according to the Marquette poll.

Our wishy-washy president needs to show some resolve. His top priority is reelection. And for that to happen, he’ll need to win Wisconsin.

Voters here won’t like to hear that Trump signed a resolution in 2017 making it easier for mentally ill people to get guns. They won’t like his big talk, followed by inaction, as mass shootings tear apart innocent lives nearly every two weeks, including this summer near Chippewa Falls.

Trump should finally buck the NRA and side with the vast majority of voters in Wisconsin and across our nation who want stronger gun laws to deter the senseless slaughter.

The number of cities devastated by a mass shooting continues to grow. Dayton, Ohio, and the Texas cities of El Paso and Odessa were added this…

Philadelphia Inquirer: A distraction, not an answer, on guns

Leonard Pitts Jr.: We were told our institutions would save us

Once upon a time, there was an ideal. It was called the United States of America.

Even many staunch defenders of the Second Amendment agree that firearms and the potentially mentally ill should not mix.

Is President Trump going to get Joe Biden elected?