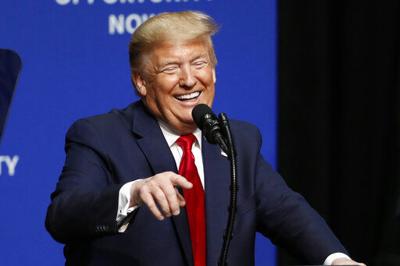 While campaigning for the White House in 2016, the New York developer and TV star boasted he could eliminate the entire national debt “fairly quickly,” which he defined as eight years.

The national debt was $19 trillion back then. Today, it totals $23.3 trillion and continues to soar, according to the U.S. Treasury.

That’s a big promise broken — especially for our children and grandchildren, who will get stuck with the bill.

After Trump was elected in 2016, his first budget predicted the annual federal budget deficit (which was running above $600 billion at the time) would fall to $456 billion by 2021. Instead, Trump’s budget plan for 2021, unveiled this week, predicts the deficit will be $966 billion — more than twice as large. And even that assumes rosy annual economic growth of 2.8%. The nonpartisan Congressional Budget Office is predicting 2.2% growth, which would be down slightly from the 2.3% growth recorded in 2019.

“What the president’s budget does best is illustrate how deep the fiscal ditch has become over the past three years and how difficult it will be to get out of it without putting everything on the table,” said Robert Bixby, executive director of The Concord Coalition, a budget watchdog group.

Today’s bad budgeting can’t be pinned on Trump alone, of course. While the president and his fellow Republicans pushed through tax cuts that have hurt the Treasury and increased the debt, Democrats have demanded — and in many cases received — higher spending on domestic programs, while Republicans have insisted on greater defense spending.

“Even with rosy economic assumptions and proposed spending discipline that flies in the face of recent experience, the president’s budget would still be in deficit over the next 10 years,” Bixby said.

It’s one thing to run up large deficits when the economy is in recession. But with Trump in charge, Washington has pushed annual budget deficits above $1 trillion despite a growing economy that’s similar to the one he inherited three years ago.

Trump claims his budget request this week “sets the course for a future of continued American dominance and prosperity.”

In fact, his borrowing binge has done just the opposite. It has weakened our nation’s power and influence. Our nation borrows 22 cents of every dollar it spends.

Wisconsin’s congressional delegation must demand a fiscally responsible budget, which will require the hard work of negotiation and compromise. At the same time, voters this fall should compare Trump’s fantasy fiscal claims with the hard facts that undercut them.

Things are not going swimmingly for the Democrats right now.

Wall Street Journal: Sanders has staying power -- even if most Democrats prefer someone else

The good news for democracy Tuesday was that in New Hampshire they know how to count votes. That’s especially good news for Bernie Sanders, wh…

Cynthia Tucker: We must vote to remove Trump, no matter what

Once upon a time, black American voters were the quintessential pragmatists, casting their ballots for the candidate who seemed — if not more …

Center Stage: Chocolates and roses for Trump and all the politicians on Valentine's Day

On this week's political podcast, Milfred and Hands promise to say only nice things about our leaders, including the president, governor, top lawmakers and Madison mayor. It wasn't easy. But they mostly pull it off.

The problem with Bernie Sanders goes beyond the 's' word

The most frequent knock on Bernie Sanders’ bid for president is that he’s a socialist.

CHICAGO — As “Joe Biden” and “senility” become twins in voters’ minds, like macaroni and cheese, Biden got into a verbal brawl with a Michigan…

Vote blue, no matter who.

CHICAGO — Now that President Donald Trump has commuted the prison sentence of former Illinois Gov. Rod Blagojevich — who shook down a children…

OUR VIEW: With no deal for spending extra revenue, state can guard against downturn