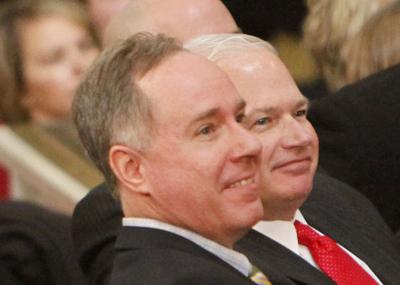 Democrats won every statewide race on Tuesday’s ballot in Wisconsin. It was a sweep at the top of the ticket, with the party winning the offices of governor, attorney general and U.S. Senate.

Yet Republicans expanded their majority in the state Senate, and maintained commanding control of the Assembly, losing only a single seat.

That’s partly because the Republicans ran strong candidates in some districts, and because many Democratic voters are concentrated in urban areas.

But mostly the Republicans’ big advantage in the Legislature is the result of cheating. As much as Senate Majority Leader Scott Fitzgerald, R-Juneau, and Assembly Speaker Robin Vos, R-Rochester, still try to deny the GOP rigged legislative voting districts to their favor, they can’t be taken serious.

Vos arrogantly called his party’s blatant gerrymandering following the 2010 census a “made-up issue” last week. But reams of documents, which top Republican lawmakers tried to hide from the public, show that their scheming included elaborate analyses of how moving around the boundaries of key voting districts in the Assembly and Senate could artificially generate partisan advantage for the GOP. The Republicans have wasted millions of state taxpayer dollars on lawyers to help draw and defend safe seats that can withstand accountability from voters.

Voters across the political spectrum say they want a neutral process instead. Voters in conservative Winnebago and Lincoln counties, for example, overwhelmingly supported nonpartisan redistricting Tuesday in local advisory referendums. Well over half of all Wisconsin counties have supported similar measures.

Democratic Gov.-elect Tony Evers ran on a pledge to end gerrymandering. That means Vos and Fitzgerald’s days of thwarting the public’s will are numbered. Evers favors the creation of a nonpartisan and independent commission to draw maps after the 2020 census. He should stick steadfastly to this honorable position and veto any maps drawn by Vos and Fitzgerald that are designed to protect politicians from voters.

That’s what Vos and Fitzgerald’s legacies as legislative leaders will be remembered for most if they continue to resist the Iowa model for drawing fair maps, which relies on an independent agency to create neat and orderly maps that follow municipal and county lines as much as possible, while ignoring the partisan interests of politicians from both parties.

Republican Attorney General Brad Schimel emphatically told the State Journal editorial board last month that the Legislature “absolutely” can adopt the Iowa system if it so chooses.

And it’s not just legislative lines that have been rigged to favor Republicans specifically and, more generally, the incumbents of both parties. Wisconsin’s congressional districts also are shaped to shield politicians from fed-up voters. Not a single race for Congress across Wisconsin was decided by anything less than double-digit margins Tuesday.

It is definitely time, with a new governor taking office, for Vos and Fitzgerald to drop the ruse, respect voters and adopt the Iowa model for drawing fair voting district maps in Wisconsin.

David Daley: Americans agree on one thing -- they hate gerrymandering