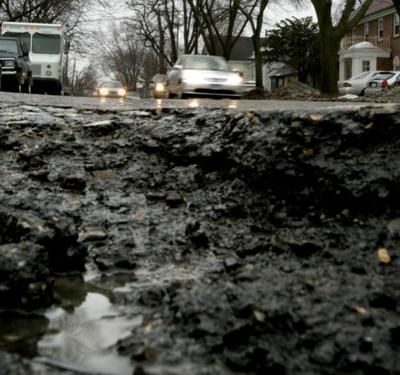 If you want good roads, you have to pay for them.

And it’s not just the politicians in Madison and Washington, D.C., who have failed to learn that lesson.

It’s the people in Wisconsin, too.

The latest Marquette Law School poll, released last week, found that nearly two-thirds of respondents — 64 percent — said the roads where they live are in fair (34 percent) or poor (30 percent) condition.

That’s not surprising, given that Gov. Scott Walker has reduced spending on transportation during his eight years in office while refusing to increase the gas tax or vehicle registration fee, which largely pay for road maintenance and construction.

Wisconsin now ranks near the bottom — 44th out of the 50 states — for road quality.

Unfortunately, nearly as many people who say their roads are in bad shape also say they don’t want to pay more to improve them.

The same Marquette poll, which surveyed 1,000 registered voters across the state this month, found that close to two-thirds of respondents — 61 percent — oppose higher gas taxes and registration fees. Not quite a third — 32 percent — favored higher user fees to increase spending on roads.

Even among those respondents who think roads are in poor condition, less than half — 48 percent — support higher fees to improve the pavement.

So maybe Wisconsin drives on the bad roads it deserves.

But conditions are only going to get worse, because even our current and inadequate spending levels at the state and federal levels are propped up by excessive borrowing. Wisconsin was spending 11.5 percent of its transportation revenue on debt payments before Gov. Walker came into office in 2011. Eight years later, the state is spending 21 percent of its transportation dollars on debt payments.

So even if we keep collecting the same amount money as we used to, it won’t go as far because more and more gets syphoned away. And if anything, the current state gas tax of 32.9 cents per gallon, which has been flat since 2006, is only going to bring in less revenue in the future. That’s because more fuel-efficient and electric vehicles will pump less or no gas.

It’s time to get real.

The simplest way to bring in more money is for Wisconsin to raise its gas tax for the first time in a dozen years. But a more sustainable solution is to charge motorists based on the mileage their vehicles travel each year. The governor’s own study commission recommended that five years ago, along with higher fees on big trucks, which cause the most wear to roads.

Open-road tolling on the interstate system is another strong option. As the gas tax erodes, tolling would keep out-of-state tourists and over-the-road trucks contributing to the major highways they heavily use.

Despite the public’s apparent disdain for higher fees, responsible voters should recognize that inflation and more traffic increase cost. They should vote for candidates who have the courage to support a fiscally responsible solution.

At the same time, the politicians must show real leadership. Often, that requires making hard decisions that may not be popular but are necessary.

Without more revenue, Wisconsin’s roads will continue to crumble.

OUR VIEW: Six lanes are needed to keep traffic moving safely and efficiently on I-39-90

Hands on Wisconsin: Something must be done about our crumbling roads

A recent poll found that around 60 percent of people in Wisconsin think the condition of our roads is a serious problem. A similar percentage …

Wisconsin is finally serious about fixing its roads