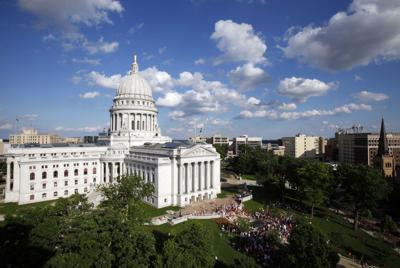 We’ve published experts on butterflies, Abraham Lincoln and the finer points of Wisconsin’s health care system during the last year.

We’ve featured the writings of business and union leaders, politicians of all stripes and tribal members.

A farmer, golf instructor, psychologist and advocates for property rights, school choice, good government and the environment have all written longer, opinionated columns for our editorial pages during 2019.

The list is long, diverse and impressive. And we hope you have enjoyed and learned as much from them as we have — even if you don’t agree or remain skeptical.

With so much of social media and cable television catering to and reinforcing narrow if not exclusively partisan perspectives, your daily Wisconsin State Journal continues to provide a wide range of views on often complicated and controversial issues of the day.

Today we honor our guest writers from the past year by publishing their names. We also list our syndicated national columnists. And in Sunday’s newspaper, we will publish more than 1,000 names of every person who has had a letter to the editor published in the Wisconsin State Journal during 2019.

Center Stage: Sing along with this year's political Christmas carols

Please continue to share your views and engage in the civil and healthy dialog that our newspaper provides — in print, on madison.com, on your phone and across multiple digital platforms and apps.

Here is this year’s list of more than 135 guest columnists:

Sandra Adell, professor in the Department of Afro-American Studies, UW-Madison

Masood Akhtar, Muslim activist and founder of the group We Are Many — United Against Hate

April Barker, attorney with Schott, Bublitz and Engel in Brookfield. She is co-vice president of the Wisconsin Freedom of Information Council

Mark Borchardt, of Marshfield, founder of 80 Feet Is Enough, a group advocating for property rights in Wisconsin

Tim Cullen, chair of the State Governing Board of Common Cause in Wisconsin and former state senator

Dirk Debbink, of Oconomowoc, retired vice admiral and former chief of the Navy Reserves, and fellow at the American College of National Security Leaders

Will Flanders, Wisconsin Institute for Law and Liberty

Fritz Grutzner, chair of the United Way of Dane County

Jay Heck, Common Cause in Wisconsin

Andrew Hitt, chairman of the Republican Party of Wisconsin

Bill Lueders, president of the Wisconsin Freedom of Information Council

Seth Masket, Center on American Politics at the University of Denver

Peter Navarro, assistant to the president for trade and manufacturing policy

Karen Oberhauser, director of the Madison Arboretum and expert on monarch butterflies

Sonny Perdue, secretary of the U.S. Department of Agriculture

Drew Petersen, president of the UW System Board of Regents

Dan Stier, former chief legal counsel for the state Department of Health Services and national director of the Network for Public Health Law

David Ward, director of government affairs and dairy for the Cooperative Network

Noah Williams, Center for Research on the Wisconsin Economy, UW-Madison

Our many syndicated columnists hail from across the country with journalism chops and unique perspectives. Those with single asterisks by their names have won the Pulitzer Prize for commentary. Those with double asterisks were finalists:

Houston Chronicle: String of attacks on Jews in New York remind us of the need to love one another

The rise in anti-Semitism should be met

with a greater force we all help spread

Chicago Tribune: Trump takes out Iran’s architect of mayhem. Now can he de-escalate?

Thank you to all 1,130 of our letter writers

OUR VIEW: Today we honor all those readers who contributed letters to the editor during 2019 by publishing their names in the newspaper and on madison.com. Please continue to engage, challenge and call for action during 2020