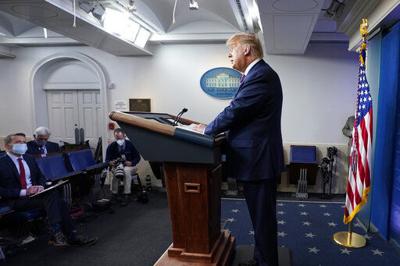 Go ahead and recount Wisconsin’s vote for president, assuming Donald Trump is paying for it.

Wisconsin has a strong record of running honest elections, as a careful review of the Nov. 3 vote almost certainly would show.

President Trump is imagining a partisan plot that cost him Wisconsin and other swing states he needed to win the White House. (Similarly, Trump falsely claimed fraud when U.S. Sen. Ted Cruz, R-Texas, narrowly defeated Trump in the Iowa caucuses in 2016.)

Trump and his allies have cited “irregularities” in the Nov. 3 vote but provided scant evidence that anything is amiss. All evidence in the Badger State so far indicates Trump simply lost the race — fair and square — to President-elect Joe Biden.

Turnout was higher in 2020 than in 2016 (though not as high as in 2004). Fewer third-party candidates of consequence were running. The biggest change this election was the pandemic, which convinced more than half of voters to cast ballots early and through the mail or at drop-off sites to avoid potential exposure to the coronavirus.

None of that, on its face, should raise suspicion. Voting patterns across the state were remarkably similar to 2016. Yet Biden collected just over 20,000 votes more than Trump, which is similar to the narrow margin of victory Trump held over Hillary Clinton four years ago — and which withstood a challenge back then.

Trump certainly has the right to force a recount here. But history suggests he’d be wasting his money.

Back in 2016, a recount of the race for president in Wisconsin changed the net result by just 131 votes out of 3 million cast. Similarly, in 2011, a recount of a state Supreme Court race produced a net change of just 312 votes out of 1.5 million.

Skeptics have pointed to the 14,000 votes in Brookfield that were notoriously left out of an initial election night tally for that court race in 2011. But the error was caught the next day, and an elaborate investigation determined the flub was unintentional.

Here's who really won and lost in this election

Wisconsin moved on, confident the final results were accurate.

More recently, in 2018, an audit of more than 135,000 ballots from 186 randomly chosen sites in Wisconsin uncovered no problems.

Election officials in Wisconsin’s 72 counties should finish their careful tally and review of the Nov. 3 vote by Nov. 17. Then the Trump campaign will have a day to decide on a recount. Trump would have to pay the cost in advance — more than $2 million — because his margin of defeat is greater than 0.25 percentage points, a threshold set by the GOP-run Legislature.

It’s always possible mistakes by humans or computers could be uncovered. But much more likely, based on Wisconsin’s tradition of clean elections, is Biden’s victory will stand.

Bad marriages usually lead to ugly divorces, and that’s where the GOP is heading.

The front page of The New York Times probably hit him hard this week: “Election Officials Nationwide Find No Fraud.”

CHICAGO — When he first ran for president, Barack Obama evoked fervent loyalty and extravagant dreams in many people. As the first black presi…

More Americas say they are independent

than loyal to one of the major parties

Wisconsin continues to see an “unrelenting rise in cases and test positivity,” according to the White House Coronavirus Task Force Report. The…

Sen. Howard Marklein should be a stickler, not a softie

OUR VIEW: His appointment to lead budget committee mirrors shift in Republican influence across state

S.E. Cupp: Vengeance? No. Consequences? Yes. How to handle the post-Trump era

Much has been written about the art, ethics and prudence of revenge.

Don't give the Madison City Council a five-fold pay raise to $67,950