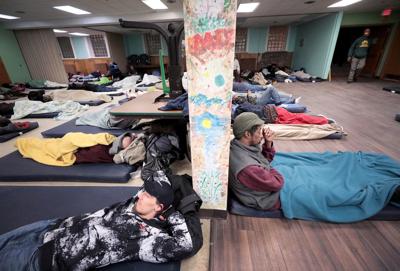 Plans for a modern homeless shelter on Madison’s Far East Side look promising, though a lot more work and cooperation will be needed to get this done.

Ideally, such a facility would be closer to Downtown, because that’s where homeless men tend to congregate. Some have jobs but can’t afford an apartment or can’t find a landlord who will rent to them. Many have mental health, drug or alcohol problems. Some are destitute with nowhere to go.

For decades, homeless men have spent cold winter nights in church basements on or near the Capitol Square. But cramped bunks in hodgepodge spaces risk exposure to COVID-19. Even before the pandemic hit, the church facilities were dated and difficult to manage. They lacked the privacy, flexibility and access to resources that a modern shelter can offer.

The mayor and county executive are committing $3 million each in their budget proposals to jumpstart the noble effort. Buying the East Towne Boulevard property would cost $1.3 million. An adjacent site might run an additional $700,000, leaving $4 million for interim renovations and further development.

Finding a workable site hasn’t been easy. Plans for a men’s shelter Downtown in 2016 fell through after nearby residents and property owners voiced concerns. Any attempt to locate near residential neighborhoods meets resistance.

That why the East Towne Boulevard site, while far from perfect, might be best. The former child care center is behind strip malls. Lots of surface parking, rather than single-family homes, dot the area. A bus line is nearby, offering convenient transportation to the Beacon Day Resource Center on East Washington Avenue.

A double dose of hardship for the homeless

The new facility won’t be ready to open for at least a year, even if all goes as planned. That creates a considerable short-term challenge. City officials say they can’t use a temporary shelter at Warner Park on the North Side indefinitely.

But the longer-term goal of a modern facility is heading in the right direction. Local leaders should keep the momentum going for a more humane emergency shelter that steers struggling people to better lives.

Jonah Goldberg: Liberals panicking over possibility of a 2016 repeat

The 2016 election lives loudly in everybody right now.

Fort Lauderdale Sun Sentinel: The line to vote in Florida stretches here, there and everywhere. A victory for democracy