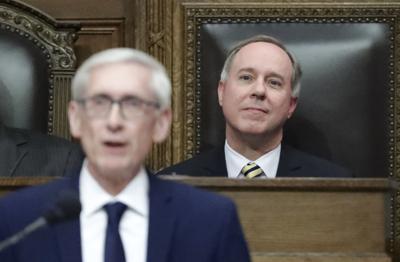 Gov. Tony Evers has now released one day of his emails, having previously denied a similar request.

Good. Keep going, governor. Fully embrace open government, regardless of who is asking for public documents. Our state definitely needs more leadership when it comes to promoting transparency for taxpayers.

In just the last few weeks, the public has learned that Assembly Republican lawmakers wasted $26,500 of state money on lawyers, trying unsuccessfully to deny a request for digital copies of their communications. This is the same GOP-run Legislature that tried to gut the open records law, and has granted itself special permission to delete records and meet in secret.

At the local level, the Madison School District has denied or ignored two dozen requests for public documents from a city resident. The anonymous person sued last month, meaning local property taxpayers could be on the hook for legal expenses if school officials continue to resist compliance.

Some of the items the unnamed person is requesting are as straightforward as “weekly updates” for School Board members, and school improvement plans. Such information is clearly of public interest and doesn’t pose a safety threat. The district should hand over the documents.

Gov. Evers should lead by example so lower-level public servants are more likely to respect the people’s right to know what their government is doing — and so tedious court fights don’t waste public money.

The denial of the records request prompted outcry from public records advocates.

Now Evers’ staff has oddly been citing Walker’s practices as justification for its refusal to release certain records. It has noted that former Gov. Walker refused to provide documents to people who failed to identify a topic or specific key words they were looking for in government emails.

But those requests were much broader than the simple ones Evers has resisted. And why would Evers make Walker the standard for compliance with open government laws? Evers promised to be much better than his predecessor at allowing citizens access to public information.

When Evers’ office finally released a single day of his emails last week — this time to the Milwaukee Journal Sentinel, having previously denied a similar request from WITI-TV (Ch. 6) — it did so with a troubling caveat. It said it was making an exception in releasing the handful of emails, meaning his office wants to reserve the right to deny similar requests in the future. And Evers still hasn’t fulfilled WITI-TV’s simple request.

That’s not a strong example of openness. It’s a sneaky dodge of his office’s responsibilities.

Instead of moving backward or standing still on open government, Evers should lead Wisconsin forward.

It's not the holiday season without political squabbles with family.

Hands on Wisconsin: What are the turkeys thankful for?

Happy Thanksgiving everyone. May your turkey be moist, may your bellies be full, and may your dinner conversation be pleasant. Let's make Amer…

Hands on Wisconsin: Trump might pardon a turkey this year

Will this year's lucky turkey be forced to do a favor for our transactional president before he receives his pardon?

Hands on Wisconsin: Axe is too big for the little Gopher

Bucky is hoping to reclaim the Paul Bunyan Axe trophy after losing it to the Minnesota Gophers last year.

Trudy Rubin: Why the laughter at Trump at the NATO conference wasn’t funny

They were laughing at him, and it made President Donald Trump angry.

CHICAGO — It’s hard to exaggerate the viciousness of what Michael Vick did. While playing for the Atlanta Falcons, the star quarterback financ…

S.E. Cupp: Is impeachment over or is it just beginning?

We are not who we think we are.