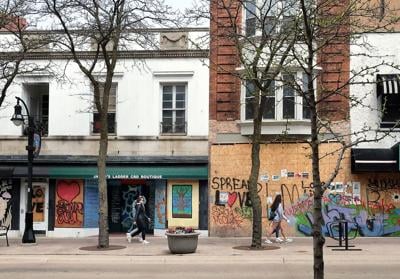 City Hall has needlessly complicated a simple request from Downtown businesses to let people, shops and cafes take over State Street on weekends this summer. The Downtown Business Improvement District wanted to move buses off State when ridership was light to provide more space for fun activities outside, where COVID-19 doesn’t easily spread.

It was a great idea that won’t happen this summer, which is disappointing. City transportation officials resisted the change. Yet the much bigger idea of permanently turning State Street into a pedestrian mall continues to build momentum, which is reassuring. And the Biden administration has proposed spending trillions of dollars on public infrastructure, which could help pay for a grand promenade on State Street similar to Pearl Street in Boulder, Colorado, or Church Street in Burlington, Vermont.

“We would love to see the buses come off State Street, turning it into a more pedestrian-friendly outdoor mall,” said Nick Martin, owner of Ian’s Pizza in the 100 block of State near the Capitol.

It’s a sentiment shared by many, including a slew of Wisconsin State Journal readers who have written letters to the editor in support.

Creating a faster, modern bus system must be a priority, too. The State Journal editorial board has strongly endorsed “bus rapid transit” for years.

But buses often use alternative routes now for special events to avoid rumbling down the middle of State Street. They can stop at cross streets, on the Square, along Langdon and Lake streets, or elsewhere nearby. That will still get riders conveniently where they need to go. In some cases, avoiding State Street could be faster for buses than stopping at a string of red lights on State, waiting for pedestrians to cross.

Remaking State Street into an outdoor mall without street curbs would improve mobility for disabled people and create more space for trees, winding paths, public art and music. State Street would become a public park, rather than a half-mile stretch of concrete. Turning it into a pedestrian mall also could provide more space for rented kiosks in prominent spots. That would give entrepreneurs — including more people of color — opportunities to launch business ventures in the heart of Downtown without having to pay steep rent.

Downtown Ald. Mike Verveer and many of his constituents are thinking big about the possibilities. The mayor and council members who represent neighborhoods away from Downtown should get involved, too, because a healthy city requires a thriving Downtown. A grand promenade on State Street would create a unique attraction for everyone, including tourists.

One thing city officials are getting right is an emphasis on public safety. Crimes such as aggressive panhandling, public intoxication and drug dealing have plagued pockets of State Street. City officials also are working hard to provide more help to the homeless. But until all of the plywood boards come down from storefront windows, State Street won’t draw the big crowds it used to, and it won’t feel as safe.

Madison Mayor Satya Rhodes-Conway is right that the city leans too far toward an “anything goes” approach to bad behavior Downtown.

“It is likely time to have a serious community discussion about moving away from that end of the scale,” Rhodes-Conway told State Journal reporter Dean Mosiman in last Sunday’s in-depth report “Grand ambitions built on harsh experience.”

Discussion is great. Action is even better. Downtown Madison has been hit hard by the pandemic and rioting during the last year. It needs more love and renewal — from City Hall and from the public — to reinvent itself again.

We don’t know what the Biden years will ultimately look like, but one thing is pretty obvious, at least to me: It won’t be a new New Deal, nor…

We never blamed Gov. Andrew Cuomo for COVID-19’s death toll in New York. The virus has claimed more than 50,000 lives, including what we now k…

Steve Chapman: The census shows why we need a bigger Congress

CHICAGO — The preliminary 2020 census count has been released, and as usual, it means that when it comes to congressional representation, some…