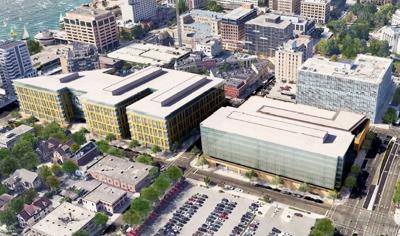 State government owns or leases 4.4 million square feet of space in Madison, most of it Downtown.

That’s the equivalent of about 90 football fields. State offices in Madison could nearly fill the Willis (formerly Sears) Tower in Chicago, which is the second tallest building in North America.

Like employers everywhere, Gov. Tony Evers is wisely rethinking the need for so much room, now that the pandemic has changed traditional assumptions about the world of work.

Many employees in the public and private sectors have worked remotely during the last year to avoid COVID-19. For some workers, that will continue long after the virus is gone. That’s because working from home or the field reduces commuting and can improve efficiency for jobs that don’t require a lot of interaction with colleagues.

The Evers administration’s goal, unveiled last week, is to reduce state facilities by 10% over the next decade. Some state buildings may close or consolidate in Milwaukee. But most of the 400,000 square feet of reduced footprint by 2030 will affect Madison. The reduction in state office space here will be similar in size to the square footage of Camp Randall Stadium.

It’s a big opportunity for Downtown Madison, because it could reduce the number of buildings that go dark on weeknights and weekends. Instead, some state office buildings on prime real estate with lake views could be redeveloped or converted for private use. That could bring a burst of activity, more residents, added tax base and affordable housing units to Downtown.

At the same time, state government could save money by consolidating agencies into newer and less expensive buildings, some of which might leave Downtown. One of the Democratic administration’s stated goals is to lessen Madison’s central role in state government, which is something Republicans have similarly sought to accomplish in the past.

Madison’s economy used to be driven by state government and UW-Madison. But the region’s technology sector has fueled much of the growth over the last decade. Young technology workers for Epic Systems, Exact Sciences and countless start-ups like to live, eat, shop and be entertained Downtown.

A good example of the positive change that can occur in Madison as the state reduces its presence Downtown is the State of Wisconsin Investment Board’s exodus. The agency recently announced plans to leave its two-story Lake Terrace building at 121 E. Wilson St., which overlooks Lake Monona a few blocks from the Capitol. The 75-year-old building, owned by the Wisconsin Retirement System, is “prime to the nth degree Downtown real estate,” says Madison Ald. Mike Verveer, who represents the area and is thinking big about ways to improve the central city.

Several high-profile Downtown developers have expressed interest in commercial, residential and mixed-use projects on the site, which could rise to 10 stories and still abide by the height limit that protects views of the Capitol building.

SWIB plans to move its offices to larger, new facilities on the city’s West Side. Similarly, the Evers administration is considering selling Downtown office buildings that house the departments of Administration, Health Services, Natural Resources and Public Instruction. Those agencies could be relocated and consolidated nearby.

Already, the outdated and ugly GEF 1 building along East Washington Avenue near the Capitol is slated for demolition to make room for a new state history and veterans museum, which would create another exciting construction opportunity at the top of State Street.

The possibilities for Downtown Madison are endless as we defeat the pandemic. The Evers administration deserves credit and support for its foresight.