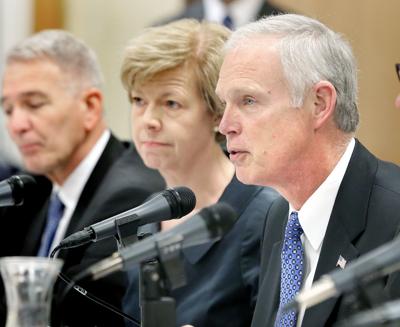 To their credit and with bipartisan support, Wisconsin’s leaders in Washington helped land the military’s most advanced fighter jets at Truax Field on Madison’s North Side last spring. A squadron of F-35s is set to replace aging F-16s in 2023, ensuring the Wisconsin Air National Guard’s 115th Fighter Wing stays here.

Now our state’s congressional delegation — especially U.S. Sens. Tammy Baldwin, D-Madison, and Ron Johnson, R-Oshkosh — need to make sure homes near the runways get some relief from additional noise if the new jets are louder.

The U.S. House of Representatives in July approved a Defense bill with $50 million for sound-mitigation grants to communities affected by the F-35s. U.S. Rep. Mark Pocan, D-Black Earth, Wisconsin’s sole member of the House Appropriations Committee, pressed his colleagues to include the money.

Other communities with F-35s would be able to apply for grants, too. But Madison appears well positioned to receive a significant portion. And rightly so.

That’s because an Air Force study suggested the 115th could expose more than 1,000 homes to higher sound levels, and about half of those residences — mostly mobile homes and low-income apartments — won’t qualify for money to insulate their buildings through a Federal Aviation Administration program, according to a city analysis.

“If they’re creating a problem for homes,” Pocan told our State Journal editorial board this month, “my theory is: You break it, you bought it. Right? You should have to provide some assistance to those folks.”

Madison is in the pilot's seat to land F-35s

Some of the federal money could pay for a noise study to determine the impact of the F-35s, which has been debated for years. The Air Force study estimated the F-35s would be about 5 decibels louder than the current F-16s on takeoff. But it generally takes a change of about 3 decibels for people to notice. A careful study could show the real effect.

It’s possible the impact will be minimal. A report and letter from the Air Force to Baldwin suggested an increase in flights is expected while pilots are being trained on the F-35s. But after training is done, the number of flights would fall closer to what occurs now. Critics who live near the airport remain skeptical.

Hands on Wisconsin: Look on the bright side of the F-35s

Baldwin helped bring the F-35s to Madison and sits on the Senate Appropriations Committee. Her staff last week expressed support for keeping the $50 million in the final Defense bill sent to the president. Johnson, another supporter of the jets, should get behind the $50 million, too — both for fairness to local residents most impacted by noise, and to help ensure the 115th Fighter Wing’s mission of protecting our nation proceeds smoothly.

The $50 million could help quantify how loud the jets are and serve as a safeguard for the North Side. Baldwin and Johnson need to get this done.

“Trump’s likely RBG replacement, Amy Coney Barrett, is a Catholic extremist with 7 children who does not believe employers should be required …

for field operations and data reporting

for zero-emission vehicles by 2035

The corruption, the hypocrisy and the mendacity that flow from the Cult of Donald Trump are so staggering as to overwhelm, exhaust and finally…

Sen. Jeff Smith: How “doing nothing” works for politicians

EAU CLAIRE — While scrolling through social media recently, I saw someone ask, “Why hasn’t Governor Evers distributed funds from the Heroes Ac…

Dane County and UW need a united front against the coronavirus

OUR VIEW: Stop bickering, work together to fight COVID-19 around campus and in Downtown Madison

Take the F-35 jet test before it lands in Madison

F-35 experience in Madison will be similar to F-16s

OUR VIEW: The benefits of landing America's most advanced fighter jet in Madison far outweigh any nuisance