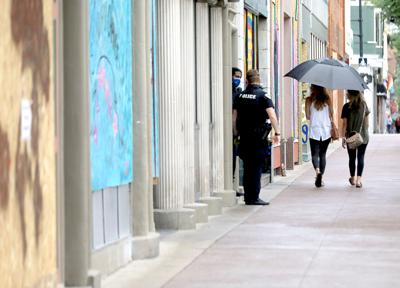 Our city must not allow all of that progress and improvement to slip away because of the ongoing coronavirus pandemic, senseless violence and vandalism.

The City Council absolutely should support the $500,000 Downtown Recovery Plan, which its Finance Committee wisely recommended last week. The proposal would help small business and property owners with the cost of repairing their businesses, which the city failed to protect as police tried to deescalate skirmishes with unruly crowds. Many stores lost windows and merchandise to rioters and looters following the Minneapolis police killing May 25 of George Floyd, an unarmed black man.

Protesters of police brutality have been mostly peaceful. But late-night mobs have tarnished the demonstrations by throwing rocks, starting fires, toppling statues to noble causes and, on Tuesday night, beating a state senator outside the Capitol.

The harassment of store owners along State Street and the Capitol Square also is disturbing, given how important the central city is to jobs and the larger economy affecting everyone. About 70% of State Street’s businesses are locally owned, and 62% are owned by women or people of color. State Street is a diverse and signature urban landscape for all to enjoy.

The Downtown Recovery Plan would offer grants of up to $25,000 to cover the cost of repairs that insurance doesn’t. A group of Downtown merchants also is backing efforts to increase the number of Black and minority-owned businesses. They want the city to improve safety, add more security cameras, remove rocks from planters and better maintain a park.

Taking buses off State Street to create a promenade for more people to eat, stroll and shop is another strong idea. The State Journal editorial board has long endorsed the creation of a grand pedestrian mall the entire length of State Street. The additional open space would make it easier and safer for businesses to sell food and products in the open air, as fears of catching the novel coronavirus indoors continue. It also would help foster a big-city vibe, which helps to attract creative young people.

Critics of helping Downtown businesses warn that the city budget will be tight. The pandemic forced many businesses to close and kept people at home, sending the economy into recession.

But a healthy central city is crucial to the economic vitality of the entire region. And it’s a big draw for tourism and Madison’s technology sector, a driving force behind the region’s prosperity.

Critics say the city must invest in minority communities before Downtown. But a forgivable loan fund for Black business owners is making its way through city committees, too.

Refunds for occupancy, food and liquor permits are justified Downtown, given that so many businesses have been unable to operate, or have done so at limited capacity. We like Ald. Mike Verveer’s idea of a special tax district to fund improvements.

State Street and the Capitol Square are the heart of our city. They demand our attention and protection because so much of what happens Downtown affects all of Madison’s success.

California, again, is leading the nation’s fight against climate change. The California Air Resources Board adopted a rule Thursday requiring …

As the Trump campaign flounders under the accumulated weight of the pandemic, the economic crisis, the mass protests and a Twitter account plu…

S.E. Cupp: S.E. Cupp: Does Trump still care about his base?

If you’re a white supremacist, racist, or just feeling insecure about your status as a white man in America, the president of the United State…

Center Stage: Sheri Carter on police, protesters and what white people don't get about the black experience in Madison

In this week's political podcast, Madison's first African American female City Council president talks about where Madison must go from here with Milfred and Hands